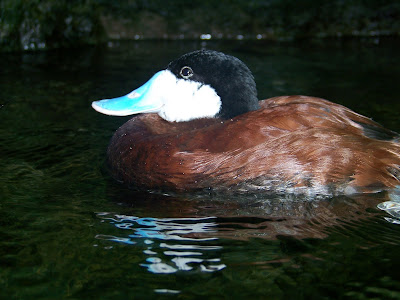 In 3, Britney Spears claims Livin’ in Sin is the Newest Thing.

From my perspective, Duck Hunting is the newest thing.

I keep the pulse of hunting...and other less important things, too. Identifying trends is something I am very good at and have been since I was but a lad, and the amount of outdoor literature I consume in a month is exhaustive. Doesn’t matter if it is elk or squirrel hunting, I Hoover it up.

Hunting fads have swept in and out over the last two decades, most of it relating to deer. In the mid-90’s and into the 2000’s, everyone wanted to be a bowhunting Chuck Adams extraordinaire. TV shows, Internet forums, magazine articles. It stuck with some, but a great many sets of archery tackle landed in pawn shops. The machismo of it has largely, mercifully, passed by - Archery Close.

Thanks to QDM, in a matter of five or six years everyone became Boone & Crockett experts and turned their noses at shooting less-than-mature bucks. Folks who probably hadn’t seen a buck score over 100 were suddenly seeing 140-150 class bucks on each outing and that old 8 point in the Gun Store would easily go 160. Again, this phenomenon is still breathing, but not with the gusto with which it reigned just a few years ago. Yes, you still hear about it...but not as much. See my point?

Some things the outdoor media continues to push just won’t get much footing in my part of the world. Predator hunting is one. I try every year – and enjoy it – but it’s lonely company. AR-Style weapons for hunting, despite the pleas of the NRA and NSSF, just aren’t catching fire the way they’d want. Duck hunting, though, is en fuego.

I can’t quantify this, of course. You’ll have to take my word for it. Or better yet, check out the outdoor forums and blogs. There has been an increase in duck chatter. A lot of people out for their first trips. Everyone has a DU decal on their rear windshields. Each year another friend contracts the Duck Hunting Disease. And why not?

Deer hunting has lost a lot of democratic appeal thanks, in part, to QDM and bowhunting. The woods became crowded and restrictive – not everywhere, but it has become more difficult to justify your time on public land when game agencies are instituting point rules and every flop with a stick and string is stalking down fire lanes trying to arrow a buck. The economy is the other factor. Leases have become right pricey even though the prices have hardly changed. Folks tend to be bailing towards other pursuits. (The upside for serious deer hunters on these lands is that it will eventually open back up where it’s not so jam-packed.)

Duck hunting can be a local activity with high chances of success on public land. With the exception of Montana, all of my duck hunts this year were on public waters and I had a blast. Especially in Florida, if you can’t find a place or two to bust beaks, you probably aren’t trying all that hard.

And duck hunting appeals in a lot of different ways from guns to gear to decoys...you can recklessly buy and waste money until you’re divorced. The hunts are fun. It’s social networking compared to still hunting. You’ll probably shoot more in one morning than a season of deer hunting. Photos of dead game animals and bragging to friends. It’s pure Horatio Alger and folks are taking advantage. The media isn't far behind.

Keep an eye out for it; I promise you this is happening.

I had an immensely enjoyable 2010-11 Duck Season. From STA ¾ in South Florida to Montana and back – all new experiences. Except losing the Sea Duck Tournament. Still stings. And familiar.

Such a fun year, though.

It was almost sinful.

Very well written, Ian. I have to say, from the blogs, forums and magazines... heck, even TV shows you hit the nail on the head. I see it ALL over. I am one of the few who is not a duck hunter. The bowhunting thing has always been my love and hopefully always will be. So, for you duck hunters, get out there and slay some winged feather dusters and enjoy yourselves!

I love deer hunting, but if I had to choose between ducks and deer it would be hands down avian style... I did enjoy checking out the mergansers from the sea duck hunt post, we usually associate those as "let em go" ducks.

Whenever you'd post, I'd check to see where your blog was but never found it. I got here through Trey Luckie's site, take care.

I blame the Outdoor Channel and The Duck Commander! :)

Albert, I will say, there is a certain satisfaction to taking a game animal by bow...for sure.

DEDH - glad you found it, and thanks Trey. The merganser hunt is one of those ludicrous things we started one year. Kinda like our moorhen hunt in September.