The Waterfowl of Montana 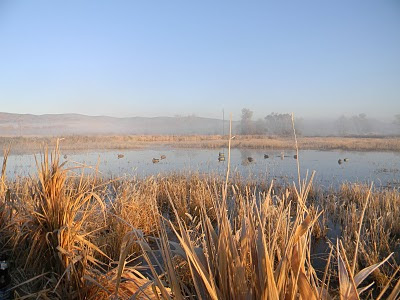 Mallards are big ducks that get swallowed in the steel blue of the Montana dawn, especially as they circle against the backdrop of a distant mountain or foothill. A pair of drakes had looped Cliff Pond a half-dozen times before dropping from the air that’s as fresh and thin as a July bride. They cupped up and bombed towards the decoy spread as we waited motionlessly, fingers on the trigger and breaths rolling out of the blind.

I did not fly to Montana to duck hunt. I flew to Montana to see Montana. And because Harris invited me to this beautiful 1000-acre private ranch near the Lewis and Clark country of Three Forks and Willow Creek. The hunting was strangely an afterthought in my mind. After four mornings of waterfowl hunting, my next trip will definitely concentrate on duck hunting, no question. 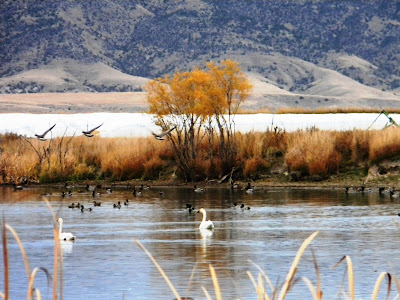 The waterfowl is mindboggling. My Lord, the ducks! In the rivers and irrigation ditches near the ranch, thousands of greenheads puddled with wigeon, gadwall, coots, Canada geese and wild swan. It’s quite possible I’ll never fully Q-Tip the hooting of honking geese from my eardrums. All day long you could sit on the back patio of the ranch house and watch waterfowl of some variety. With a long season and liberal bag limits, this region of Montana is a sportsman’s dream. 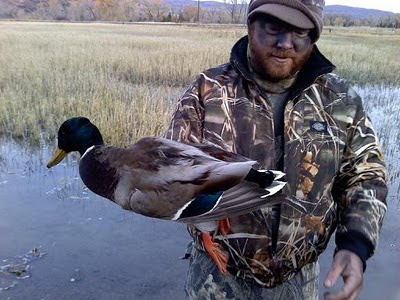 I am but a casual waterfowler. I’d never hunted ducks outside of FL or GA. I’ve killed more mottleds than mallards and found these wild greenheads strikingly beautiful when compared to the tamed ones so problematic to the aforementioned mottled ducks of the Sunshine State. It’s somewhat embarrassing to report that despite the amount of waterfowl we spied, we killed only a dozen or so greenheads. It’s the Beast of Hunting.

One, this place is impossibly open. Even the far expanses of Okeechobee marsh feel tight. We huddled in cut-out septic tanks buried in dug, shallow ponds. Those of us without waders were pushed with gear in a canoe to the hide-outs. Some service, I say...and said multiple times to the boys ferrying us. But anyway, you could see ducks and geese a long ways off. Having them choose this one particular drop of water amongst the reaches of the river and similar honey-holes on un-hunted land is a challenge that’s being addressed according to the ranch’s agenda.

Next, the weather was unseasonably warm for late October. The mornings were no colder than 40 degrees. Ranch Manager Ron said the migratory birds simply had not winged down yet. The ones that were there were residential ducks. 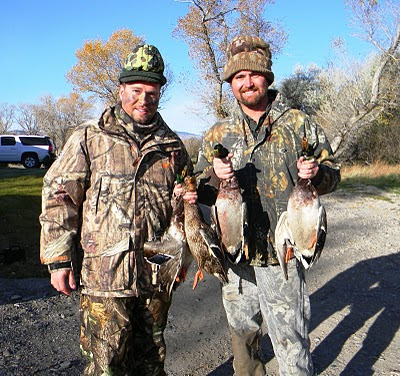 Which brings us to our third difficulty. A party the week before had put a solid hammer on what local birds lit on the property. They evidently had a fine shoot. The ducks that circled us did so with the careful, detail-oriented eyes of a jeweler.

I wanted a mallard for the wall; however, when pairs and trios come within gun range, the Five-Gun salvo made it awfully difficult to claim birds – probably hard for the Taxidermy Man to repair, too.

I especially craved a honker for the wall. I’d never hunted geese. It is its own challenge. One morning a flock flew over that we skyblasted at, but armed with 2’s we might as well be slinging rock salt at them. They would land in a pivot field of cut wheat and feed in groups of a hundred or more. We simply did not have the gear for this routine. I am pumped for the next crack at that.

Still, we made the most of it and hunted hard. Duck blinds are places for friends, anyhow. One of the two drakes mentioned at the beginning flew past Clark at butterfly-net distance. He failed to dump the quacker, something that was not easily dismissed. I missed my opportunity on one greenhead, getting the barrel of my BPS caught in the blind material on my right. Watching these big ducks cup and drop towards the decoys is a matchless experience.

Hopefully, I’ll be able to return one day. It’s truly beautiful country that is beyond writing, especially for an amateur wordsmith. The game is astonishing. Mule deer fed along the foothills. The long-tailed, Ring-Necked Pheasant cackled in the early morning and pitched between patches of deep grass. Coyotes howled in the coulees. Up the road on a private ranch, a green alfalfa field was literally swarming with pronghorn and mule deer. In the cottonwoods near the river, a herd of whitetails fed under the trees, a couple of the bucks bigger than anything I’ll catch up with in Florida anytime soon. Hell, even the black and white magpies impressed me. It’s a great place for the heart.

I’m a big game hunter, first and foremost. I long to travel many, many places in pursuit of this passion. The waterfowl of the Big Sky State now have me just as hooked. 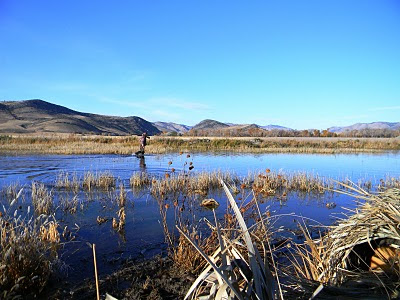 Great write-up, Ian! I hear the west is loaded with ducks, and I never get a chance to get out there. And damn that's a big mallard in that pic! Looks like a great time in a great place. I'm envious.

Thanks Casey. It is truly a place to behold, especially for a Southerner like me!