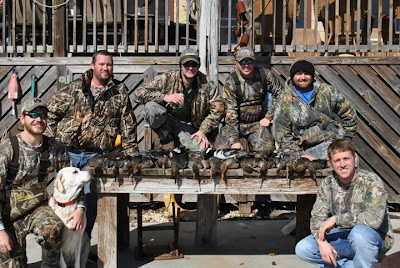 I pity those who have never intentionally hunted mergansers.

The omens were all there for a spectacular weekend of shooting. The wildlife was alive. When we arrived at the river, dolphins were chasing mullet near the dock and through the manatees that fed on floating seaweed. A flock of bluebills milled around in the channel, diving for mussels or something. A flock of wood ducks flew in right before dark.

I sensed a great victory for my team and let everyone know so.

Alas, the 2011 Sea Duck Tournament ended early. Cole, PJ, and Rumph smoked the field with an impressive 15-Duck Display Saturday morning. They didn’t even bother to hunt Sunday. Sawyer and Mitch pulled 1 Saturday and 5 Sunday, not bad for their first event. Travis, Chase and I – the alleged pros of the tourney - splashed one red-breasted merganser late Saturday morning and slept through the 20 degree cold of Sunday, content with humiliating defeat and warm beds. 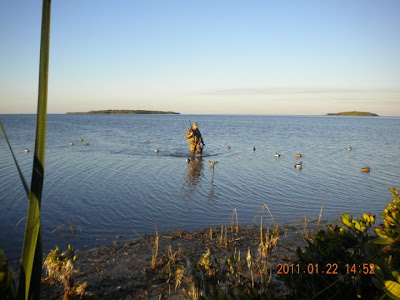 We hunted the outer islands around St. Martin’s Key off the mouth of the Little Homosassa River. Cole’s and Sawyer’s teams reported the mergies decoyed rather well, unusual for them. Using a mixture of bluebill and puddle duck dekes, combined with a floating bluebill MOJO decoy, Cole said 90% of the ducks they shot had their feet down to land in their spread. Sawyer commented a similar response. 100% of our ducks did – but again, we only shot one.

My team messed up. I had been doing quite a bit of research over the last year about hunting divers. Our decoys were in such shallow water, they practically perched on oyster clumps. Cole and Sawyer hunted deeper water. The theory in the literature and observing their success and remembering my own history with the sport, the divers like to be in water where they can...get ready for it...dive! But Travis had seen a pile of ducks in this spot the night before.

Some of it's strategy; with the tides and vastness of open water, some of it’s a crapshoot, and I was but a lowly deckhand on T's vessel. 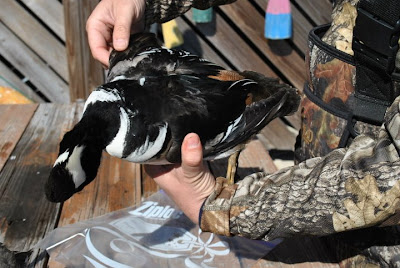 PJ popped a trophy hooded merganser that is on its way to the taxidermist. Sawyer – a duck hunting novice – is already discussing what waders and decoys to buy. Another victim of the Duck Hunting Disease.

You want to know about the merganser I shot? Well, OK. After all, it’s not always a numbers game. They can have their silly victory. For me, it’s about trophy hunting these magnificent mergansers. I look for The One that fits the description of a perfect hunt.

Facing the hurricane force gales, and gazing beyond the circling of bull shark fins, I spotted one lone merganser flying in the distance. More like, he was jet-screaming in the distance. Though he didn’t touch water, he still pushed a wake. I contemplated on how to get his attention.

Through my vast knowledge of interspecies waterfowl communication, I knew he wouldn’t respond to a mallard chuckle. Thinking quickly, I pulled a shotgun shell from my bandolier and pried it open with my teeth. I tossed the steel number 2’s high and out into the decoys. The plunking pellets sounded like a school of piddling pilchards, a merganser treat.

The wise old bird changed his course and approached the spread. As he was about to land, those wings - those backpedaling, pterodactyl wings - blew the MOJO into the brine and sprayed a fine salt mist into my face, like the lashing of water from an airboat engine. Wiping my eyes with my right hand and firing from my left shoulder, the mighty bird was felled. I waded quietly through the bull sharks and retrieved my prize. 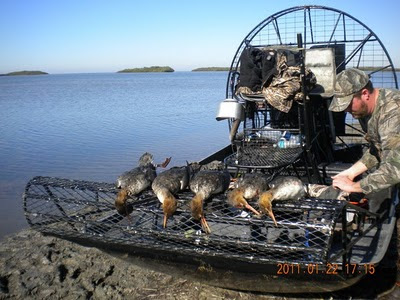 One day the rest of those guys will learn a thing or two from me. Until then, they’ll have to just be content with high-volume shooting and a year’s worth of bragging rights.

I have you props. Had I lost, I would've behaved as I did when DU reigned victorious at Whitetailopoly. Lame.
Anyways, sorry you guys lost but the pictures are beautiful and that merganser is beautiful.
Duck season ends here on Saturday- what am I going to do till next season?!?

Sounds like a good time, even though you took a whipping!

Trey - it's always a fun time. Beautiful place to hunt