I went to Lakeland Highlands Scrub Preserve in search of deer sign. For fifteen years my folks have lived on the northern fence line of the property and I’ve long dreamed of giant antlered deer running through the horse pasture. We’ve had visits from wild hogs, a couple of which met their demise, but never deer. 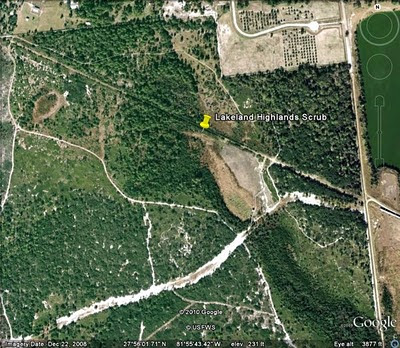 When I was a teenager, and before it had been bought by the county, I wandered this land with permission, popping quail and rabbits and whatever other small game crossed the war path of my trusty Benjamin Pump. The old railroad bed was a haven for such quarry, along with gopher tortoises whose burrows pockmarked the trail of quartz rock and prickly pear. At the back of the property, a marathon barefoot hike from the house, was a marsh where the most exotic of game lived – ducks and snipe. Though I certainly schemed and tried, all escaped the .177 pellet.

It had been a decade since I set foot on this property though the park has been opened for several years now. According to the kiosk at the entrance, deer were amongst the mammals listed in the park, along with boar, fox, raccoons, and other small game. My hopes were certainly high to find some split hoof tracks in the sugar sand, perhaps a scrub oak rubbed raw back in the fall.

They say you can never go home, and in this instance, they were correct. Little was as I remembered. The marsh, bone dry from drought, now sports a boardwalk across it, where looking down, one can see empty bottles and other litter, not the turtles and gators and mottled ducks of my youth. The railroad bed has been stripped of its rails, spikes, ties and the imaginations and industries of a generation past. The once plentiful quail that ping-ponged between the palmetto hedges have flushed for good; there’s no way they can live in this terrain in need of a good burn to unclog the overgrown myrtles and fennels and sedges.

The bobwhite situation truly concerns me. It’s possible my recollections are grander than the realities, but there was a time before Eaglebrook Golf Course, before the surrounding suburbia, when coveys of quail on this property numbered in the dozens; I didn’t kill them all. The cattle kept the vegetation beat down, creating the edge habitat so vital to the quail’s survival. Occasionally, the old cowboys would take a match to the land, burning up the undergrowth, inspiring fresh life and food from the ashes. The quail thrived. 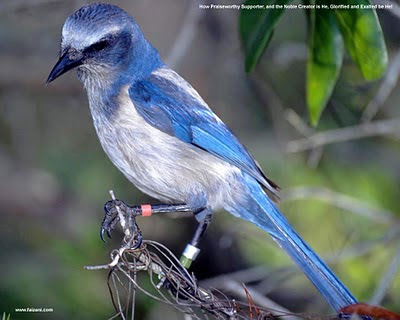 The land managers today are more concerned with the plight of the Scrub Jay which requires a niche habitat for their survival. In all my years of traipsing this land, I never saw one scrub jay. Yet, on this day, there was that bird’s picture on the kiosk with nary a mention of Mr. Bob White. Why the scrub jay merits more concern over its management and protection than the quail is for larger minds and morals than mine.

Carolyn seemed to be enjoying the hike. I guess it’s my own fault to come here with expectations and memories; few non-hunters understand the impact land, even land that does not belong to them, has on a hunter. And once that person is forced to leave the land, few times do they have the chance to return. Perhaps inside the brain of a hunter is the only place where earth remains unchanged.

Detaching from emotion, I did notice something else about this place, something that does make me happy. The trails seemed well-traveled, and if you can look beyond the occasional cracker wrapper, this is a great thing. Increasing land use introduces more people to the outdoors. Parents can bring their children to explore the beauty of the natural world. Amateur naturalists and photographers have a milieu for their hobbies. And one of my own underhanded goals was to gauge the hog population to see if I could petition a hunt of some kind in the future - not a whole lot of sign, save a few old rootings in the old railroad bed.

Wild areas are much easier to protect from encroaching civilization if a larger number of people experience its value. Hunters and anglers do a great deal of the work, but suffer from a lack in numbers. Recruiting others to enjoy nature sometimes leads to conflicts in how the land is utilized, but in the end works wonders in protecting it from concrete, fantastic news to both scrub jays and bobwhite. Lakeland Highlands Scrub Preserve will probably never be developed unless some misguided county manager strikes a deal with the devil, or there’s no one left to care about the land.

Having circled the property on our hike, we arrived back at the boardwalk. Confused by all the change and time away, I didn’t realize my marsh was now the one with this deck running through it. To make sure, we crossed it one last time to look for a dug cattle pond and the pile of dirt on which we once played King of the Mountain.

The water in the pond had run dry and the dirt mound wasn’t so much a mountain anymore, but it was there, though it’d be difficult to play any games with the pine trees growing up through the middle of it now. For a moment I recalled jumping snipe along the water’s edge, in feeble hopes of watching them drop back down so I could sneak up on them for shot. And the cows feeding on the water grasses, lifting their head to observe me in this foolishness.

And I remembered looking for deer sign, some split hoof tracks in the sugar sand, perhaps a scrub oak rubbed raw back in the fall, and how I’ve long dreamed of giant antlered deer running through the horse pasture. Of all the people who have or who will visit here, I’m selfishly pleased I’m the only one who has been able to take these memories with them.
Posted by Ian Nance at 1/16/2011 09:54:00 AM

Great story and some great memories!

Awesome read! Being a Native and hunter myself, I have felt your pain many times. My fathers' father was a Seminole Indian. Likely his mother was also. She was an orphan and we have no knowledge of her pedigree. Many of the places that I hunted as a small boy are no longer available. It saddens me greatly that there may come a day when, unless you are very wealthy, land to hunt will disappear. Let's hope not. Thanks for the story.
Hunt Safe