Hunters are no more immune from stereotyping than any other group of humans. Say a newcomer strolls into camp toting an AR-Style firearm. What do a lot of hunters think?

Switch that rig out with the newest, fastest magnum chambering?

And a lever action of any kind?

Now, I may join in and hate hoot the first two groups - though I hunt with each style of weapon regularly - but I’ll take umbrage with those who consider the lever actions to be any sort of novice toy.

My first run-in with a lever action was way back in the ancient days of the ‘90’s. My longtime buddy Dirty J was carrying his father’s Marlin 336 .35 Remington down a limestone road in Manatee County when an old sow came be-bopping across the trail. Dirty tossed up the .35 and rolled the hog in an instant.

Several years later, I stood over a 170 lb mottled boar I popped with a Winchester 94 in the classic .30-30. As Dad and I re-lived the details of the stalk and shot, a black 120-pound boar crept out of a palmetto head. I deftly raised the rifle and lowered the boom, astonished this hog would stick his snout out in the commotion, yet proud as can be that Pops was there to witness it.

Since then, Dad bought a Marlin 1894 .44 Mag. which he’s enjoyed. A few years back I answered a classified ad in the paper and, more or less, stole a Marlin Guide Gun in .45-70 topped with a 1.5-4.5X Nikon Monarch, the cat’s meow in lever actions in my humble opinion.

(Note that I’m leaving out, solely for the purpose of this discussion, such fine lever actions such as the Ruger 96/44, Browning BLR, Savage Model 99, amongst a few others. What I’m really talking about are your cowboy guns. My reasons? I simply, sadly, have no experience with these. I do hope to change this.)

When I show up to camp with these guns, I am often met with the mocking statements I mentioned above, especially when those in the know realize I have much more capable and fashionable firearms in the locker. And it’s here where I’m lost trying to decide whether I’m defending these lever actions or campaigning for them. Mostly, I enjoy a little variety and debate.

Let’s start with what these guns are not. Plainly, the range limitation of the common lever action is a buzz kill. Even with a scope, your furthest responsible shot shouldn’t be much beyond 130, 140 yards. For some hunters, such a compromise in reach is unacceptable. And in truth, depending on where you hunt, this is a real consideration. Florida and much of the South is land of mixed terrain. Yes, we have the thick swamps and scrubs, but there are plenty of acres of broken pasture, prairie, and crop fields in which game is known to thrive and a lever action is out of its element.

Next, lever actions aren’t the most accurate. Start with the blunt-nosed, lead exposed bullets - they don’t scream “High Ballistic Co-efficiency” like Ballistic Tips and other spire points. Though they now have soft polymer tips for use in tubular magazines, the anatomy of the rifle is still not designed for MOA groups. These guns are made for portability - the shorter barrels, for example. You simply won’t harness the ballistic potential of any round fired out of an 18-inch tube. Couple these stumpy guns with iron sights, and precision is sacrificed. Scopes help, but even Swarovski glass is not going to improve the natural flaws of design.

As a result, there’s a stigma on how this accuracy prints on paper. Hunters equipped with a bolt action of some variety will dismissingly scoff at 3 ½ inch groups, though few really understand how accurate their own rifle and load may or may not be. A great many campfire storyteller would be humbled if their alleged sub-MOA rifles were truly put to the test. With an audience, wind, bad rests, drops in atmospheric pressure, and solar flares have all been blamed to explain why today their pet is punching 2-inch groups when just a few weeks ago a quarter covered three shots. Personal mythology aside, accuracy, as it is applied in the field and into the shoulder of a deer, is terribly over-rated.

But if we really want to talk about mythology and being over-rated, let’s discuss the lever action’s moniker of being a “brush gun”. I listened patiently to a guy in camp a few years back bragging on how his .444 Marlin would freight train through any tangle. Finally I asked him how many deer or hogs he’d shot in such conditions. He claimed none. His argument became even less persuasive after watching him miss a doe at 30 yards standing in the wide-open. The point is, a .444 will foul off a twig or anything else. Too many tests have been done to argue otherwise, but this has always been a fun source of pride and folklore for plenty of lever action enthusiasts.

The brush gun title really comes in the design of the firearm itself. These guns shine like diamonds in those dark swamps and scrubs. They are handy to carry and handle through the vines and overhanging branches. Those short barrels with open sights or low-power scopes pick up the target in a hurry. Lug a lever action with you once, and you’ll quickly discover the advantages both in portability and ease of operation. 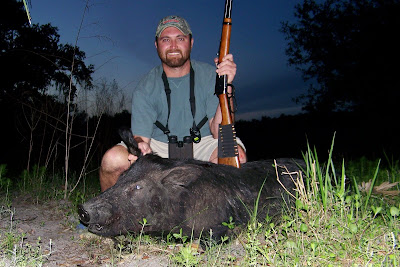 And when you fair-punch your game, woooo-weeee, does that bullet deliver a smack-down. That slow, chugging bullet hits like a ton of bricks. The energy transfer from those blunt-nosed projectiles seems very real. Not a whole lot is left to scream across the countryside after passing through the off-shoulder which can be the case with the magnums. To date, I’ve never seen a hog or deer get his or her feet back under them after a clean shot with one of these rounds. I can’t say the same about my .300 Winchester Magnum.

So, what do we have in these lever actions? A novelty? A specialty tool?

Some of both. In swamps, oak hammocks, pine stands and other areas where you don’t have a shot much farther than 100 yards, lever actions should be in your wheelhouse, particularly if you still hunt.

Lever actions may not be ideal for your style of hunting. Still, it’s never a bad idea to keep one handy. They are slick handling, fast on the target, and all around fun to shoot. And you may think about holding your tongue next time someone rolls into camp with such a rifle.

Great post and I agree. I killed several deer in my younger years with my Marlin .30-30. Still have that gun!

Three things I intend to get:

These are truly fine firearms. But, I think that you are selling them short on their accuracy potential. I can consistently shoot 3" groups at 100 yds. from the bench with most of my levers. These are all equipped with receiver sights. Milk jugs, off hand at 100, no problem. Most of my practice is off hand. Do your self a favor and go to a Cowboy Action Shoot. It will change the way you think about lever action rifles.