As you might assume, just about any centerfire will lay a gobbler low. But if you want actual turkey breast to cook at home, you have to ease up on the velocity. I’ve seen things. Unpleasant things others have done to toms with a .270, .223, .300 Win Mag. Well, the last one was me.

In Florida and a handful of other states, it is legal to hunt gobblers with a rifle in Spring and Fall, at least on private lands, so let’s not even quibble with the ethics or sportsmanship of it. If some people want to, it’s legal. Not my preference, but I think the concept of a specialized turkey rifle is neat – if nothing else, it gives you something to analyze in terms of how ballistics and bullet performance affects game-shot animals.

I have shot 4 toms with a rifle, 3 in the fall, including my biggest Osceola with the .300. I don’t regret it – it was a spot-and-stalk deal, and I plugged him at 50 yards. The other two were taken with a .25-06 at a pretty good range. The birds were salvageable for the frying pan but the rounds were overkill. The final tom I shot with a Marlin .22 Mag. I had loaned my only shotgun at the time to a buddy whose gun had malfunctioned. The .22 round slapped that turkey in the wrong spot, and he flew away, never to be seen again.

For our project today, I want to focus on building the perfect turkey rifle – a firearm you can employ on a standard turkey hunt and come home with more than the thighs and a wing left but will still cleanly drop the bird. The autumn targets of opportunity or sniping strutting field toms aren’t our concern for this discussion. Once these variables are in place, you quickly realize that it may be as sporting as toting a shotgun, though far-less appreciated.

Let’s look at the velocity angle first. If you ever get the chance, go out one day and shoot water-filled jugs – or a watermelon – with a .223. Then shoot one with a .45-70. The effect with the smaller, lighter round is appreciably different. The bottles tend to violently explode. The slower, heavier round is less pronounced. This would be true all the way up through the .300 Mags and beyond. It’s not a perfect comparison to a turkey, but not far off, either.

The sticky wicket is bullet construction. A hollow point or ballistic tip out of the .223 is likely to exaggerate the damage – not as much with the .45-70. You could shoot turkeys with the military-style full-metal jacket loads and probably get away without mangling your trophy, but I’m still weary. My dad killed a gobbler with one, and there was plenty of damage and hematoma in the meat.

What I go back to are those plodding rounds with a semi-wadcutter projectile. The old 38-55’s – which rounds like that, back in the day, made turkey right scarce – or lever action .357’s or .44 mags are about in the ball park. Modest velocity in handy, lightweight rifles perfect for toting in the Spring.

Prior to me winging that one gobbler with the .22 Mag, I had read an article from a Texas hunter who claimed it was a suitable round. Which, with proper shot placement, he is correct. I guided a hunter one year who borrowed the same Marlin. He carefully shot a jake that ran 60 yards before collapsing, just like any deer would. But I’m a .22 Mag bigot after my experience and want more bullet than that. I’m sure more than one has been laid-low with other rimfires, but that is teetering on the lines of responsibility, for me.

So when I first started this concept, I really looked hard at the .357. I used to reload all my ammunition and know there’s a wide variety of bullets available to the handloader. I’d load 158-grain wadcutters that would poke clean holes through hogs with minimal damage. Though I was shooting them from my Dan Wesson, I knew Henry Arms, amongst others, offered slick lever actions that would be suitable for turkey hunting.

But then as I was browsing through my old handloading notes, I came across a load I developed way back when. The .308 I shot at the time was tough on my young shoulders. Still, I needed to shoot. I came across some advice about this. Develop a low-velocity round using 110-gr. full-metal jacket bullet designed for the .30 Carbine. They turned out to be pleasant on the shoulder, surprisingly accurate, and, as a bonus to a young man who believed in infinite possibilities afield, the perfect fodder during the fall in case a gobbler strolled by the deer stand. This, of course, ignored the practical realities and noise of ejecting a deer round, digging though pockets and chambering one of these bad boys, but still, young hunters will be young hunters. 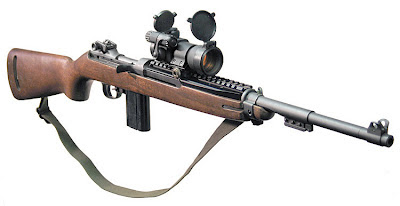 No gobbler ever gave me a chance, but this is where my search for the perfect turkey rifle ends: the M-1 carbine. Lightweight, turkey-accurate, simple firearm that shoots a round with a mouse-modest 1900fps velocity and solid bullets that’ll poke through any tom strutting the woods today. I have one in the locker already, complete with scope mounts. I suppose I could replace the original wood with a synthetic stock. It's ballistics make it, at most, a 50-yard rig which – let’s just face it – is the ultimate goal of most shotgun manufacturers these days.

I dunno. It’s a fun concept for me to think about. I doubt my turkey rifle will hit the woods anytime soon. It’s generally frowned upon on any private lands I’ll hunt this year, and rifles have been eliminated from Florida’s WMA’s for safety reasons, and rightfully so.

One day, maybe I’ll have my own piece of dirt again when I can carry out this experiment. That Carbine has been doing nothing in the safe anyway.
Posted by Ian Nance at 3/08/2012 04:27:00 PM

An awesome read, you've got me thinking on this. I'd consider a non-toxic bullet that would hold rather than shred. Maybe an 80 grain .243 or .257 Roberts?

Yeah, you definitely want a solid or controlled expansion bullet. The 6 millimeters are good, but the .243 still has a lot of velocity. You'd have to handload a special load.

I don't know about buckshot. It'd tear things up.

I should think that a hard cast .25-20 or .32-20 at 1400 to 1500 might serve as well. Sold my M1 carbine a few months back, and kinda now wish I'd stumbled upon this site earlier. Anyway, I am in Florida and do have 29 acres of turkey infested private woods just 3 minutes north of Sebastan. I will bookmark this page and get back to you come the fall to let you know the results.

Please do, Steve. Think those rounds would be perfect! Some great hunting out that way. Love Sebastian area

This past weekend in fact, I was doing a bit of experimenting. A bud and I are working on a .30-30 turkey load. We found that by taking a 115 gr. Lyman bullet meant for the .32-20 and loading it ahead of 6 grs. of Unique, we have a do-everything rifle. Out of a 16.25" Winchester M94 Trapper we were getting 1365 fps. A 20" Marlin netted another 40 fps. Both wear old steel Redfield receiver sights. Seems a one gun man, with his levergun mounted on pegs above the back kitchen door, would not be in too bad of shape.

Yes this area, known as Micco, is "out there", yet only minutes from Walmart, Home Depot and Publix. I love it!

The .17 WSM with either the 20 or 25 grain ballistic tip would make a fine turkey round at ranges under 100yds. Flat shooting bullet, sufficient knockdown power and inexpensive. Can also handle coyotes that might happen to stray in upon your yelps and clucks!

Probably would do just fine. From a rest you could most likely stretch to 125 yrs.

Where abouts are you?