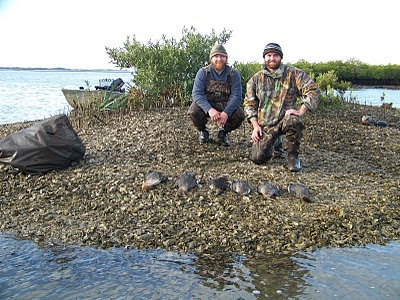 After a year hiatus, the Sea Duck Tournament resumes this weekend. A taste of 2009's event. Posted February 2009.

That old maxim, “don’t count your chickens before they hatch,” is as true for ducks as poultry. After morning one, our team was up six birds to none – a commanding lead - in the 2nd Annual Sea Duck tournament. Obviously with a name like that, this is no sanctioned, sponsored event, rather a group of friends who turned an end of the season Homosassa River duck hunt into a yearly competition for winning or losing twenty bucks.

The rules are simple - one point per duck taken while hunting over decoys or in a blind only, agreed upon to discourage other nefarious, and often illegal, manners of cheating, that none of us would ever consider doing unless being thoroughly embarrassed at the time.

Though I’ve never been paid, my team won the previous year, and after Saturday morning, a repeat title seemed inevitable. Hmm, probably shouldn’t have talked so much trash.

We hunt mergansers - red-breasted and hooded - although from time to time vague recounts detailing flocks of pintail, oldsquaw, and harlequin ducks creep into otherwise civil, honest hunting discussions. Granted, the ol’ mergies don’t attract much love from the waterfowl faithful; they don’t decoy well or respond to calls worth a hoot, are not the highest of table fare, and are uglier than butt. However, they are plentiful, with large flocks swarming from the open waters of the Gulf into the river shortly after daybreak. Even without employing any of the above common duck hunting tactics, the sheer volume of birds is enough to expect an exciting morning.

None the less, successfully filling your bag limit of five is a crap shoot; there’s an awful lot of water for fowl to travel and feed, not to mention places for hunters to set up. Pinpointing a reliable ambush is daunting. Adding to this degree of difficulty is the nature of these waters. Oyster bars jut far out of the seas on a winter low, but hide frighteningly shallow during the highs – in short, it’s treacherous navigation, and there are just some areas you can’t go with a standard outboard. 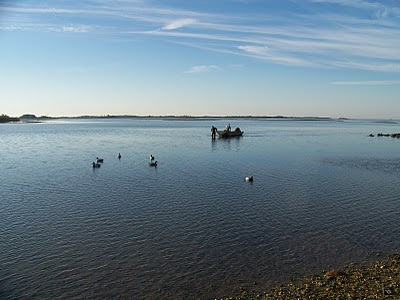 The targets themselves are tougher than old shoes, especially the red-breasted species that breeds farther north and winters farther south than the other American mergansers. This translates into some serious muscle and very thick down to poke through, asking a lot from wimpy steel loads. A number of birds will brush off a volley of long distance shots and keep on trucking, no worse for the wear, and still more well-hit birds will tumble to the water requiring a quick follow-up shot, or a long slog through the flats to chase them down, which more often than not results in them paddling or flying away. They just aren’t impressed with cheap steel.

So, we’d done well putting six on Merganser Mound, the non-descript oyster shell island where we’d set up shop. We’d tossed out four bags of fakes, bluebills mostly, and a Baby Mojo mallard hen hoping the flashing white wings - which do mimic those of a ganzer scooting off the water - would bring a few into close range. (I do realize that four bags of dekes are but a pittance in comparison to the numbers serious open water duck hunters incorporate in their spreads.)

This approach failed. The birds did not decoy; luckily though, we’d tapped into a diver duck superflyway of sorts. Soon after first light, a low-flying, high-speed flock of hoodies whizzed by without a trigger pull. Alerted, we were ready for the next group. After an hour and a half, after the smoke cleared, the hulls quit ejecting, and the echoing of shotgun blasts ceased freight-training across the Nature Coast, five red-breasted and one hoodie hen rested on the oysters.

We’d heard the other team shoot and only assumed they’d matched our production. Personally, I was disappointed. There were some shooters on that other team, and when you have the number of birds in range like we’d had that morning, six ducks didn’t seem like a whole lot.

Didn’t seem like a whole lot until we returned to the dock and discovered they’d laid a goose egg. All their shots were too far for a reasonable chance at a kill. And a bunch of other excuses. For a while I thought it was a gag. Maybe they’d wait til later to fess up and open a cooler, hoping to embarrass us in the midst of our victorious war whooping. With these boys you never can tell. But no, nothing, nada.

And it’s true, there maaayyyyyy have been a little too much strut in our step after this, doling out professional advice and insults. Too much glide in our stride as we hunted and got skunked ourselves that afternoon in this charming, mucky place I call Misery Pit, joking about smoking those other guys in the morning. Too much bounce in our pounce (OK, these are getting lame) that evening offering to let the other team hunt with us by Merganser Mound instead of whatever crappy location they’d discovered, no matter that they’d closed their deficit to four after bringing in two birds.

As Sunday morning unfolded, we clearly heard our lead, and our chances at a repeat title, evaporate. The ducks, so plentiful the morning before, simply changed course on us. We watched them spill into the Little River, veering far past Merganser Mound, right to the other team. Our few opportunities at saving this tourney flew on the fringes of in-range, safe from the steel. The Hunting Gods simply won’t allow boasting, even in an event this crude.

Rounding up the decoys, some variation of the Kubler-Ross Five Stages of Grief set in.

Denial: “There’s no way THOSE guys killed too many birds; we may still win”

Anger: “I bet that rattling Mojo spooked the ducks away”

Bargaining: “Let’s just give it a little longer, don’t unload the shotguns yet”

Depression: “I can’t believe we’re gonna have this rubbed in our faces for the next year”

Acceptance: “Oh well, I think there’s some bourbon left at the house”

Actually, that last one may be part Depression as well. The final score, 9-6. 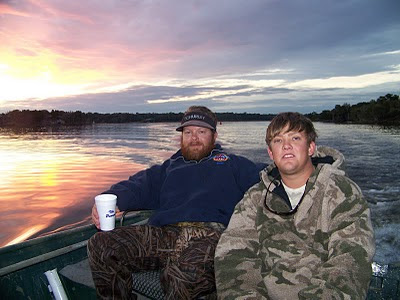 Not the end to duck season I’d hoped, but as always, a fun company and good times.

Yeah, it's a neat hunt up there. The flats wake up as the ducks start flying. Have had dolphin swim by the decoys, redfish, sheepshead and small shark, and just tons of wintering water birds. Fun times.

Be nice to the mergansers! I agree, they're terrible fare but they're not butt-ugly! They have mothers that love them! Besides, I happen to think they are nifty with their little hooded Mohawks.

Anyways, a cool hunt all-around. I'd kill to enter some sort of tourney. Better luck this year!

Yeah, the hoodies are handsome ducks...it was unfair to lump them all in....and I know what it's like having a face only a mother can love....