I know what I was thankful for Thursday morning – no one was videotaping our shoot. The first four ducks – a pair of ringnecks and a pair of bluewing teal – splashed in proper fashion. After that it got a little dicey.

Actually, it got dicey for Travis earlier. He pulled up on the aforementioned teal and realized he didn’t have a round in the chamber. I collected the double. That was my last speck of professionalism for a while. A wood duck – and I’d like to say he “dodged,” but that wouldn’t be accurate – escaped a three-round salvo from the Browning 3 ½. A mottled duck lazily floated by without even a click of the safety. Can’t explain that one. And numerous ringers passed right on by no rougher for the wear. 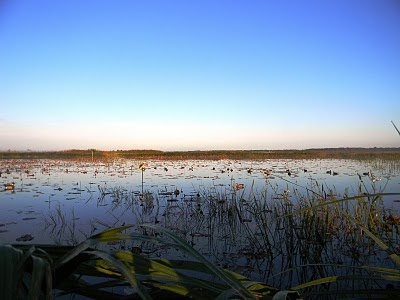 I’d peeled through ¾ of a box of Black Clouds in less than 30 minutes. For four ducks. (Head shaking)

Blaming the choke, I swapped out to a full to tag the higher flying ringers. This didn’t matter in the least. I went to switch again when a pair rushed in from the east. I managed to dump one on one shot and felt the sweet kiss of vindication, if only for a moment.

Travis and I were hunting Lake Toho in Central Florida Thanksgiving morning. This is a popular public water duck destination. Fortunately it wasn’t’ too crowded. I guess other hunters wanted to wake up and spend time with family or something. We did have to wave off one boat who thought he was going to set up on our decoy spread, I guess. We suggested he move one bay down. I’m not sure what those guys were shooting, but it sounded like they were lighting off quarter sticks back there.

We planted a Baby Mojo in the ground and surrounded it with a variety of decoys that represented the waterfowl in the area. In the open water we tossed a couple dozen ringer decoys. Closer to the weeds we threw out 5 or 6 wood ducks, four mallards hens, and a smattering of teal. It looked real good.

After pitching the dekes, Travis parked the boat amid a patch of tall lake grass. He had previously clipped palm fronds, and we lined the gunnels of the boat with the broad, waxy fans for concealment, a pretty common tactic in these parts. We called it quits around 9:30 when the action finally slackened.

It worked well. I’m proud to say every duck we did bag decoyed to our spread. Our limitations were strictly bound to pass shooting efforts. In all, we ended up with 9 ducks, not too shabby. 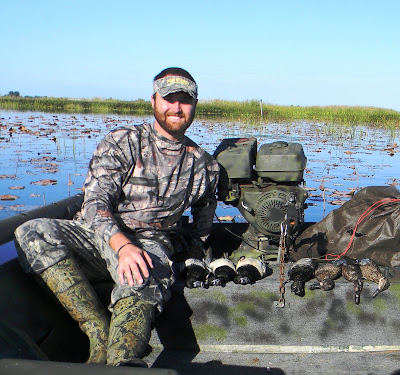 The duck hunting has been fairly slow, from what I understand. It’s been warm for this time of year. The large clouds of ringers that are typical here haven’t settled in yet. The teal are sporadic. I’m sure Opening Day took its toll on a fair number of the resident mottled and wood ducks.

It’s a pretty place, that Lake Toho, though not as remote as Okeechobee. You watch planes lift off and land on a constant basis from Orlando International. Bass fishermen whip their outboards through the channels at high rates of speed, and the din of airboats is near ceaseless. In the horizon, four or five hot air balloons floated up and away. Lots going on around Orlando.

Still with all these people, there was one lone witness to my poor outing. And he couldn’t say much either. We were the real turkeys this Thanksgiving.
Posted by Ian Nance at 11/29/2010 04:31:00 PM

Nice hunt. We got one hooded mahganzer. We had a nice group of mallards fly by but unfortunately I just stared at them as they flew by. Extremely novice move on my part. Oh well, there's always this weekend!

The hooded merg, huh? We actually have a merganser hunting tournament eah year. It's pretty immature, but fun!!

Much better than my outing! Zilch. And now the ice is starting to thicken. This looks like it will be my worst year in a long time. One week to go and work is in the way...

Sounds like my deer season. One thing or another pops up and keeps me from going. Duck has been good, though