My duck season is over.

OK, it really is. I’m stuck in stupid work trainings all week, and this weekend I am repairing to Homosassa River for R&R with non-hunting buddies. I honest to God can not drag myself out of bed before daylight one more time for a few weekends, at least.

Just can’t. Hate to admit that, but there ya go.

Hunting video games have come a long way since I was a kid – technologically, they’ve come a long way, not so much for my maturity level, sadly. No more orange pistols and trying to shoot the laughing dog in Duck Hunt. 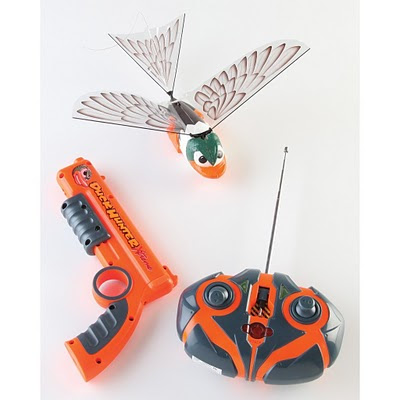 Well, there is still an orange gun involved. Carolyn bought me this crafty little device for Christmas, Duck Hunter EXTREME. It’s a two-player game where one person flies a remote-controlled duck and the other gamer tries to plunk it down with an ever-stylish orange pistol that sounds kinda like a shotgun when you pump the action and pull the trigger. Actually, if I keep shooting without hearing protection, it’s exactly what a shotgun will sound like to me in the not-to-distant future.

It’s advertised as an indoor/outdoor game. Indoors, with the wife present, it goes over about as well as blowing on a turkey or predator call. Outdoors in a clearing where it won’t hang in branches or roofs, it’s a lot of fun.

Which is exactly what Cole and I did one evening with the aid of a feral cat who wanted to pounce on the fluttering duck every time it hit the ground, and who should be thankful we live within city limits. Cole did most of the flying because when I controlled it, the duck seemed to develop a crippling case of depression and flew into powerlines and in front of passing cars.

It takes three hits to bring the duck down with the IR-Laser Gun. The first two hits, the bird pauses slightly, and the third brings him back down to earth and into the waiting claws of the aforementioned feline.

As noted, steering the duck can be tricky, but Cole figured it out. It’s not fool-proof, however. After getting it caught on the roof and in an oak tree, the game devolved into flying it through the patio to buzz the ladies who came over for a glass of wine. Needless to say, it would have done better to let the cat shred it up.

Still, it’s entertaining and props to whoever thunk it up.

I look forward to playing it again one day when Carolyn lets me have it back.

Oh got to have one Ian, you think that the OBN will but them up for us to review?
Regards,
John

Ian-
Thank you SO much for making me aware of this... DU will be so excited if I get him a set of these to play with until duck season comes around again!

OBN should be petitioned on this one!

HLYH, I strongly urge you purchase this game. It is up your avenue

I have seen these but had my doubts on wheather or not it really worked. Thanks for the review!!

I was wondering what the hell that "bug" was suppose to be....a duck? huh.

And I agree, this certainly is a game that requires beer....most games around our house requires that for some reason. This one definitely goes on the shopping list. Thanks for the review!

It works surprisingly well. Really have enjoyed it thus far!

Thanks for stopping by!