My initial three thoughts as I drove around Chassahowitzka WMA Sunday afternoon:

1. Lord, this place is thick – The eastern third of the property, Zone C – the only part you can drive a truck on – is a combination of palmetto flats, scrubs oaks and huge pine stands with choked up cypress bottoms. My eagerness for crawling through this mess in the wee morning hours is decidedly low, and I didn’t see much acreage that would rile up any enthusiasm either. The few open spots had recently been burned; in fact, it looked damn near nuked and very unturkey-ish.

2. There are a ton of people riding around here on a random Sunday – Apparently Chazz is no big secret. I’ve seen fewer vehicles on weekends on the Polk Parkway during Snow Bird Season. Most of the people were bikers with a few Git-R-Dones wheeling muddy Fords amongst the crowd. On the very south end of the South Road was a pile of clothes someone had dumped under a scrub oak. Classy.

3. Where are the animals? – Part of this answer can be described by my preceding observation. Chassahowitzka allows quite a few hunters in during general gun season. Some folks run dogs for deer, and the previous two weekends hosted hog dog seasons. At this point I’m sure most of the fuzzy creatures had developed post-traumatic stress disorder and the sound of a vehicle causes them a nervous tic as they go hole up in those impenetrable bottoms. Still, I saw very, very few fresh tracks – none of them were turkey. 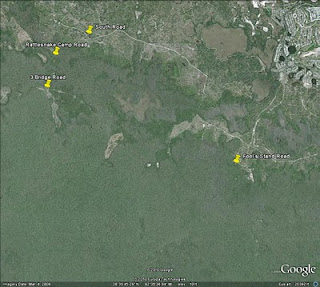 Having said these things, there is still an incredible amount of ignorance on my behalf. I only covered that third of the property that allows motorized vehicles. The western third (Zone A) is accessible only by boat or long hike. The middle third (Zone B) – the area with the majority of the game, I’d think – I need to reach by one of the numerous fire breaks, but that’s for another day.

I did notice some nice spots in Zone C. At the very least they are aesthetically pleasing. The area around Fool’s Stand Road has potential. If this were private land I’d set up where 3 Bridge Road and Rattlesnake Camp Road intersect - beautiful roost pines down in the swamps and it’s fairly open. Again if it were private, I’d set my decoys right in the middle of the road and probably do alright. 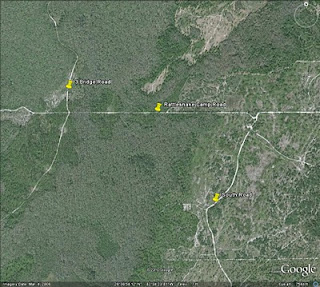 I figure ten people drew a tag for this weekend. Seven to eight will actually show. More than half have probably taken my lazy strategy of scouting, if that. So in these two spots I can probably count on at least one other hunter being close by.

What really surprised me about this land was its topography. It is downright hilly in a place I assumed would be flat as a board. In theory, you could get to some of the high points and listen for a gobbler in the morning. How you’d make a stealthy approach through all the underbrush without spooking anything is the curly Q, though.

One other thought kept haunting me after getting a sense of the land. There’s a reason only ten tags were issued for this 33,919 acres. Most of Zone C is not ideal turkey habitat. Sure, some would wander through during the day, but it is thicker woods than most turkey enjoy. These are probably Swamp Birds which really means I need to hoof it down into Zone B before my weekend arrives.

This is just a first impression, however. I got only a small feel for the land and at least a backup plan or two for when the hunt comes.

No doubt there are some gobblers around, and it’s my chance to bust one on a quota permit this year. I’m going to take advantage.