I’ve been accused of being awfully whiny this hunting season. Things just haven’t gone well thanks to one obstacle or another. Some plans were scrapped and others didn’t go to plan. But it has been pointed out to me that, yes, I’ve been able to get away with regularity, and I did kill a few deer and hogs and quail. Which is all true. I am thankful.

The ducks, though. Honestly, I didn’t spend as much time on it as I’d hoped, and offseason's bar stool plans hit the reality wall a few times. If I have to choose between deer and waterfowl, which I do, deer win every time. It’s terribly difficult to do a combo bowhunt in Pasco County with a ringneck adventure to Toho in one day.

But a few of the opportunities I did have went to pot thanks to weather and other circumstances I have no control over. Cole and I hunted Toho in early January a couple times, but it was freezing cold, the lake had been severely pressured, and the ducks stayed rafted up in the open water far from any concealable vegetation. Had a blast, learned a bit, but no shots were fired.

I enjoy – really, thoroughly enjoy – splashing sea ducks, sawbills, mergansers, whatever you want to call them off Homosassa. A couple days before New Years, Nick and I popped a few. Hunted there this last weekend and didn’t pull the trigger on any in-range birds. Did try to blast some speck of a duck out of the stratosphere Sunday morning in pure desperation. 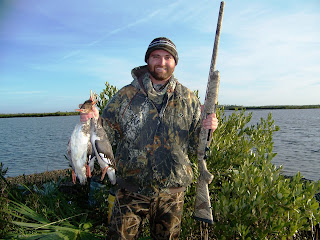 For whatever reason, there just weren’t as many birds off the Nature Coast this year. No telling how the record cold weather of a few weeks back influenced them. The full moon last weekend pulled a lot of water in on the morning high tides. And it’s rained buckets this winter. My guess is those birds that were present flew to the back bays and creeks protected by the oysters and limestone bars. In years past, there hasn’t been as much water and the ducks are forced to the open bays and accessible side creeks. So, lots of water + fewer birds = limited chances.

Oh well. I prefer to put a lid on this season with some positive thoughts.

1. I have two brand new boxes of shells for next season. With the price of ammo increasing, I’ll save some cash next year.

2. I have a new duck gun, a very stylish Browning BPS in 3 ½ magnum, that promises to be a favorite in the safe, supposing I shake the albatross-like bad luck it has inflicted on me since I acquired it. And not having pulled the trigger, my shoulder doesn’t ache from the mammoth recoil of these loads.

3. I was loaded up with new, good-looking decoys for Christmas that did a great job reeling in cormorants, egrets and sea gulls last weekend.

4. I have a cult of successful duck hunting friends who are more than happy to regale me with tales of their triumphs, and from whom I am able to hunt vicariously through.

5. I did kill the first two ducks I shot at this season, though these incidents occurred almost a month-and-a-half apart.

6. I have almost 9 ½ months before next season starts to forget this season existed.