Scouting Chassahowitzka for Spring Turkey I - The Lucky Draw 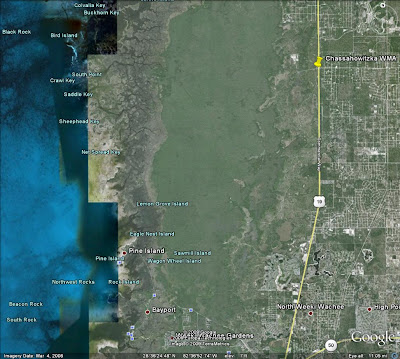 I’ve been grinning ear-to-ear like Enzyte Bob the last few weeks. I just can’t believe my luck this year. You see, I NEVER win raffles or lotteries or anything. When I attend NWTF or DU banquets, I just give my money to the Hooters Girl and tell myself, “It’s all for a good cause.”

But this year, I’ve had the hot hand! This summer I pulled my first-ever gator permit on my first try. While others on the various outdoor forums griped about the new random draw system sucking when they didn’t get drawn, I sported a smug little smile on my face. Then came the WMA quota hunt application in June - got my first choice for muzzleloader and archery (didn’t apply for any general gun). Finally, I pulled all the hunts I wanted at Duette.

November was the month for Spring Turkey quota hunts. I perused the options. I wanted hunts with limited permits that would keep hunting pressure down even though this reduced my likelihood of being drawn. Second, I wanted something accessible so I can scout and hunt without driving a million miles and back each day. Finally, I wanted some place I’d never been. This year has been about trying new things - Green Swamp and Richloam were out.

From all the properties listed in the FWC manual, my primary choice was the Babcock Ranch Preserve. I hoped to draw in the South Zone and hunt early March just in case invites to private land popped up later in the season. Plus, I could stay at my grandparents’ place in Cape Coral and commute. No dice though.

My second choice was Chassahowitzka WMA in Hernando County. 10 permits per weekend for over 33,000 acres. Long shot, but pressure should be low. Plus, I have a couple places to stay up the road in Homosassa.

I’ll save you the details of my last three choices since I drew my second. I was dealt the flush this year. I swept the tag season!

Careful what you wish for, however. I’m not unfamiliar with Hernando and Citrus counties and its mixed terrain of scrub and deep cypress swamps. This is going to be a tough hunt. One, the sheer size of Chazz makes it daunting to scout. 33,000+ acres is a lot of ground. Next, you can only drive on maybe a third of it. The back third is accessible by boat, and I don’t have the time to learn to safely navigate those waters and scout for birds. Plus, swamp gobblers themselves are a difficult quarry. I’ve not seen it in person yet, but it looks just thick enough from Google Earth that, by educated guess, I’m not sure you could hear a gobble more than 150 yards away – if they gobble much anyway. And no telling yet what the population of birds is like.

As I said, I’ve started scouting through Google Earth. I’ve also posted queries on the forums to try and drum up some help. One gentleman offered to show me around, which I’ll probably take him up on.

One last thought. Since I have a loyal readership that numbers in the single digits, I’m confident no one is reading this who’s hunted Chassahowitzka their entire lives and is dying to draw a turkey tag here and is now angry with me. Just in case, I promise I’m going to put my best effort forward to pop a bird here and not just waste a tag.

As I said, it’s going to be tough. For the record, the other permits I’ve drawn have been met with mixed success. The gator hunting ended well while Duette crushed my hopes and dreams. I missed my muzzleloading hunt to watch UF smack down FSU, Tebow’s - and as it turned out, Bobby Bowden’s - last game in the Swamp. The archery hunt is in January.

While hunters may not have much luck drawing tags each year, there’s no question Florida does open a lot of properties up for hunting. As always, I’ll keep you posted on my progress.
Posted by Ian Nance at 12/17/2009 11:03:00 AM