Thanks to Treerooster at the NWTF Forum for permitting me to re-publish this post. Just a savage reminder to pay attention in the woods.

Some will be hitting the woods in a few weeks, and I thought it's time for a safety reminder.

I think this is my 4th year posting this, and I am sure a lot of you have seen this before. But there are new hunters going out on their first season and always new board members.

In the spring of 2005, I had just finished a turkey hunt in Colorado with my friend, James, a couple days earlier. James headed to Kansas for another hunt, and I was on the road to Black Hills of South Dakota. As I drove near a cellphone tower my phone beeped. It was a message from my wife. In an emotional and broken voice she said, “Gary call me, Fred shot James.”

Below are his X-rays 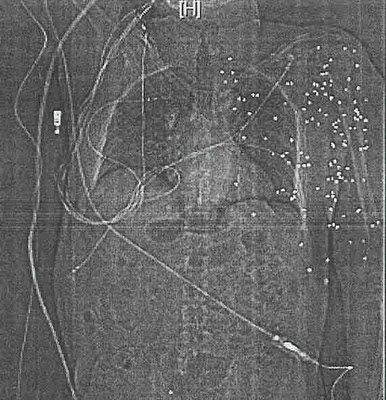 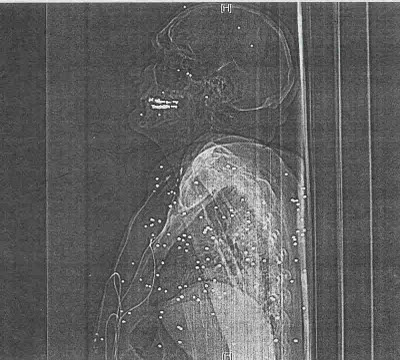 James was hit with a Remington #5 Hevi-shot from approximately 40yds (shooter's estimate). He was just getting up from a calling position and was in full camo, including face mask and gloves. He had at least 139 hits. One was within millimeters of an artery to the brain. One or two passed through his lung. Two are, to this day, lodged in his heart.

Let me get up on the soap box for a minute:

Always assume someone else could be in the woods with you, even if no one is supposed to be there.

Set up your decoy so if someone were to shoot it, the shot would not hit you. Use folds in the terrain, a tree as a block, or plenty of open ground behind the decoy.

Think about hunter orange (hat or flagging tape). Maybe while carrying your bird out, or possibly even a flag at your set-up. You don’t have to use it but at least asess the situation.

Be safe guys. Hunt defensively and be sure of your target.

That is one lucky guy! Good information for all hunters.