To the Wolves or Whatever

From Chapter 4 - "What Were They Thinking" in The Annals of Bad Ideas comes a report on AOL News that scientists are contemplating releasing wolves in National Parks and other lands to fight the expanding ungulate herds.

Quoth Forrest Gump, "Stupid is as Stupid does."

Look, I know a few things. One, allowing hunters in National Parks to control the deer and elks herds, while a fine idea that could make the park system some money, would rile up a series of lawsuits from the anti-hunters that would last at least until the next asteroid hits us. 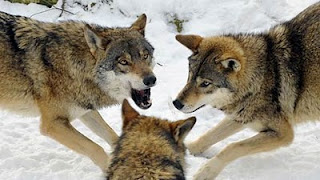 Two, yes, something probably has to be done in parks around the country to thin out deer and elk populations. Widespread starvation or disease is the absolute least tolerable option yet is a grave threat. Some form of control is needed - ahem, hunters.

Three, for the most part, wolves are done in the Lower 48. Morally right or wrong, I accept it as functionally accurate that these animals do not have a place in Modern America. The room is not available. Run-in's with people - ranchers, hikers, bikers, Boy Scouts, whoever - is inevitible. Hell, just watch the news tonight; there's probably a coyote-ate-my-pet story. I'll share my sorrow about this fact and wish it had never come to that, but as they say in the locker room after someone pulls a gun on a teammate, "it is what it is."

Perhaps the most ludicrous part of this is the thought of erecting fences, to speak nothing of tracking collars and contraception. What, are they going to fence off a population of deer, add wolves, wait 2 years until cooked through? Is this their recipe? Then tear down the fences, round up the wolves and move along?

When you make statements like the wolf has beeen gone from the lower 48 states you should check your facts.
The Gray Wolf (Timber Wolf) has been alive and eating in Minnesota for a long time.
The Gray wolf has not had to be reintroduced to Minnesota.
They are walking the streets of Ely MN and getting the occasional house pet.
They have been in Northern Itasca county since at least 1965 and before.

That's why I wrote "for the most part." Yes, I know they still exist naturally in that part of the country and elsewhere. Though not the same thing or same issue, we have small populations of red wolves in the South.

My main point, though, is the majority of their traditional range is absent wolves save for areas where they've been re-introduced, and that's not occured without controversy. Additional re-introduction is probably not the best management tool.

Thank you for highlighting your point and for reading!!

It simple really. Increase the total amount a hunter can harvest. Either by a limit increase or draw.

The introduction or reintroduction of wolves is not the answer. Already, coyotes are over populated in their ranges, and they account for more than 75% of the annual Cervidae population losses, yet the Cervidae are still being reported as over populated.

Birth control, was originally invented to increase the chances of having a pregnancy, not to stop it from happening. Their method of wanting to use birth control on the wolves is based on the same manufacturing and chemical processes that are already in use ... and medical science has proven time and time again, that when humankind tampers with genetics or cellular control or manipulation ... that NATURE will always adapt, overcome, and correct human arrogance with something even more difficult to control.

Nope ... anti gunners and anti hunters are being appeased in this one. Unfortunately, this will be another program that BACKFIRES in their faces.

Well, spoken...the trouble is gaining hunter access to some of these parts. The problem with articles like this is they stir the pot, but don't give specifics...not that I think introducing wolves anywhere is a great idea, I would like to have a better idea of the plan...but yes, I agree, Nature always adapts.

Thanks for your input!!!