Some people claim venison should NEVER be marinated. If you cook it right, they say, it won’t taste gamey and come out tender without the additional accoutrements and fancy flavors. Ironically, these same people also tend to dump their venison in a pressure cooker with carrots and onions and beef stock and cook for hours on end until the meat, in vainglory defeat, is forced to give up its remaining flavor to the stew base and disintegrate.

This is usually followed by a, “Betcha never had venison THAT tender - cuts with a fork. Most people can’t tell the difference between my deer and beef.” Essentially, they’ve gone the long way in accomplishing the very same thing one can produce with a bottle from your grocer’s aisles.

Whatever. I like a good stew as much as the next person; I like to grill more, though. And I like to switch up some flavors in my life. I unapologetically marinate a lot of my venison, the premium cuts, too.

I won’t run down the list of all the marinades I’ve used simply because I’ll need to write another post one day about this and will want fresh material. So for today’s lesson, we’ll be working with Dr. Pete’s Burgundy Wine Marinade. 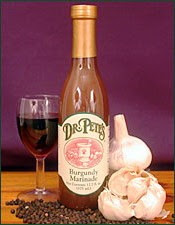 I discovered Dr. Pete’s in a little sporting goods store in Estill, SC a couple years back while on a turkey hunt. There was a decent selection of sauces available, but I’ve long wanted a respectable wine-based marinade of some variety. I’ve tried to make my own, but they always come out kinda bitter. Leave it to the Doctor, I say.

Now my prep work is the same as I do with most venison cuts: defrost, slice into steaks, hit with a tenderizer mallet, and soak in icy water for 30-45 minutes. This last step sucks a lot of the blood and any gamey taste out of the meat (does the same for fish). Then I place the steaks in the marinade and soak for six or more hours.

With grilled venison I like to cook hot and fast. This sears the meat and holds in the flavor. Get your grill up around 400 degrees and cook 1 ½ - 2 minutes a side for medium rare. I use some of the reserve from the bottle to toss with white rice. Dr. Pete’s also blends well with beef. It’s delightful.

Really, this is one of those sauces that enhances the natural flavor of venison. I think even the pickiest vension cook would enjoy it. Come to think of it, Dr. Pete's would be a fine base for a crockpot meal, if that's your cup of tea. Or soup.