If you hunt gobblers long enough, you will get busted. A sure thing becomes a bad memory. I promise there is not a turkey hunter worth his salt who has not screwed up royally over the years – and never trust one who says otherwise.

I’ll never claim perfection. I’ve ruined enough hunts with bad decisions to even make such a remark, but at least I’ve come away with a lesson learned. Here are my Top 3 Gobbler Goofs (I could run this into the double digits, but would like spare myself some embarrassment).

I’d set up on the edge of a Florida oak hammock near a roost and dry wet-weather pond where I figured the birds would fly down. Morning came and not even a cluck. It was the first time I’d hunted this spot, but had plenty of reason to believe there was a gobbler in the area – I’d seen him on an earlier trip. Still, it was late in a warm season and gobbling activity had slackened, so I should have expected a quiet morning.

Impatience grabbed me early, though. I figured I could slip out to a cow pasture on the other side of the swamp and find a tom strutting.

I walked out to retrieve my decoys. As I returned to my oak-root seat to grab the rest of my gear, the gobbler was standing behind where I had been sitting, no doubt watching me get the dekes and shaking his head at this fool in the woods before high-tailing it, as only a gobbler can. But give it credit; the bird had more patience with me than I had for him. 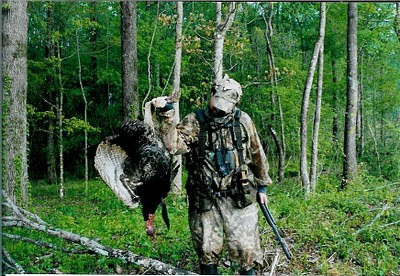 Lesson Learned – It pays to have some faith in your set-up, especially late in the spring. Boss toms have an annoying habit of sneaking in quiet anyhow, but after the pressure of the season builds, they can go completely lockjaw. If you’ve done your scouting, located a bird and can exhibit just a bit more measure of self-control than you think you are capable of, you’ll probably get your tom, although it may not be the Made-For-TV moment of strutting and gobbling you expected.

2. Getting All Up In His Grill

If you’d watched gobblers constantly walk to this one tree to feed and strut, it’d make sense to sit under said tree to nail one, right?

One would think. I did such a thing. A huge oak sat in the middle of a 40 yard break between palmettos and a swamp bottom. Over the course of a couple mornings, we watched several toms strut right up to this tree and chase hens around before petering out into the cow pastures. I’d tried intercepting them on their way from the roost and on their way to the pastures with no luck. For some reason they keyed on this tree. They cared nothing about calls or decoys, and my set-ups were always just-too-far away from my kill zone.

Well, we’ll just solve that problem! One morning, a friend and I plopped down under the tree, deployed the decoys and waited. Sure enough, soon after the first crow caw a gobbler lit up, answering my calls and everything else – I could have thrown my box call against the tree and he would have gobbled.

He hit the ground gobbling and made his way to the tree. For some reason though, he held up.

Finally, I glimpsed back to see his head poking out of the myrtles, kinda like in Jurassic Park when the velociraptor kills the game warden – he was suddenly too close for comfort and knew something was up. He slowly backed up and gobbled his way to the swamp, out of view. I tried to re-position several times, but he was having none of it.

Lesson Learned – The tom knew trouble immediately. One, we were too close to where he roosted. He probably - I use “probably” since I don’t have a great grasp on any turkey’s deep thoughts and feelings - watched up set up, get adjusted, etc. Two, he and the other birds in the area had probably been following the same ritual every morning for a month. He may have been a talkative bird, but not a stupid one. To him, something’s wrong when he heard hens clucking at the base of the tree at first light. Three, me flipping my head around surely sealed the deal. He played cautious anyhow, circling us, but that movement no doubt iced the cake.

In hindsight, I could have set up on some trees by the palmettos within in shotgun range and been fine, but I wanted him to land in my lap. That mentality ignited every red flare in that bird’s consciousness. I guess the big lesson here is not to interfere with their habits. Stay just on the edge and out of their microscope.

This incident still hurts, and it’s been 6 or 7 years by now. I’d set up in an oak hammock humbly named, “Ian’s Island.” A shallow creek separated it from the larger hammock, and I’d convinced myself it was the Promised Land.

Well, my dad hunted the big hammock, and I went to mine. After a quick sprinkle that refreshed the morning, a gobbler sounded off. Really, it bellowed – shook the raindrops off the leaves. Dad and I were at least 200 yards apart with the gobbler perched in the middle.

As luck would have it, the bird came my way, approaching from behind – seems all these stories sound the same – but separated from my ambush by the creek.

Now, we’ve all heard gobblers won’t cross fences, creeks, etc. The tom hadn’t read that. I had him gobbling and on a rope, but convinced myself he’d never cross that creek. Since I thought him to be the dominant male in the area, I pulled out my box call to gobble at him, hoping in desperation to challenge him across the water.

As it turned out, there was no need for this. I went to strike a gobble at him just as he showed up off my right shoulder. He was a big boy. And when he saw me hit the paddle and a half-gobble, half-car wreck noise wobbled out of the box, he hit the brakes and reversed course.

I tried to scoot over to get a desperation shot, but my vest has one of those fold-down seats that prevented me from standing or moving quickly. He ran straight through that creek and put it in the wind.

I shook my head all the way to the truck right up until now as I painfully recall this.

Lesson Learned – If a bird is coming to you, let him come. Don’t get too fancy. They won’t cross creeks? At least give him a chance to try. I’ve killed multiple birds that ducked under barbed wire which allegedly they won’t do either.

I swear the mortality rate of gobblers would be infinitely higher if hunters didn’t screw around so much. Call only as much needed to grab and hold his attention – if even that. I can almost guarantee a push-button call and 15 minutes worth of patience has laid more toms low than hurry and some “Screaming Eagle” metallic, marketing scheme of a call has.

Look, you will probably mess up one day. It happens. These birds are sharp which makes hunting them such an exciting challenge. Just try and avoid making them look any smarter than they already are!
Posted by Ian Nance at 2/12/2010 03:46:00 PM