Magnums, For Better or Worse

This is not something I am proud of but it happened. Hunting a Georgia clay logging road one foggy morning several Aprils ago, I dropped my biggest gobbler at 80 steps. I had my dad come confirm it. If I’d realized he was that far, I would have not lowered the boom. As it was, the wide open terrain of clear-cut combined with the fog caused me to misjudge the range. And I was a touch antsy anyway. Two mornings prior, a bounding coyote spooked an inbound gobbler, and the following morning a gobbler spooked upon seeing my jake decoy. Such things happen with turkey hunting, agreed?

Well, this tom slowly eased down the road without a gobble or strut. My H.S. Strut Lil Deuce slate was working its magic once again. And I don’t know. Call it a fear that something else would go wrong or call it just plain bad judgment, but I decided he’d crawled within acceptable range.

OK, I’m a little proud. Though this wasn’t the first tom laid low by the shotgun, this incident earned my Mossberg 835 - shooting Winchester Supreme No. 5’s in 3 ½ Magnum - a special place in my heart. Maybe I got a little cocky, though. 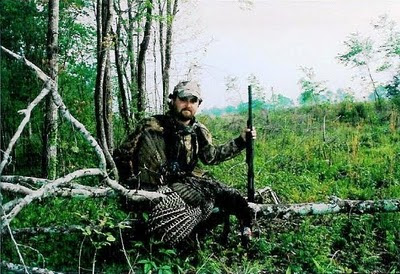 A couple years ago in Levy County, Florida, I had been calling to a bird all morning. No one had killed a gobbler on this property yet and I wanted to be the first. On the roost he gobbled at everything, and I expected him to pitch down into a little food plot to my left as I huddled under a dewy myrtle bush. Never really happens how you want. Instead, he settled in a cow pasture obscured from view by a cypress swamp and a row of palmettos.

For nearly two hours I slowly worked this bird my way. I was badly out of position and couldn’t redeploy or he’d surely peg me. My first glimpse of him was through a Frisbee-sized hole in the brush, his white head bobbing up and down with every gobble.

And there he stood, in that hole, 45 yards away, gobbling like crazy at my increasingly poor attempts at calling. All he had to do was move fifteen yards to my right and I’d have a clean shot, or maybe he’d see my dekes and come a-runnin’. I was badly unwound.

He almost made it. Through my peephole, I saw him begin to move in the favorable direction then stop, flip his wing and about-face, heading back from where he came. I just couldn’t take it anymore. When his head settled in the middle of the clearing – that ugly white head resembling a front post settled in the ghost ring of an aperture sight – I drew my fiber optic bead and squeezed the trigger. Hey, I have a 3 ½ mag. I can go Predator-era Jesse Ventura on him.

In a long career of making dumb shots on all manner of game, this was the worst. I hopped up and circled the palmettos in time to see him beat feet into the dark of the cypress.

I returned to my set-up shaking, feebly fumbling with a lighter to fire up a smoke, wholly disgusted with myself. I’m no rookie, for crying out loud. I knew better. This bird got the best of me, and through hubris only did I attempt a shot like that.

When my hunting partner arrived fifteen minutes later, I’d chiefed through half a pack and still quivered. I explained the story and showed him what I tried to shoot through. The vegetation looked like it’d been hit with a weed whacker, and I seriously doubt many, if any, pellets scooted past.

The 3 ½ magnum is a wonderful tool, but stupid it will make you if you let it. In one of my previous blogs I wrote that just because they sell guns that’ll shoot across a cow pasture doesn’t make it a good idea. Now you know where that statement comes from.

If you ask me, I will look you straight in the eye and tell you I prefer having my decoys set within 15 yards of me hoping the gobbler will correspond with plans. In the same vein of honesty, I will also assure you I will take just about any opportune shot presented.

You know how it goes. Only so many days of hunting. Chances are limited. Self-imposed pressure to perform. Both these above stories have one binding thread: getting too excited and feeling too empowered with my weapon. The magnum’s siren song sure is sweet to those lacking self-control.

I’m not here to tell you what’s right or wrong or what shot to take. By most measurements, both these shots were ethically questionable. If you don’t think ethics has anything to do with it, we could also use the words “responsible” or “practical” and maybe a few others. Luckily, neither of these birds were crippled and left to the coyotes.

I don’t like “what might have been’s.” Maybe if I’d let that Georgia gobbler get closer he would have spooked. Perhaps if I’d shown a bit more patience with the Osceola he could have slipped back around and in an unfiltered line of fire. I don’t know.

I do know I’ve learned my lesson. “No lead, no dead” is a fun campsite slogan, but in the field I’ll be taking concerted efforts to slow down, breathe and try not to make so much happen simply because I am running with the big gun.
Posted by Ian Nance at 2/25/2010 03:35:00 PM

Putting this lesson in my memory bank. Patience sounds like a key ingredient to put in the mix for (hopefully) my first gobbler.

Easier said than done! Best of luck on that first tom....you'll never forget it!!!!!!