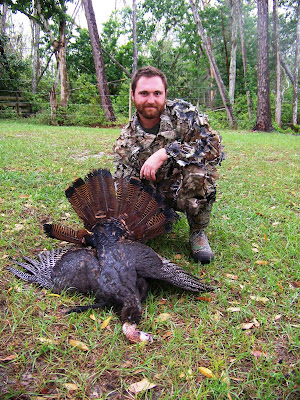 Two years ago I started my volunteer outdoor writing service through a local newspaper's public blogging site. Unfortunately, through powers beyond my control, my archives from that source are gone and lost forever. Luckily, I saved rough drafts of my work on my computer, and once or twice a week I'll re-introduce a past column back into the wild of the World Wide Web. Enjoy!

My 2008 Florida spring gobbler season ended around 10:30 Friday morning with a 20lb tom sporting a 10 inch beard and needle sharp spurs. The morning before my buddy, Nick, coaxed in the first gobbler through the wind and rain and into my shotgun spread. It sounds selfish after putting two birds in the cooler, but I’m wishing Florida would up the bag limit for the season. Two doesn’t seem like enough.

Not that I am bloodthirsty for turkey, but now my season is over, way too soon for all the planning, preparation, and anticipation.

Turkey hunting is always anti-climatic for me. The fun is truly in the chase. I’m almost disappointed it ends in a shotgun blast – almost because I do love that breast meat. On this hunt I got the best of both worlds. One gobbler was called in, and the other one died by spot-and-stalk, a terribly difficult feat with these sharp-sensed birds.

I had been invited to hunt a friend’s ranch out around Polk City. Four days of probably the best turkey hunting I’ve been a part of – and I’ve been fortunate to experience some excellent land over the years. Each green field surrounded by pines and cypress heads looked perfect for busting a gobbler. And most of them were.

Still, we worked for our birds as is usually the case with FL turkey hunting. If you remember from my last blog, Luck wanted nothing to do with me Opening Weekend, as weird weather and circumstance crippled our chances. Pre-dawn Thursday, in the wind and rain of an advancing cold front, the weather looked to sucker punch me again.

Nick and I sat in his truck listening to Bubba the Love Sponge and catching up since our last hunting or fishing excursion, waiting for something to give. The rain to stop, maybe. Perhaps daylight and a realization our morning had ended before it began. At one point, we’d geared up to enter the woods when another blast of wind, rain and lightning sent us back in the truck.

Our plans evolved by the minute as light approached, and we settled on one idea. Instead of trying to lay a decoy spread and calling, we’d sneak into an orange grove to sit and listen for any birds gobbling off the roost. The problem was, with the inclement weather, neither of us placed much confidence on the birds actually calling. Or pitching out of the trees any time before noon.

Nonetheless, the next break in the rain we climbed out of the truck, hiked a few hundred yards, and settled under an orange tree. By now it was light-thirty, and the rain kept spitting from the sky. People say nothing ventured, nothing gained, but certainly I didn’t believe it at the time.

How wrong I can be. Around 7:45 we got a gift gobble. One tom off the roost, perched by a food plot, Nick said. That one gobble made the difference between turkey hunting and sitting in the rain like fools, to say nothing of shaking off my pessimism for the day.

Afraid of boogering the bird off the roost, we gave him another 30 minutes before making our move. Nick knew of a berm that ran to the food plot. We snuck to the edge of the field, spying the tom on the far fence line, walking back and forth. Nick scratched on his slate call, and the tom responded.

I wish he’d come running right in at that point, but without decoys, that wasn’t happening. Instead the bird circled the far edge of the field, popping in and out of sight as he moved behind obscuring palmettos. We took these opportunities to get comfortable and clicking on the Therma-Cell to beat back the swarm of mosquitoes. Finally, as the gobbler reached the far right side of the plot, he started our way, not on a fast trot, but a very deliberate pace that assured us the hunt would be ending soon.

As the tom approached, Nick whispered what my range was with my Mossberg 835 3 ½ Mag.

“80" I replied, which is true, since I killed a bird once at that distance, but we had plenty of time to avoid that level of irresponsibility. Long shots, especially at that distance, are iffy prospects, at best. You are more likely to wound the animal than anything. Plus, the thrill of turkey hunting is getting them close and personal; I’d preferred if all the gobblers I’ve killed over the years were within 20 yards or so.

But sometimes it won’t happen this way, and you need to take the opportunity presented. The gobbler eclipsed the 50 yard line, and we’d planned on letting him come closer, but I nearly botched the deal. Holding that shotgun up for so long as he approached had fatigued my arms to the point where my barrel did figure eights in the air. I shifted to steady my aim, and the bird saw me move, popped his head up and looked directly at us.

Now, I’ll admit, I don’t get Buck Fever with deer or other big game, but an incoming gobbler unnerves me to no end. This whole time I had an acute case of the shakes; however, when that bird’s head snapped up, instinct kicked in. I quickly re-shouldered my gun, placed the fiber optic front post under his chin and fired, toppling the gobbler around 45 yards away – farther than I’d liked, but in the bad weather and having potentially ruined our morning with careless movement, any shot worked.

With some high fives, we collected the gobbler and set back towards camp for photos and bragging. Unfortunately, the boasting side of this didn’t go to plan. The gobbler’s beard reached 10 inches, but the body size was puny as was quickly pointed out to me. By itself in the food plot, he couldn’t be compared to bigger or smaller turkey, he just had a big beard and a love for Nick’s calling. 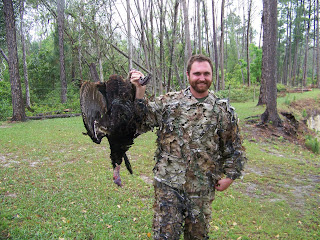 We caught a ration of grief from the other guys. Some called it the smallest gobbler they’d seen. Other, crueler comments compared it to a chicken. A few insults flew that the tom was a turkey social reject, desperate for a hen’s attention and Nick’s calling.

Friends can be cruel, but they were right. The gobbler barely tipped the scales at 15pounds. Wet, dirty, and with a tail feather missing, he did look pretty ratty. I defended his honor and declared a new subspecies of Osceola turkey – the Pygmy Osceola. Hey, if there can be Key Deer, there can be miniature turkeys. And I shot the first one ever. A legitimate trophy pygmy at that.

Ceremony and trophy-naming aside, the hunt is what mattered. We’d played around the weather, persevered and got lucky, or at least put ourselves in position for luck. As a reward, Nick called in a fine tom, and we’d witnessed him gobble and strut about the food plot, memories that’ll last far beyond caring about how big or small the bird happened to be.

So far though, I’m the only one with a trophy Pygmy Osceola. The next morning I’d take a common Osceola gobbler in an entirely different circumstance which made each bird unique and memorable.
Posted by Ian Nance at 2/06/2010 11:46:00 AM