"Well, I show up before light, listen for a gobble and work my way to him. I don't waste time scouting.”

I guess it worked for him. But I am also guessing he’s not the only one who employs this approach and has resulted in a few busted hunts and PO-ed hunters.

For me, turkey scouting was engrained at an early age – identifying roost trees, looking for tracks and scat, paying attention to where the gobblers hung out during the offseason, and getting to know the lay of the land. It was no real art and never 100% successful as turkey habits change throughout the spring, just some basic woodsmanship and observation skills. Of course, my history of turkey hunting has been conducted primarily on private lands with ample opportunity to see birds on a regular basis and explore the property at will.

Those days are gone. If I hunt private property these days, it is on an invite basis only, and I am stuck wherever someone wants to place me. Until this changes, I’m hunting WMA’s.

A lot of public land in Florida is downright daunting to the newbie. The Green Swamp, Richloam and others that allow entry without a quota are huge and access to scout throughout the year is limited. Big Cypress is even more intimidating. When season starts, you have the access, but plenty of other hunters wandering aimlessly about, too. If you can hunt during the work week, you have the advantage of access and fewer hunters, and yes, listening for a gobble and moving in is probably a safe gamble.

Weekend warriors such as me need to be a tad shrewder, I think. Again, I am not a pro on public land; I’m just picking things up as I go along. Case in point, I drew a quota tag for Chassahowitzka WMA. (You can read about my other scouting posts here: Part I & Part II). I’ve done my Google Earth scouting and have been able to get a general idea of the terrain. I’ve driven the property and got a real eye-opener. It is huge piece of thick land, and the hunting is going to be tough. Chazz, luckily, is open year-round, but it’s not exactly next door for me to scout. My next step was to ask around the Internet forums for advice. 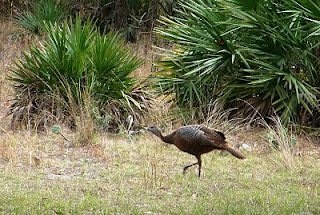 Outdoor forums have become a valuable database for all sorts of hunting and fishing information. Yes, some will be hesitant or downright hostile towards helping others, especially when it involves their cherished hunting lands, but others are more than happy to lend a hand. I try to, at least.

The beauty of Chazz is only a handful of other hunters drew a tag this season. There won’t be several hundred hunters giving a crap about the turkey here this season and reluctant to swap notes. And I’ve received great advice on how to proceed with scouting and my hunt.

“That place is awful thick and the birds don’t gobble much! We hunted off of main grade where it starts to tee to the left and right! It’s mainly swamp but it’s got large roost trees and fairly open! We found a bluff in there with a lot of sign on it and went back the next day and listened that morning for a bird! Heard 9 different birds but none gobbled after they flew down! Between 7 and 9 we killed two 2 year olds on the same knoll!”

“Get in there before they hit the ground or ur gonna be mad! They calm up right after fly down! I’m sure you will be on birds if you make the trip! Let me know if I can help any! Maybe one day I can pick ur brain on a few places??? Have fun and good luck.”

Even if someone can’t offer firsthand knowledge on laying a bird low, they may know a thing or two about the land itself that can help you plan and prepare.

Rackman at Floridafishandhunt.com gave a sobering account of hunting here:

"At the end of rattle snake camp road there is a turn around spot with a picnic table. There’s a closed road that starts there and goes into the swamp. Just walk that road and you should see turkeys all day. Move slowly and keep your eyes on the ground, snakes are big and everywhere."

Since no one invited me to hunt the opener in the South Zone this weekend, I am trekking out to Chazz to burn boot leather to check out these spots. Obviously, there are some advantages such as open access and limited hunters that Green Swamp enthusiasts won’t enjoy this season, but many of the tactics here can work there as well.

Social media is the chic form of communication these days, and promoting products and businesses and whatever else online is the norm. Going viral is the buzzword for utilizing social media to increase knowledge of whatever it is you want increased knowledge on. There’s no reason not to apply it to hunting – or, in this case, spring turkey scouting.
Posted by Ian Nance at 3/01/2010 05:27:00 PM