Gear for the Tuesday Morning Jake

I know many of you have waited - breathlessly, in some cases - for me to divulge my list of equipment I used to bring that monster jake to bag last week. Well, wait no more! 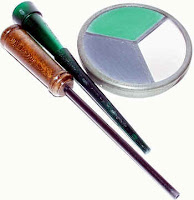 If you recall, I performed limited calling and primarily used a slate. Specifically, my call of choice was a Quaker Boy Triple Threat. It may seem a little gimmicky, but I've long been a fan of those metallic surfaces for their high frequency and resistance to damp weather. It takes a while to properly prepare the surface and to find that "sweet spot," but if the birds are quiet and I'm trying to strike up a gobble, I find it gathers the most attention. On this last hunt, I struck the pot with a H.S. Strut Magic Wand with a carbon fiber tip for that extra resonance.

When a bird is in view, though, playing a slate is a gamble I'm not willing to play. Usually, I'll let the tom close the distance on his own. If he needs a little extra coaxing - as the tom did last Tuesday - a mouth call is the proper tool. 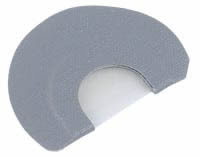 Mouth calls are intimidating to plenty of hunters. And for a number of hunters I've heard try them, they should be! In the future, I may approach the lectern and instruct the nuances of the single, double, and triple reeds, but not today. To yank that jake to the decoys last week, my call of choice was a raspy triple reed, a Primos Many Beards. I like this call - and triple reeds in general - for their versatility and raspy sound. Moreover, this call makes excellent purrs and other small noises that mimics content, feeding, and otherwise come-hither hens.

Which brings us to decoys. I usually carry up to six decoys, which is a lot, but I may set up in a spot where birds can come from multiple directions. Other times, I just like setting up that many. Regardless of manufacturer, all of them are light-weight collapsible foam, and I deploy at least one "feeding" model with two "stand-up" versions. 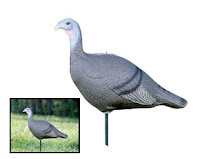 The coup de grace is, of course, the shotgun and ammo. I've used Winchester Supremes for years now with great confidence. They pattern well and hit like bricks. I vacillated between 4's and 6's for a couple years before meeting in the middle and settling on the 12 gauge, 3 1/2 inch magnums with 2 oz. of 5 shot offering. Combined with my Mossberg 835, it's a potent load on the gobbler and the shoulder.

Finally, the gun. I've hunted with that 835 for, oh, 7-8 years now, and it's done it's work when I've done mine. My one complaint is the fiber optic sights. The rear sight is much too loose, even pivoting a cool 35 degrees with no real way of tightening it down. I don't care for this, especially after missing that jake with the first shot. It's my fault because I hadn't patterned it before taking it to the woods. But, without sounding too braggadocios, something is amiss when I whiff a bird. I'm heading out Thursday to do the paperwork, and if it turns out the miss was the result of the shakes, I doubt you'll hear anymore about it. I suspect, though, this wasn't the case, and you can expect a post on patterning your gun sometime soon.

The shotgun itself is a delight for Florida hunting. A short barrel makes it portable in the swamps. The porting on the barrel eases the burden of those heavy loads. And when it's tuned in, the turkey choke causes the shot to fist-punch through the paper at 30 yards. It's even impressive farther out.

So there you go, my list of gear for that hunt. Odds are I'll switch everything up on coming hunts depending on where I go. Turkey hunters tend to have a ton of gear, and I doubt I've employed the same combination of calls and set-ups twice in a row. So, take this for what it's worth. At the very least, it may work busting a jake!
Posted by Ian Nance at 4/06/2010 04:18:00 PM

Good luck on your hunt Ian and I wish you the very best and you bring home the biggest turkey in the woods! ;)
PS: Like your slate turkey call also!