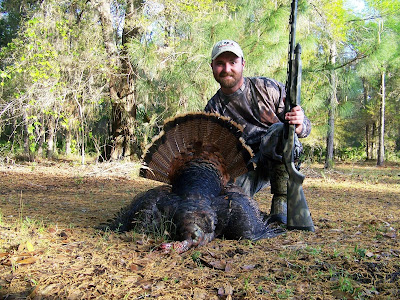 I can work a pumpgun like an evil man when I have to.

I had set up on the edge of a cypress swamp bottom flooded by the recent heavy rains. To the east was a cow pasture broken by pines and palmettos. To the north, another deep swamp of state land where hunting is forbidden. God knows where they’d be roosting.

Dawn brought no help. For the second straight outing, there were no gobbles. And on a perfect, cool morning, too. When you have a fine ambush, though, there’s no real reason to get antsy and stomp around. Plus, the lease is only 100 acres, not much land to run and gun on.

PJ had found this lease in Polk County a month ago. We scouted it for deer and turkey without much success. The hogs are thick – you’ll be reading about the hogs soon enough. Six of us bought in to have a place close to home. If we could snag a few swine and a predator or two, it’d be worth it. Available hunting land – wait, affordable, available hunting land - in Central Florida is scarce. We hung feeders and stands and expected little other than a cool escape, camping trips, maybe a dove field, and aforementioned hogs.

The cowboy had told us turkeys were in the area, but we never could find any tracks in the sandy roads. It sure looked turkey-ish – tall pines, swamp bottoms, plenty of clearings for strutting - but I kinda put turkey hunting here out of my mind.

All that changed with circumstance. My Opening Weekend plans to hunt in Nassau County was cancelled at the 11th hour. As clinically hopeless turkey addicts, Cole and I decided to give the lease a try. Everything changed that first Saturday morning with a gobble. And a few more.

I won’t go too much into those details here, but our concept of the property changed in a hurry. Of course, you do realize the realities and difficulties of six people with varying turkey hunting experience navigating such a small piece of property. The other guys spotted a couple birds and heard a few more gobbles, but nothing came of it. There were birds here, just not many of them.

My problem was timing. Every other weekend during the season had been booked, limiting my outings for a gobbler close to home. Luckily, my new job is a mixture of office and field work. When I didn't need to be in the office early, I could run down to the property with a change of clothes and get where I needed to go after a morning hunt. It had worked last week, though I had zero luck. I stared at my desk calendar, looking for another available moment.

Today was the day. My fortunes started off poor again. The mosquitoes, held at bay by the uncommonly cold weather over the last several months, returned with a vengeance. My Therma-Cell broke on the fourth "click." The skeeters took full advantage, leaving a line of pimply bite marks along the borders of my facemask until my skin now resembles that of a 9th grader.

And no gobbling. That’s the excitement of turkey hunting to me. I tend to write-off mornings when the toms aren’t cooperating. Maybe the weather had them screwed up, or perhaps the gold strike-like rush to hunt the property after the first morning had silenced them. Who knows? All I knew was, I didn’t bust a bird last year, and the desire to hammer an incoming gobbler and frying turkey bites one weekend was too powerful to give up this go-round.

Also, while I am not a super-competitive guy, especially when it comes to hunting, I did like the thought of being the first to harvest a tom on this piece of property. Sort of a “Kilroy was here” thing. So, the challenge had been settled.

When the gobblers aren’t working and I strike up the patience, I tend to ease back myself. It can be rather boring, but I always remind myself that the best turkey hunters I know don’t cluck and cackle like they are in a competition. They stay still, call softly and sporadically. I pulled my cellphone out to track the time between my sessions of turkey-like noises, slipped a slate out of the vest and settled into the long wait. If I could discipline myself to only call every 15-20 minutes, this may just work.

After my third cadence of soft purrs and clucks, accentuated with a few louder yelps at the end, a red and white head popped up a 100 yards back into the private property swamp. The excitement of such a moment can't be adequately explained with words. Chilling, maybe. Attaining the clarity of what you must do next - keeping your calm and fighting back your nerves - is a skill I still have not mastered, but this time I prevailed over these life ruiners. Again, I had faith in my efforts. My decoys, set in the trim of the cattle pasture 20 yards from my haunt, would be in clear view once the tom emerged from the dark and through the broom sedge. As soon as he strolled behind a large oak and out of sight, I slipped the safety off and leaned into a solid rest.

He sure did take his time. The tom - a healthy jake - slowly maneuvered around pines and water oaks, and lifted his head occasionally to survey his surroundings. I refrained from calling any further as my philosophy is to just let ‘em come without betraying my mediocre calling skills.

The urgent need to breed certainly wasn’t on this fellow’s mind. He fed, picking through the grass, until he reached the wire gap separating the properties. All he had to do was slide under the fence, mosey 15 more yards, and it’d be all over.

Unfortunately, he hung up. Surely, he saw the decoys but paid little attention. The tom slowly started walking parallel to the fenceline; enough was enough with my not-calling-anymore decision. I putted and clucked a few times on the mouth call, and he swapped ends and charged under the fence into my spread.

Now, listen, children. Always pattern your shotgun. At twenty yards, there is no excuse for missing. Actually, this is a TWL exclusive since I didn’t tell any of my friends I'd missed - let's see how many of them read this - but it's only noble to fess up. That long, warty neck is too inviting of a target, and I was rock-solid. After last year's hunts and a few coyote jaunts, I hadn’t put that gun on paper, and those flimsy fiber optic sights on my Mossberg require more diligence than that.

The tom didn’t take two steps before Round 2 got him. I raced up to the bird, as is my custom, fist-pumping along the way. Trophy-wise, he won’t garner much attention from the record books. As you can see in the photo, his fan hadn’t quite matured, and the beard was maybe four inches long.

Some may look down on shooting a jake, but I’m not going to rationalize my decision-making any further on this point. Save the missed shot, my strategy was executed like the pick-and-roll, and I have turkey breast to fry this Easter weekend. That, to me, is the essence of a great hunt, and I am thankful for the moment.
Posted by Ian Nance at 3/30/2010 08:31:00 PM

Congrats to you Ian! That's a fine bird and enjoy that fresh turkey for Easter. Yum!

Congrats On the Bird and on a great story.

Thank you, all. I appreciate you reading!!!!