Saturday morning was an event God hosted for turkey hunting. Clear as a bell, 48 degrees, and no wind. The owls greeted me the second I got out of the truck. So did Duane.

If you’ve been paying attention to past posts, you know I drew a Spring Turkey quota tag for Chassahowitzka WMA in Hernando County. Chazz is over 33,000 acres of Florida Nasty. Tough scrubs, deep swamps, and snake-infested pine and palmetto flats. And I was a lucky one of ten who drew this permit for the weekend of April 10th.

Apparently, so was Duane.

I could tell quickly Duane knew his business. Soft-spoken and polite, he told me of the birds he’d heard the previous morning and his strategy for today. He’d venture East into the tall pines where he knew the toms hung around. Perfect. My plan was to head West down a fire trail to the edge of the swamp and a burned palmetto flat. My hope was the toms would fly down to strut in the road before feeding into the flats. 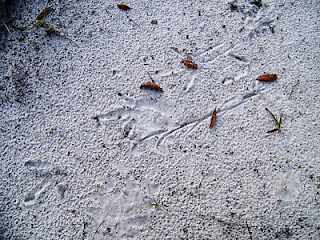 Duane took my cellphone number in case he wanted to meet later and compare notes, and off I strolled down the fire break, catching glimpses of turkey tracks in the sandy soil, courtesy of the moonlight.

I reached my designated location and clipped the shrubs around the trunk of a skinny pine tree. I placed three decoys at the end of the fire break and another to my right in the burn. I unfolded the seat on my vest and began to wait out daylight.

Chazz is a spooky place. Parts of the swamp behind me I’m sure never see daylight, blotted out by the canopies of cypress and pine. The black water that rolls underneath the trees invites pterodactyl-sized mosquitoes, spiders with the pelts of small animals on their backs, and evil moccasins. Who knows what kind of black bears and hillbillies live in those woods. I wasn’t all that excited about having my back turned to it. The owls carried on, and branches and leaves popped and crunched with who-knows-what breed of goblin crashing around. A dog barked followed by the deep, guttural squeal of an angry hog. It was hard to stay focused.

The first gobble came later than I expected. But after that initial tom, gobblers lit up from every direction, one to the right so close it shook me. He only gobbled once, though, and I suspected he was one of those nigh-inviolable swamp toms for which the Osceola gains its reputation. 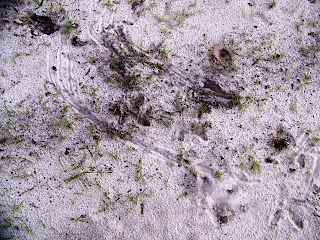 After flydown, the gobbling action flatlined. That’s when the hens chimed in. Hens were everywhere, and the prospects of landing a tom grew dim. I’d already decided against calling a whole lot, but now I thought to employ a variation of this tactic. Call every fifteen minutes, but make a decent scream when I do. Rather than getting up and closing on a gobbler, I wanted to stand out, but still have faith in the set-up.

"I am where they want to go," I thought.

Taking this route accomplished a few things. One, the toms – who were playing to the Osceola Handbook’s reputation of having lockjaw – opened back up. The excited series of putts and purrs on the mouth call, combined with a sequence of clucks on the slate, allowed me to keep a bead on a fair number of the birds. It wasn’t always an automatic response, but once one would respond to call, it was a fair bet they’d yak back at crows and owls and other gobblers. The problem was they were henned-up. Sure, they’d respond, but never travel very far. So, I leaned back to wait out the hens.

As the morning approached 8:15, a lone gobble came from up the road, probably 100 yards uphill. At the time, he was the closest candidate, so I fired back a few putts to see what was up. His response was immediate and closer than I originally thought. I adjusted to relieve the butt cramp, rested the shotgun on my knee and awaited glory. 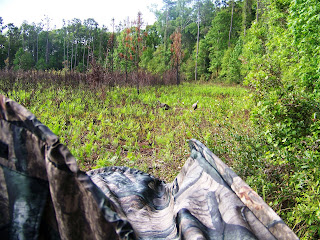 I caught first glimpse of the hen through the charred underbrush, her back shining in the sun as she slipped down the road towards the dekes. Then, from out of sight, the tom spitted. I thumbed the safety off. I could picture him strutting in a circle on that sandy road, and I fought back the Shakes. Ever so slowly, he poked his head into the open.

It's the best moment in hunting when a gobbler reveals himself. Gently, he moved forward, not a giant bird - probably eight inch beard – but he was cautious. The hen fed on new-growth grass as the tom inched towards the decoys, that warty head surveying the new company. The decision to lay waste was easy; he just needed to take a few more steps to be in the clear at 20 yards. Finally, the sights of the Mossberg 835 sat under his chin. 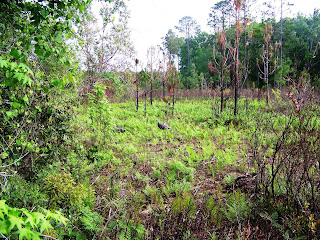 I stood in the open limply holding my shotgun, feeling like an airplane pilot who had just watched a wing fall off - completely helpless and screwed. I mean, I patterned the shotgun on Thursday! I was sure the problem with the loose factory-issued rear sight had been corrected.

Lost in disbelief, I didn’t know what to do. For starters, there was no available tree to wrap my gun around to relieve the anger, and by the time I walked back to the one I had been sitting against, this thought had subsided. Two, it was still early, and there were plenty of birds in the area. Though I hate like the homemade sin it is to hunt with a firearm that is not functioning properly, I decided to stake one last claim on the morning. I re-adjusted the fiber-optic warlock and walked over to the next cut-down.

While entering the flat, a gobbler and hen spooked back into the swamp. No big deal. I could just sit and shut up for a while. Clearly, this is an area they like. I huddled up under the only shade tree available and waited thirty minutes before calling. Only when I went to hit the slate did I realize the rear sight had again slid out of position. I corrected it once more and then noticed something odd. The sight was creeping on its own. Somehow, there was torque on the pin that held that POS together. Maybe a bend in the aluminum? I don’t know, but it was the last straw.

Duane called about twenty minutes after I left the property. He’d a heard a couple toms and saw a jake. I relayed my situation and said I’d see him in the morning, leaving him, no doubt, wondering what kind of goober he’d run into. Then, in an effort to get ahead of the story as all good politicians do, I went about the chore of explaining to loved ones of the failure.

I’d made plans to visit friends at a hunt camp in Levy County after my morning hunt, so I waited until I arrived to work on my gun. Upon pulling the shotgun out of the truck, the rear sight fell off. And, how do you like that? My buddies just laughed. We all agreed, left with only a front bead I was in much better shape.

Sunday wasn’t to be, however. The temperature was 20 degrees warmer, the air stale and humid and heavy. A slight breeze that would certainly mature into a stiff wind by 9 blew from the east. On top of it, a sinus headache from the excessive oak and cypress pollen had dampened my spirits. Apparently, too, the gobblers' for they greeted the morning with only scattered attention.

The headache, slowly morphing into a migraine, put the kibosh on my hunt around 10. All that visited my set-up was a scrawny hen and a giant boar hog. I packed my equipment and shuffled back to the truck. Though I had missed my chance, and almost certainly had an alien baby bouncing against my sinuses, I was in good spirits. I can’t curse my luck when it was lucky for me to even draw the permit. Plus, I accept equipment failure as my fault. I’d put in hard work getting to the point where I could pull the trigger. On top of that, it was an exciting hunt with a ton of gobbling. Shame about the gobbler, though. Last I heard from Duane, he thought one was coming in to him. Hope he slayed a monster tom. 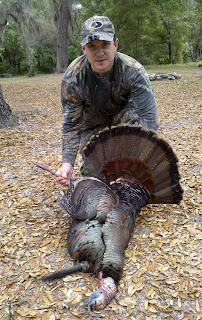 Driving back to Lakeland, Darin called with wonderful news from Levy County. When I was there Saturday evening, we went cruising the property on the golf cart. Quietly rounding a bend, a large gobbler stood in the bright green grass. Darin set up there the next day and way-laid that bad boy. No one gets more excited about taking a turkey than Darin.

Two weekends left. The shotgun will be ready. I’ve missed three birds this season, one of which, the jake, I did kill.

Three birds? I haven’t told the story on that other one yet. It was much more painful and had little to do with wobbly sights.

Well I'm only laughing with you and not at you. We have all had seasons or hunts that took a turn for the worst. Maybe you can turn your luck around these last few weeks. Good luck.