I've heard it is sacrilege to many people - Wisconsin-Americans in particular - to pierce the casing of a bratwurst while it’s on the grill, but how about carving the links up and threading them on skewers? Have we reached the point of paganism with this or what?

Every year I turn a venison shoulder or two into bratwurst. Technically, the local meat processor does, but whatever. My thinking is, it’s right in the middle of football season when everyone is grilling out, and I’m probably just returning from a hunt and don’t have the time or enthusiasm to whip up burgers or a fancy tenderloin recipe that I don’t want to waste on my boozehound friends anyhow. And brats and football (and beer!) just go together. I submit back to the Wisconsin-Americans out there to agree with me.

Call it all charity work, though. My passion for linked sausage, of any kind, is low - great for football, not so much for a Wednesday night in with the lady. Unfortunately by April, the unsettling realization dawns that I have few friends, wasn’t invited to many football parties, and have like a dozen packs of brats left. This glorious cycle repeats itself every year. Some packs are gifted away. Some packs turn into catfish chum.

Then one day, suffering through another soul-crushing shopping trip, I flipped through a recipe book that was mercifully placed in a bin near the interminable checkout line. I browsed the typical chicken and pork chop dishes and found a recipe for sausage kabobs cooked in the oven. 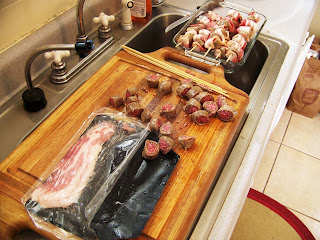 OK, well I have the brats already, the oven route is a little lame, but I think we can work with this.

Thus, I dreamed up the grilled brat and bacon kabob.

Last night’s Venison Wednesday launched this experiment. I started by marinating the brats overnight in a mixture of beer, mustard, chili powder, red pepper flakes, and brown sugar. Then I cut the brats into one-inch chunks and threaded them on pre-soaked bamboo skewers with thick, hickory smoked bacon. Cooked ‘em 4-5 minutes on each side. Finally, I brushed them with a mustard based BBQ sauce Carolyn’s father makes that should be bottled and sold.

Annnnnddddddd, they were pretty good. Carolyn enjoyed hers. Ansley barely paused to chew her so-called “meat stick." Krunk had no qualms. It’s not a recipe I’ll cook every other week, but it’s a fine change-up from your normal “simmer in beer” brat recipe. Give it a try!
Posted by Ian Nance at 4/15/2010 06:00:00 PM

Wrongfully delicious looking! lol! (BTW- for those of you who don't know me. I'm for Wisconsin. We don't use our brats for catfish chum here!)

Seriously though, they look good and we are going to try them this summer.

Hi Ian,
Ah with BBQ season soon to be on us me thinks that I'll be giving these a twist my good man. Cheers for the idea oh and it's my soccer mate 'fan' over here that is the scourge of good sporting conversation over a top meal - why can't he just like rugby...
Regards,
John