Our timing was screwed up Friday morning. The alarm hammered off an hour early, which felt much worse considering we’d only gone to bed two hours prior, having left Lakeland later than planned. Then we screwed around too long getting dressed and breakfast. So I guess it should not have come as any surprise when we walked to our planned set-up in almost broad daylight that the gobblers were already doing their thing.

P.J. and I were fouled from the beginning. The first gobble came as we debated where to sit. We scrambled into the woods and deployed the decoys – a noisy waste of time at this point – and settled by a couple trees amid what can only be described as a biblical swarm of mosquitoes. I’d forgotten to heat up my Terma-Cell and was fully assaulted, slapping my head, legs, arms, and eyeballs. Only deaf, dumb, and blind were these gobblers coming our way. Not when they’re perched a mere 150 yards away.

This is not how I’d envisioned my first turkey hunt in South Carolina. Honestly, though, I didn’t know what to expect other than to see plenty of game. I’ve hunted deer in Allendale, Barnwell, and surrounding counties off and on since I was 16. Deer, deer, and more deer, is the only way to describe this Low Country portion of the state. I seem to remember reading once that the deer population ran from 30-40 per square mile, incredible considering the season starts in August, ends in January, and farmers and other landowners obtain permits to shoot them during the offseason.

Turkey, though, were always an afterthought. Sure, I’d seen plenty of them in corn piles and elsewhere, but I’d never considered packing up a truck and leaving Florida to hunt gobblers. That was back in my younger days, a time when I had access to all the turkey hunting I desired. That changed, but my passion for turkey hunting didn’t.

Unfortunately, around the same time we lost our Florida properties, hunting in South Carolina became expensive. Way back when, day hunts on soy bean fields were $100 per day for deer, and we balked at places that charged $150-200. The guy who managed all this offered turkey hunting for $50-75, another $20 a night to stay at a local motel - cheap now considering one well-known hunting outfit charges $495 per DAY.

Our old contact at that hunting land is gone now, so I never took advantage of those relatively inexpensive hunts, and in the years since, I’ve relied mostly on invitations to treat my gobbler fever.

So, it is nice to have friends. P.J. leases 150 acres in Allendale County, a beautiful piece of land with planted pines of varying ages and a deep swamp bottom over which the gobblers tend to roost. I’d been told there were plenty of toms on the property, and I’d been ready to make the trip since we first discussed it months earlier.

Since I’ve grown up spoiled rotten on Osceola’s, I still think of the eastern gobbler subspecies as some kind of exotic game. Like a lot of turkey hunters, I dream of completing the Slam, and though Rio’s and Merriam’s are still a few years off for my budget (not to mention Gould’s or Oscellated), a half slam of Osceola and eastern in a single spring still gets me excited.

So this year, with my Osceola side of the deal completed, I was ready to take a crack at South Carolina’s best toms. And as I wrote above, the whole venture started wrong. Besides being late and covered with mosquitoes, I felt I’d stepped on every loud-cracking stick and twig in the woods. I didn’t want to say it or think it out loud, but I knew those birds weren’t heading our way, no matter what I threw at them.

The tom, and some squeaky-clucking jake, gobbled two or three more times off the roost, pitching down on a ridge opposite our location. He gobbled now and then from the ground, but it became clear him and his entourage were moving away.

After a long silence, P.J. suggested we move shop and follow the road alongside the ridge leading to the swamp. We arrived at a bend in the trail, walked another 50-60 yards, planted a couple hen decoys in the right-of-way, found a good sittin’ tree, and leaned back, calling every once in a while.

No matter how many hunts I go on, I’ll always shake my head at how different gobblers respond to different calls. Slate call, no luck. Raspy Ol’ Hen yelps, nada. Excited clucks and putts from a single reed, bingo!

The tom gobbled from a startlingly close distance from the pines in front of us. In between the trees stood tall new growth grasses and weeds that provided cover and food for turkey, but limited our visibility. Not convinced he’d planned to hit our dekes, I hit him again with a series of high-pitched clucks that sent him into frenzy, gobbling five or six times in a row.

Game on now! Soon jakes came dodging through the pines, trailed by Mr. Longbeard. My heart had long since taken to pounding as the Shakes took hold. The gobbler strutted back and forth behind the decoys as the jakes milled around, becoming more agitated as time passed. 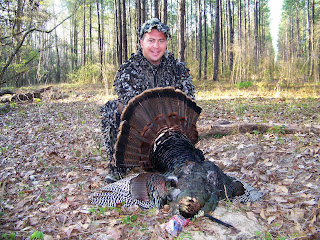 P.J., as the trigger man, swung his gun slowly towards the gobbler, but the jakes picked up on the movement, I guess. They grew spookier, so I whispered to take the gobbler. Maybe a second later, P.J.’s shotgun blasted, rolling the tom, as I tried to locate a jake to gun down as they beat a retreat, but with no luck. It’s possible we could’ve waited for both of us to take a shot, but I’d rather put one trophy bird in the bag than mess up trying to wait on the perfect double situation.

I don’t know if I’d forgotten, didn’t pay attention, or what, but the realization that this was P.J.’s first bird skipped me - and what a fine tom, sporting a 10 ¼ inch beard, 1 inch spurs, and weighing in at 20 pounds. Not a bad start to what will be a successful turkey hunting career, I’m confident.

The Shakes still rattled me as I snapped photos and didn’t settle until long after we’d returned to the truck. I can tell you, no deer or other big game leaves me as manic as a run-in with a gobbling, strutting tom. We’d gotten the Show, the absolute pinnacle of any hunting experience, I believe. Love deer hunting, but I’d crawl over a Boone & Crockett buck any day of the week to call in a tom and watch it strut in the decoys.

The next morning, we almost made it 2/2 for the Silver Can Assassins, our team named after a particular brand of Rocky Mountain refreshment enjoyed throughout the weekend. We heard gobblers back down in the swamp, but I wanted to start the morning near some strut marks in the road we’d found, surmising the birds would work their way from the bottoms up to the grassy roads to feed.

I almost knew what I was doing. Again, this tom gobbled too close for comfort. He didn’t seem nearly as worked up as P.J.’s gobbler. Only twice more did he sound off, the last gobble toward the distant pines. I don’t know if he’d found the hens we’d heard from the roost, or if I sent him a call that rubbed him wrong, but I guess I’ll never know. One for the bush, I suppose.

Sunday, the weather changed to a cold, rainy morning. We sat in the truck awaiting daylight, but this morning was over before sunrise. I’d hunted in the rain once already this year and found success, but I’m never too angry at a turkey to go out in this pneumonia weather.

Maybe I’ll get my half-slam in Georgia later this year or maybe not. I don’t know. One thing is for sure though - I’m definitely excited to return to South Carolina. The state never disappoints for deer, and with turkey, well, our relationship is off to a great start.
Posted by Ian Nance at 4/19/2010 04:54:00 PM