A blind hog finds an acorn.

When the call came Saturday morning, I was still in bed, my own turkey hunting plans scrapped for the weekend. When your Spring Season revolves around invitations to private lands, hopes can be quickly scattered. And sometimes I’m just too lazy, too negative, or too spoiled to take matters in my own hands.

Dad’s tom came from the Green Swamp WMA. The gobbler itself won’t make any registries – 9-inch beard, 1 ½ spurs, around 17 lbs. – but it was a true trophy as far as I’m concerned.

Not that I don’t realize there are plenty of birds on this property; as I said above, I guess I’m too lazy, too negative, and too spoiled. I’ve never been able to perform the mathematics that would equate me having a decent opportunity to shoot a bird on this public land. An overabundance of novice hunters interfering with your hunt. An immense amount of acreage to scout properly. Whine and whine. Yet, Dad, helming his much-maligned, Jed Clampett-autographed 1986 Diesel Suburban, rolls out of the gate with a gobbler of his own after only a handful of scouting ventures.

Dad’s first set-up didn’t do much, hearing nothing to convince him birds were in the area. So, he picked up and moved to an alternate location, noting only one other vehicle along the way. He posted up in some tall trees near a burned palmetto flat and began calling on his Gaskins. The bird never gobbled he told me, just made a couple sharp clucks as he emerged from the flat. 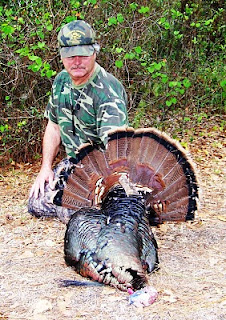 Man, this lined up perfectly - didn’t spook anything walking about, found a location away from other hunters and sat still as a silent bird sneaked in to his calls.

The tom entered Dad’s clearing too far for a shot with his Mossberg 500 and its 3-inch loads; he could have toted my 835, its 3 ½ mag chambering and the extra reach, but he’d forgot about it. As the gobbler closed in, he took notice of the inflatable Sceery jake decoy and beelined it towards the fake at such an angle that a pine completely obstructed a shot. Dad could hear, but not see his tom spurring his decoy to death.

How did the sound of that popping decoy snapping off its peg not spook the bird? That bird would have been chop suey early with my 835. Amazing.

The tom, startled by his deflated opponent but not so much to flip on the afterburners, turned back towards the palmetto flat, still partially shielded by the pine. Dad leaned over and fired a round, rolling, but not completely terminating the gobbler. The bird hopped up and went airborne, flying parallel to Dad who wingshot the tom before he could escape.

I don’t have the words to describe how fortunate this is.

After the initial phone call, I called back at least twice more, wondering if I were suspended in some breed of dream I’d previously not dreamt. I told Dad I’d meet him at the house with the camera, knowing full well I’d be catching crap for this ad infinitum, especially since I’d poo-pooed his initial efforts and scouting trips. Forlorn over plans I couldn’t control, I’d slept in, forgoing a day in the woods pursuing that which I routinely proclaim to be my favorite game of all, this Expert-In-My-Own-Mind.

I’d like to tell you that it’s better to be lucky than good, but I know this old adage is probably more appropriate:

i am also thinking about this problem of creating illness by these pigeons, as pigeon control is must for the safety of kids also.
birds control

And the Random Comment of the Week Award goes to...hamiltonbrown!