A Pair of Spring Swine

I couldn’t decide if it was the actual noise or the way it re-verbed in the palm island that was more disconcerting, but the situation was eerily reminiscent of the scene in Jurassic Park when the staff lowers the cow into the velociraptor pen. The grunts and high-pitched wheezing. The trampling of foliage by unseen animals. The gaze of abject terror on the faces of the witnesses.

This hog was pissed. Only one XP3 remained in the magazine and it vacated there and went into the chamber in a hot second. I wrapped my arm in the sling and scooted into a skimpy stand of palmettos to break up my outline in case he came busting out.

Wait! Let’s back up.

Travis and I headed down to Sarasota County the other evening, following a cold-front that had scooted south, rinsing the state and shining up the Spring. Both of us wanted – no, lusted for – pork for the freezer. Of all the whining I’ve done of late about not popping a buck this last year, whiffing on hogs had really irritated me. On the places I hunt, a combination of hunting pressure and an embarrassing richness of acorns had killed the hog hunting.

Now, though, the weather had warmed and the leftover acorns were rotting away. The trail camera finally revealed hogs returning to the feeders in the early evening hours. And deer season was a month past, giving the hogs time to regroup and reintroduce themselves to the pleasures of unleaded daylight.

Or so they thought.

I elected to hunt, naturally, where I had placed my Covert Cam and got all those great hog pics. A mottled boar was the primary target, I told Travis, but really it didn’t matter to me; I was just ready for some artillery breeze.

Speaking of breezes, stand location was a serious concern. The bow blind at this location was in the worst possible position for the NW wind. It would blow scent all over the corn. To make matters worse, the spot is basically a clearing surrounded by palms and oak canopies. When the wind blew hard, it circled around the opening like water flushing down a toilet taking stink with it. Really, there’s no escaping it, no bueno for swine.

One can try to minimize it. I hauled a folding metal chair in with me and set it under the bare branches of an oak on the SE side in the only clear view of the feeder I could get. Even then, this was no gimme shot. Sedge broom had begun growing knee-high, and palmettos and twigs obscured any potential pokes just outside from the feeder. Purists may scoff, but the hogs would have to be standing in corn, it appeared, for me to shoot.

Still, I was toting my pet Savage Tactical .300 Win Mag stoked with 165-gr. Winchester XP3’s – I’m confident to the socks with that rig.

I hosed down with Scent-A-Way, clicked on the Therma-Cell to keep the skeeters at bay, and accessed the Mobile Internet to catch up with the latest Spring Training news. I had a solid hour before I expected the action.

When hogs do arrive at a feeder, they announce their presence with authority, which is pretty damn convenient - I’ve always thought - to knock you out of reverie and man your arms.

At 6:30, a sharp grunt was followed by a “whoofing” noise they make when they think something may be amiss. No doubt, this one detected a foreign fragrance - maybe me, maybe the Therma-Cell, blast their noses - but it couldn’t quite figure it out. I listened as it noisily circled unseen along the palmetto edge before emerging from a trail directly in front of me, nose to the air and high-stepping, maybe 45 yards away.

If that won’t get your blood running, absolutely nothing will.

I didn't think there was a shot through the tangle to the front. I practically dared that hog to move left to the opening under the feeder, but she hesitated. She turned that way and took a precious couple steps. That’s when I realized I had just the tiniest crack through which to fling a bullet. It wasn’t a long shot...but it still was.

The sow rolled at that kaboom, laying still as the report echoed off. From the right, more snorting and wheezing. Another black sow trotted up and paused in the same glory-hole, this time ten yards closer standing between me and The Fallen, hair raised on the back of her neck.

As I walked up to check the hogs for any last life, the prehistoric wailing in the palms began. No way will a third pig pop out – and if this one did, it was going to be a show. 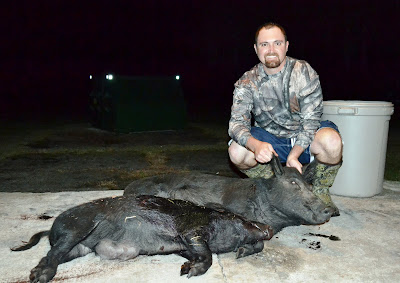 I waited and waited and listened as the bush hog paralleled the treeline and melted into the landscape, heart absolutely racing, expecting Mega-Boar and a showdown.

Ian, congrats on some great freezer meat! That had to be exhilarating as all hell. Loved reading that one.

Congrats man! There is nothing like wild hog on a grill, good friends and cold beer! I know you will enjoy!

Ian- You get me so jealous about hunting walking bacon! Beautiful hunt and even better harvests! Enjoy that freezer meat!