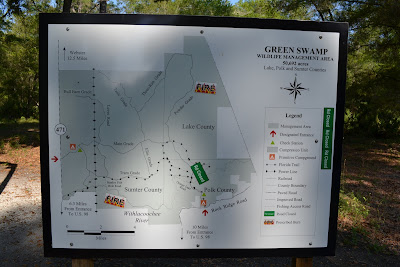 Over the years the stories of hunting accidents filtered out of the swamp. Folks shot off bikes and other head-scratchingly awful events. For a man of my hunting stature and prowess, my enthusiasm for venturing back was admittedly low.

Dad, on the other hand, started scouting around for turkey a few years back, and his efforts paid off with a nice gobbler two seasons ago. He was busted by a bird last year. That’s not bad action for a public land romp-and-stomp.

Pops reported a little bit of hunter interference, but mostly felt uninterrupted by others. Doing the math, the Green Swamp is 50,692 acres and allows 200 hunters in per day for a total of 253.46 acres per hunter which, in my mind, is more than a reasonable amount of land to hunt. By contrast, they allow 750 hunters a day during deer season working out to a paltry and potentially cramped 67.59 acres per person.

Of course, not every acre is brimming with gobblers. Some people work hard, some people work smart. I worked smart by letting Dad work hard. Dad had put the legwork in and found these birds away from others and well off the beaten path. The time was nigh to allow the Green Swamp another chance.

The gates open at 5:30 and when we arrived at a quarter after, there was already a sizeable line to enter the Rock Ridge Road entrance. Going by dangerous biases and pure snobbery, I half expected the other folks in line to be popping coldies and blaring David Allen Coe awaiting the shotgun start.

When 5:30 arrived, we got through the gate in an orderly fashion and received our daily permits from the man at the check station. We drove far into the property, believing we were abandoning the chumps who'd hunt 100 yards off the road. Well, other trucks were streaming in from the 471 entrance, probably assuming, as we did, they were distancing themselves from others. There’s a curious sociological experiment here that an aspiring behavior student should tap into.

What makes the Green Swamp so inviting is the chance to hunt Osceola’s without a quota permit after the first weekend of the season. For an out-of-towner who wants a solid chance at connecting with a Florida tom, this would be a fine place to start.

But, with all that land, it is an intimidating venue. Dad began scouting with aerial maps and applied boot leather; he trekked me on a long hike to an island of pines and palmettos at the intersection of two old firebreaks. 150 yards ahead was a line of taller pines and oaks, with a cypress swamp behind me. The open sections had been burned within the last year offering strutting zones, feeding areas and easy travel routes for any incoming gobblers. If it were private land, this is where you’d want to set up.

Realizing that hunting pressure was still a dominating concern, the only difference in my approach was in setting up the decoys. Having hunted private land most of my turkey career, I would plant the dekes in whatever fashion I thought would be most appealing to toms; here I had the additional consideration of how to position them where a gobbler could see the decoys yet I not catch a face-full of number 5’s if an Itchy Trigger Finger happened by.

The gobbling was non-existent this morning. I heard hens early, but the dawn life settled quickly as fog grew over the flats. The birds quit chirping – just one of those dead mornings that knocks the enthusiasm out of me regardless of where I am. I heard one shot within 30 minutes of first light and that was the extent of the hunter activity.

In the dark, I didn’t fully appreciate the area Dad had discovered. Again, if it had been private land – and a livelier morning – it’s possible you could have been trampled by turkey. One, there were no signs of other hunters. No foot traffic, no beer cans, no trash. But there were certainly turkey tracks, and the woods were well manicured with the recent burns. And it just looked healthy. 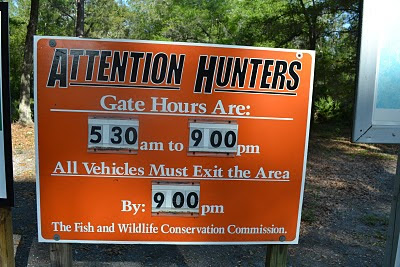 I found this to be true as we returned to the exit. The FWC, God bless them, either does a great job of maintaining lands or it goes to crap. For all the bad things I’d heard and the number of people who hunt here, I anticipated so much worse. The chalky limestone roads were in good order – despite the revving of engines early in the mornings. Most of the land appeared as our little area did. Clean and downright beautiful, as much as this thick, wooly Florida land of pines, palmettos and cypress can be.

The Green Swamp won’t be my number one turkey hunting destination anytime soon, but it is nice to know a well-kept and possibly productive place is so close to home. And I’m putting a Green Swamp Gobbler on my list of hunting goals.

Honestly, the only difference between here and a number of private land places I’ve been is you’ll have to hunt a little harder, and a little smarter.

There’s certainly nothing wrong with that.

I too hunted GS for the first time last year and thought it was really well maintained. What part of the property did you hunt?

Kidding. Um, we came in the Rock Ridge Road entrance and drove about halfway in before catching an intersecting....I honestly do not remember the name of the grade but it was in the middle of the property. Sorry this isn't a ton of help.