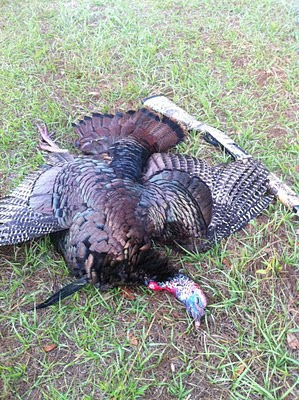 The thoughts of particular things frighten the snot out of me. Like the motion sensors on the urinals in the guys room having video recording and transmission capabilities. Or seaworthy friends discovering that even after growing up around water and boats, it still takes me at least 20 minutes to launch a boat.

Not hunting the Opener of Turkey Season is another such notion. Tremors to the bone. Even if it’s a dud as this last weekend was.

Saturday on our Polk County lease was indeed a nonstarter. The weather was beautiful, the set-up good; just no gobble gobbles. The cowboys have been running fence through the swamp. That could have contributed. There are not a whole lot of toms on this land. Expectations were kinda low, but I still enjoyed every minute of the morning.

This morning, a young bobby cat snooped around our set-up at point-blank range. Had he been around three weeks prior, blammo! As is, he flicked his tail a few times and crept into the woods. No gobbles, either.

On Sunday on private land near Orlando, PJ and I called a hen into the decoys. I dared PJ to shoot her and wondered aloud why gobblers rarely peel across a field right into the dekes like she did. Later in the morning we saw another hen and a pile of deer. Good times.

Nice, nice, it all is...but still no gobbles for me.

Friends did much better. I’m envious and filled with rage, of course. 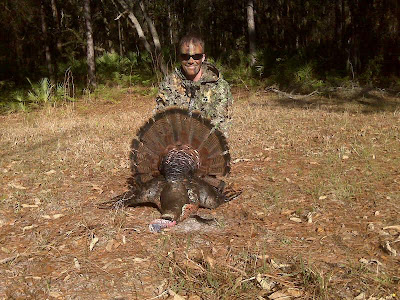 Jack shot a fine tom Saturday on his lease near Mayo. Harris blasted a bird this morning in North Lakeland (shown at top).

My favorite story by far was PJ and Cole hunting that private land near O-Town. PJ had been scouting these birds for the better part of the month. And, sure enough, one tom flew into the field across from their ambush and did what field birds tend to do – strut, gobble their heads off, and not come any closer than 70 yards.

Cole has it all on videotape – kind of. His new camera – and this being his first attempt at videotaping – focused on a clump of muscadine vines between him and the tom. The result was 17 minutes of intense, rattle-your-teeth gobbling and crystal clear video of a green leaf with the occasional blurry bob of a white head in the background.

I can’t decide if it was just rakishly amateur video, or Cole was pioneering the first conceptual art hunting short film. I have my guesses, though.

It gets better. The gobbler, after 17 minutes, grew tired of gobbling at their slate calls, and passing noises, and even whistling bobwhites. He topped a berm that runs the western length of the field, probably towards hen noises that didn't sound like they were dying of strep.

(Just a quick videography tip. If you have smartass friends you plan to show your hunt to, edit out your calling attempts. It doesn't matter if you're a regional grand champion. One slipped squoink or squink and the critics pile on.)

The camera shuttered off amidst much trembling and whispering and clanking of plastic.

As the story is later retold - many times over during the course of Saturday afternoon – PJ and Cole hopped up from their positions and ran to the berm, army-crawling to the top. There they spied the bird, 45-50 yards away slowly walking across an opening.

They both unloaded to the plug. PJ was supposed to shoot first, but knowing Cole, the time lapse between their first muzzleblasts probably occurred in an increment the human brain can't comprehend.

The felled gobbler looked exactly what you would think a large bird that caught 5-6 rounds of #5’s from frenzied and jacked-up hunters would look like. Several tail fan feathers missing. The breast bare of plummage. It looked like it flew into a powerline or windmill. But it was the first Osceola for the both of them and made for a fine story. 9-inch beard and inch spurs. Not too shabby. 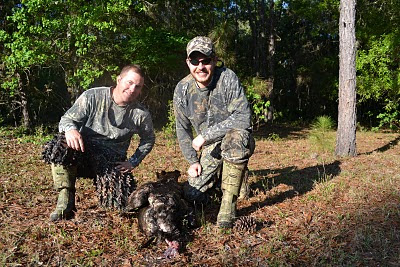 Check with me Saturday! That's when our season begins!

Will do. Good Luck!