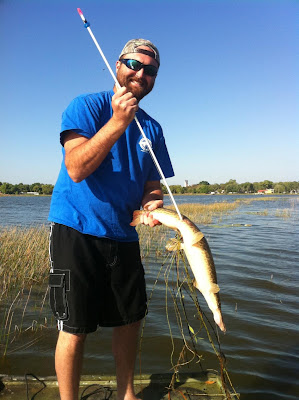 I would have placed my chances of cracking that gar with the 1st shot at about 10,000:1. But, lo and behold, I spasmed a brief moment of competency and, Whack!

Missed the second gar, then the line snapped on my third attempt, ending my archery day.

The hand reel that came with the PSE Kingfisher has a little rubber tab that holds the line in place so it isn’t blown away and unspooled by the vagaries of the wind. But the line also rubs on the screw that holds the tab in place wearing it until the 20th or so shot when it just becomes too much. Without any major gift-giving holidays or birthdays close, I may have to wait awhile to replace this travesty unless I can convince my beautiful bride that a new reel belongs in the Bunny Basket.

I’m pushing the AMS Retriever Pro. A pair of gentlemen I know have them on their bows and it just looks so easy. Have queasy feelings about the reels that actually resemble reels. Buttons have to be pushed, and I have heard stories about big tangles and messes. Apparently not so with the AMS.

I’m scared of this bowfishing thing. It is strangely addictive. I’m not even a huge archery fan for big game – something about sticking those fish with a recurve appeals to me. Not sure why yet.

Accessibility to the game could be one major selling point. I stuck this gar on Lake Bonny in Lakeland 10 minutes from the house. The water is about as filthy as a stopped-up truck stop toilet, but it is sure rife with gar. They laze near the shore in the tall aquatic grasses and reeds. You have to spy them quick while the boat is underway to take your shot. After we lost my arrow, we started gigging them; if that gives you an idea of how close you can get.

Central Florida abounds with lakes such as this. I’m also interested in expanding my bag. Banana Lake in the Highlands City area harbors a ton of plecostomus. Tilapia would be fun sport this spring as they bed up. Basically, any fish not designated a sportsfish – bass, bream, bluegill – is considered legal game for freshwater. There’s a ton of trashfish in these waters.

And nighttime bowfishing? That’s what the pros do. Before you know it I’ll be entering tournaments and granted sponsorships.

As I said, I’m scared of this bowfishing thing.

Email ThisBlogThis!Share to TwitterShare to FacebookShare to Pinterest
Labels: bowfishing

Looks like you're getting pretty good, That gar can't be easy to hit. I would like to try it but I really don't need another obsession either.

Bowfshing at night is the best! I haven't been around to fish during the day yet, but so far, I LOVE IT. Now I just have to find out some way to get a better bow.. :-)

I think hunting with a crossbow would be pretty cool...thanks for reading!