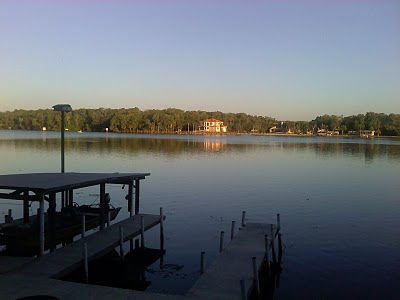 Homosassa is one of my favorite places to be. I grew up taking the summer annual scalloping trip with my folks and their friends until the season was terminated in the late 80’s. When the season resumed in the 2000’s, Travis and I were pounding the backwaters for trout and redfish the area is known for. These days I stay at my in-laws place directly on the big river. I don’t fish as much anymore thanks to a bad back, but I still cherish every trip up there.

For those of you who are unfamiliar, the Homosassa River is an 8-mile waterway that originates from a freshwater spring that flows west into the Gulf of Mexico. Surrounding the freshwater lengths are homes and hydric hammocks and swamps of holly, cedar, sweet bay, magnolia and cabbage palm. As you approach the salt, mangroves and reeds replace the tall trees. Treacherous oyster bars carved by the strong tides jut out from the river and have claimed numerous lower units and props over the years.

The brackish transition between fresh and saltwater invites a diverse range of wildlife. Many have adapted to traverse across both environments.

This last weekend Carolyn and I repaired for a weekend of touristing. No boats or best-laid plans; just relaxation and taking what is offered. We toured the local flea market and local restaurants. We read books and magazines in the sun. It was a grand time.

But I am the restless type, especially around nature – and this is the Nature Coast – and reading and flea marketing is great and all, but that wild spirit moves me. There’s always something to catch or photograph.

So let’s get through a quick photo diary of this last weekend.

Manatees are the preeminent attraction in Homosassa. They move up the river from the flats in the fall before the water temperature gets much below 65. Cold-water intolerant, they develop lesions on their skin when the temperature dips. These sores get infected which eventually kills the animal. As such, manatees congregate around the freshwater springs where the surrounding waters hold a constant 72 degrees year-round. It’s no trick to see dozens of sea cows huddled up by the Homosassa Springs State Park or traveling the channels of the river during warm spells. In late Spring they leave these comforts and return to saltier destinations. 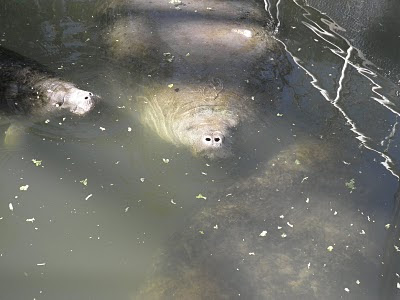 I try to respect their privacy – and once you’ve seen one, you’ve really seen them all. With so many manatees in one place, it’s no real surprise that certain bends in the river become sea cow brothels. It’s easy to identify these locations by the swarms of pontoon boats. I reckon this is one reason for the sea cows’ endangered status – I’d have difficulty procreating, too, with 3-blade props blowing past my whiskers.

Manatees are protected during these months by No Wake Zones...which some, like this genius towing a tube, choose to ignore. 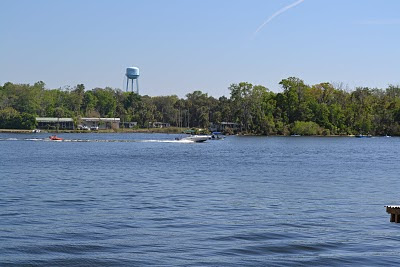 By the way, for any law enforcement officials reading, his registration number is FL 2155 L7. He was finally waved down and scolded by a local crabber.

Speaking of crabs, blue crabs were thick this last weekend. It’d been a while since I’d boiled any blues; they are trouble to eat, but God are they good. And since I had nothing to do...

(Usually we buy them at Shelly’s – a must-visit for the seafood lover. Just wanted to fit that endorsement in there!) 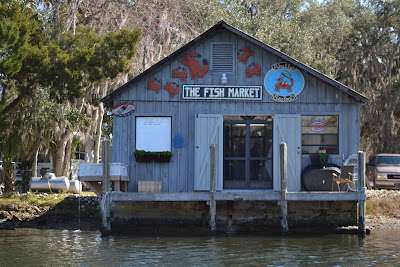 I attacked the crabs in two ways. One, traps baited with chicken necks bought at Publix and half a mullet. I tied two off the dock. 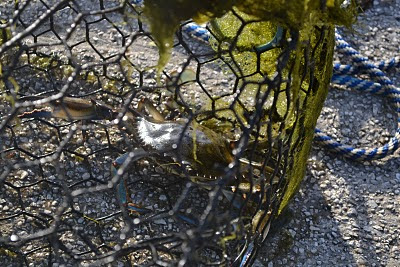 This accounted for a few, but required far too much patience. So to complement this approach, I took a cane pole with a split shot and a small hook and affixed a piece of leftover chicken. I’d locate one and dangle the bait until the crustacean reached up and grabbed hold. Then, I’d slowly coax them within range of the dip net. I got 19 in two days, including one I think will set an all-tackle record. I should have had my bangstick with me to subdue him. Not bad for angling right off the dock. 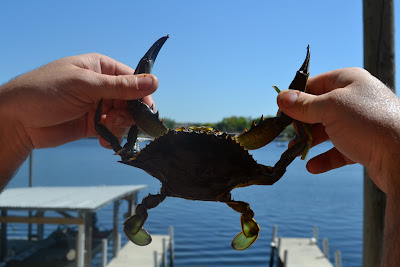 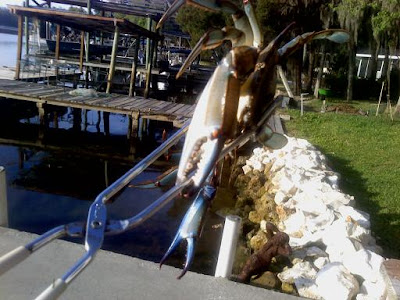 Regardless of how they were captured, they ultimately met their demise in a pot of boiling water and Old Bay seasoning. (Boil 10 minutes, immediately reduce water temperature with ice, and let sit for 30 minutes before eating.)

Other tasty outdoor treats swam by, but they were out of season by a month. Wood ducks are year-round residents of the Homosassa River. They raise their young in the duck boxes and swamps bordering the waterways. As you can see, there’s one family group already this year. 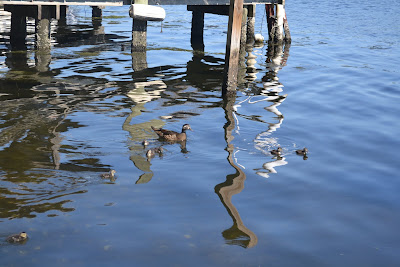 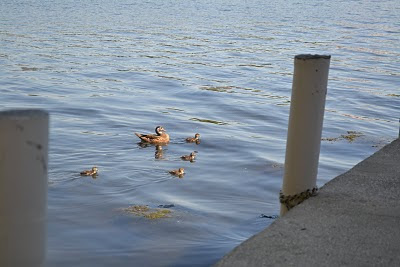 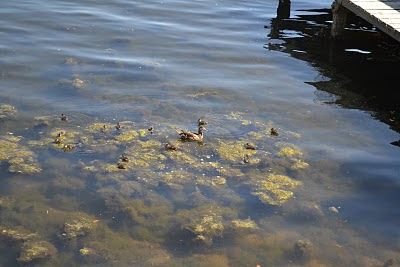 By May other hens will be paddling about with their brood. I tried to get close pictures on some of the drakes, but they proved elusive. The neighbor said the original hatch was 16 chicks. Bass, gators, turtles, anhingas – all will take their shots at the young ducks. The mother is super-protective, but she can only do so much. 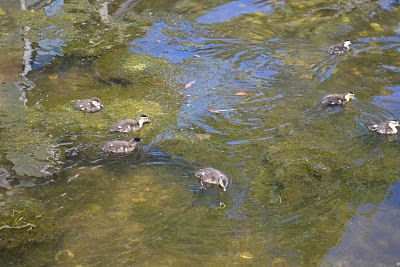 The river is home to marauding bottlenose dolphins, as well. They corral the mullet into balls and swoop through, tossing their prey in the air. It’s impressive. On Sunday we really worked as one coherent group – though I doubt Flipper knew he was helping me. I had my new PSE Kingfisher, still a virgin in the bowfishing fraternity. A school of mullet, terrified by the dolphins racing through their ranks broke into tightly-huddled balls, one of which tried to hide by our dock.

OK, it was basically a flock-shot, but I did pop my first fish with the PSE, thanks, Friendly Dolphin, King of the Sea. 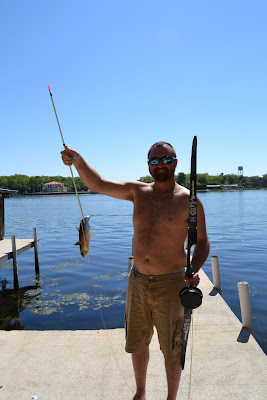 By the way, minus a Wife-Beater and Trucker Hat, this is the attire and physique of the Common Bowfisherman.

During the late winter and early Spring, the river is absolutely alive with wildlife. Ospreys flew overhead constantly, always on the lookout for the poaching eagle who’ll wait for their smaller brethren to catch a fish before swooping in to steal it. Sea birds like brown pelicans intermingled in the brackish waters with the woodies. Gar and bass flittered by while I was crabbing.

No place better to relax. 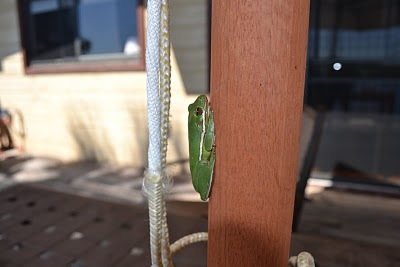 Damn, I felt like I was right there. And yes, the physique - right on. I can attest to that. Good to hear you had a nice relaxing time. Awesome job on the crabs, too! Why do you ice them down for 30 minutes? To get them to solidify in the shell?

Love bowfishing..even though I have one fish to my name. You need a reel,not the spool PSE provides on this rig.

That's a nice weekend right there! Makes me long for some sunshine and saltwater!

1st nice weekend of sun we've had in a while. Totally re-charged the batteries

What a great post! It was like I was on a mini vacation right there without leaving my recliner or my cup of coffee! (Not that I wouldn't trade locations in a second if given the chanc because I would. We still have snow. Allot of snow.)

Sounds like a pretty awesome place to spend the weekend. Great photos too.

Dang Ian, that makes me want to visit the sunshine state as soon as possible, love the seafood.

Looks like that new camera is getting some work, keep it coming man!