The Turkey Hunting Craze really hit the gas around the mid-90’s. All sorts of new guns and gear flooded the zone, and us being hunters, we bought what they sold us – 3 ½ mags with camo stocks, extra-full chokes, and red-dot scopes. New loads were developed that promised (and delivered) increased down-range lethality. Largely inexperienced hunters drove the market to offer further reach and heightened killing capabilities from our weaponry. 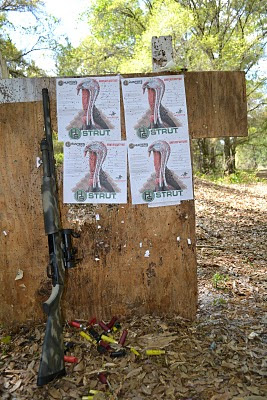 The old guard – those Turkey Gods who hunted with beat-up 870’s with full chokes, a rusty front bead and religiously killed gobblers at 12 steps – guffawed like old guards tend to do.

OK, this is stereotyping. But I will say with conviction, the discipline of utilizing these new firearms in the field has not stayed in step with one’s ability to purchase them at the gun store. These cool new toys have led to turkey hunting heartbreak for those poor souls who went to battle with an unproven weapon.

Patterning your turkey gun is but one neglected chore. Funny thing happened along the way towards developing these specialized gobbler-getters – we made shotgunning more difficult. With all the high-tech loads and chokes, 12 steps now means firing a golf-ball sized flock of lead at a gobbler’s head. To combat this, naturally, we needed more sophisticated sighting equipment, hence the red-dot sights and turkey scopes. We must sight-in our shotguns or make darn sure we trust the integrity of standard issue open sights or beads on several brands of scatterguns, hoping they point in the right direction. And with the scopes or red-dots comes the risk of knocking them off “zero” or praying you don’t have a battery malfunction.

It's not all that bad; you just need to learn the new equipment.

I trusted the open sights, for years, in fact. Then I suffered a colossal equipment failure last year after patterning my gun and two gobblers are still wandering the Florida countryside as a result, one who has a few waddle piercings, for sure. So, I attached a Tru-Glo Gobbler Stopper Red Dot Recticle atop my Mossberg 835 with it's ported barrel and extra-full choke – once a thoroughly modern outfit, now a relic compared to the smoothbores on the market today. This season will be the proofing session, though I'm so far pleased with the Tru-Glo's ease-of-use.

So that’s one reason for patterning your gun. Making sure the sights are correct for the pattern, that you are correctly aiming your shotgun, not pointing as the case used to be.

Next reason is to learn limitations on your gun and load. A 3 ½ mag is a beast of a round – on your shoulder as well as your target. But it is not infallible. I once thought so and have taken a few lumps as a result. Shooting 45-50 yards has become en vogue on TV, and tragic stories from the field permeate otherwise civil hunting discussions amongst those who believe they should be shot at arms-length.

For me, I have a limited time to hunt each season and will take the first reasonable shot I have, no apologies, whether that is 15 yards or 45. I want to be prepared for either scenario.

So, to the range!

One, purchase a package or two of turkey targets. HS Strut makes a fine copy that I used for today’s lesson. Yes, you can make your own, but those with anatomically correct pictures can really help illustrate what the pattern is doing. You may also find targets to print online.

Two, don’t think it’s a great idea to bang away on a box of 3 ½’s one afternoon. My Macho Man days are past, thank you very much. You may end up developing a grand flinch. Flinches cause you to raise your cheek off the stock, come off target, and whiff big-time.

But, I still want to hunt with these loads. There’s a much less painful – financially and physically – way to sight your shotgun in. Grab a box of 2 ¾-inch # 7 ½’s like you’d dove hunt with and commence your zeroing session.

I assign each target a distinct distance - 15, 25, 35, 45 yards - and take one shot at each and make adjustments as necessary. If it's on-line at 15, you're probably going to be OK at further reaches but it is still best to check. Since we are firing more than one projectile, we want the center of the pattern to hit the neck area on the target. Once I'm satisfied with the 7's, I'll tape up four more targets and grit my teeth through the 3 1/2's 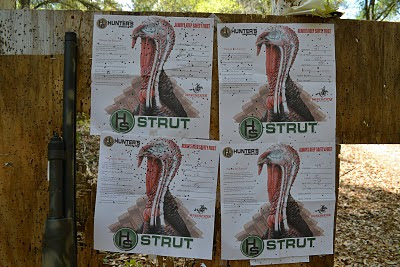 As you can see in these photos you get a decent idea of the center of the spread, though at 45 yards it gets a little watery.

Now look at how this compares with the Winchester Supremes 3 ½-inch # 5’s. 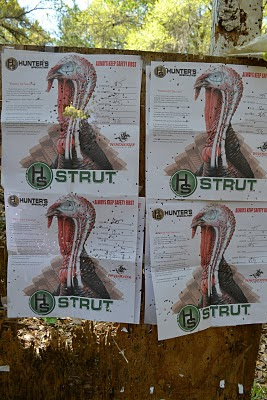 Pretty comparable. It appears at closer ranges the smaller pellets fly a little higher than the heavier, and drop faster at longer ranges, which makes ballistic sense. And you notice, too, how the pattern fizzles so markedly at 45 yards. This could just be my combination of gun and load – yours may do better. There were still 9 pellets in the vitals at that distance which is fried turkey breast.

The 15 yard mark is obviously the most vivid. And here you can see how being off just an inch or two could result in a missed or wounded gobbler. 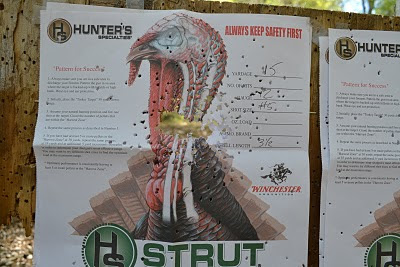 Patterning shotguns, as an obedient practice, is in its adolescence. Spoken capabilities of a person’s gun and load is often conjecture and speculation. I still know plenty of folks who don’t invest the trigger-time necessary to be flapping their gators.

Even if they blow beer cans away at camp and put fist-sized holes through paper at 50 yards, don’t assume your shotgun will behave the same. It is important to learn on your own what your particular rig will do.
Posted by Ian Nance at 3/09/2011 01:26:00 PM

Very well said and something that all turkey hunters should do. I think I read that the average turkey kill comes at a range of 17 yards or less, but I do like knowing that my Browning will reach out there a little farther! I know this because I have followed this advice and patterned my gun! Nice post!