The Trouble with Hound Hunting

Also known as coursing, running dogs for game – deer, bear, wild boar, mountain lion and small game – is a centuries old practice steeped in tradition, performed by the common folk and regal alike. But times, they are a-changing.

My first hound hunt is certainly in my Top 10 Hunting Experiences. A cold weekend in North Carolina, we sat in trucks along graded roads between swamp bottoms and planted pines listening as the beagles and blue ticks chased whitetails through the woods. The sound of some slow-drawled Carolinian would come screaming across the CB for the nearest truck to race over to whatever open area the deer may run through. These places were typically named, “The Smoke House” or “Tucker’s Grade” and other signatures no doubt ascribed from stories of the past.

If you were the lucky truck near the action, the cacophony of baying hounds carrying through the woods approaching your position would get the knees knockin’ as you rack a round of buckshot in the chamber, nervous of where the buck will burst through. More times than not, the deer knew his game, giving only glimpses of antler, circling back through a block of pines, and the yelling on the CB would resume.

Sadly, I never connected, but what really impressed me was that in this sport of 4WD’s, CB radios, and electronic dog collars, the hunters were terribly proficient outdoorsmen. To hear a faint howl and know where the dog was heading was amazing – more amazing was hearing the courser declare that the buck would never hit the rural highway, rather retreat to the swamp and shake the hounds. He was always right. With genuine respect for their quarry, these were true outdoors people and as close to mastery as can be witnessed from any outdoors pursuit.

More than this, the hunt was attended by sons and daughters, wives and girlfriends, and the elders, like one old gentleman posted on the end of a dirt road in a folding chair, double barrel shotgun resting across his lap – never misses the hunt. One boy had a decal on his Ford of Calvin peeing on a tree stand. They were serious about this style of hunting. And while I’ve been on other social hunts, like for dove, this was my first contact point with a true Southern, community-oriented hunting tradition. I’ve seen nothing like it since.

As much as I learned on that hunt, I’ve been on the other side. See on that adventure, we had a few thousand acres to run and bothered no one. Dogs running on others’ properties just wasn’t a concern. A few years prior I sat in a South Carolina deer stand on a semi-guided trip, caressing my trigger and contemplating canine-icide. Some thoughtless hunter had released his dogs on this private property and was looking to profit. I’d saved and paid a pretty penny to be there, and some rube just dropped his mutts off by the fence. The dogs – mongrels really, not the fine packs in NC - swarmed the area, running back and forth howling with no real purpose, until finally retreating east to God knows where they were reclaimed. 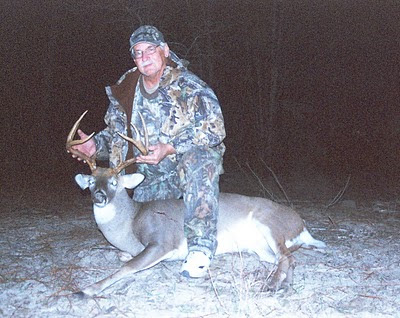 Before I get any stern letters from dog lovers, let me tell you, these aren’t Man’s Best Friend – these hounds are bred, born, and will die deer hunting, not unlike their owners, which makes this whole debate so passionate.

In the last few years, most southern states have restricted or totally banned hound hunting – for deer at least. Game departments don’t want to put up with the hassle of complaining land owners. More and more pieces of land are being leased in smaller blocks than what is adequate for coursing.

There are still pockets of the South where this is not true. Florida's WMA system does a decent job of offering dog hunts in places, notably around the Big Bend. I'm sure this is true in other states, as well. For the most part, though, private land opportunities have been greatly diminished.

Hunting, too, has changed as hunters became more educated about deer and deer habits. A great deal of dog hunting was born from necessity. You look at those Carolina woods and explain to me how rabbits get through there, much less bucks and blue ticks. These safe havens were once nearly impenetrable to the still or stand hunter. Now we have food plots and feeders to lure deer in the open. Aggressive doe management reduces the buck to doe ratio, making bucks more active and competitive for receptive does and more susceptible to stand hunters. And attitudes have changed with the success of these practices. Quality deer management is not easily implemented while trying to gun down a buck with beagles on its heels.

That property I hunted a few years back now caters to only stand hunters, regardless of Calvin’s sentiments. People began leasing land nearby and predictably didn’t want dogs running through their food plots. And in all truth, I’ve hunted that property several times since - actually will be there on the stand Monday - and the hunting has become outstanding. There’ll be no going back.

This is not an indictment of coursing. I respect the tradition and can personally account the thrill of the chase and the skill of those in participation. I’d like to believe that we as sportsmen can have it all ways, but that’s simply not true. Hound hunting, for the most part, is on its way out, but at least I have faith they’ll go down swinging.

Glad you had a good however unfruitful time in NC! I've always wanted to run dogs and it looks like with the restrictions, I'll have to jump on it soon. I'll be following!