October Trail Camera Pics with a Side Topic on Corn

One hunting topic that never fails to rile up an argument is the subject of baiting, specifically the use of corn feeders. The Pro-Cheaters...I mean, the Pro-Corn crowd beats their drum to the cadence that hunting food plots or mast crops is no different, feeders help bring and keep game on the property, and assist in managing over-populated does and hogs. Amongst other arguments.

The Anti-Corn crowd...by which I mean, of course, the Purists...believe hunting by feeders is an unholy act that only private land scumbags with no ethical chords in their bodies would practice.

Nine times out of ten, if you ask this last group if they’ve ever hunted over corn, they’ll answer, “Well, no, but I don’t need to to know it’s wrong!”

Please. All this shows is that this vocal crowd – and I don’t want to offend anyone who elects not to hunt over corn or legally can not; I mean to offend those who worry others over for their choice to do so – generally does not know what they are talking about and is highlighting their own lack of practical knowledge through hypothetical pretense.

As the immortal Jimmy Buffett once sang: "Don't try to describe the ocean if you haven't seen it/Don't ever forget that you just may wind up being wrong."

Case in point, our lease in Polk County. The hogs are thick and have attacked the feeders throughout the summer, but who wants to sit in the heat during the summer? So we’ve, more or less, waited on the arrival of bowseason and cool air to whack the hogs. Easy Peazy, Lemon Squeezy. (A lot of planning for swine, huh?)

It’s time. Problem is the hogs aren’t there! These Corn-A-Holics have been avoiding my feeder and trail camera - and everyone else’s - for the better part of a month.

The answer is in the acorns. There is a large mast this year, and wild game will abandon corn fields and food plots in a hurry when this happens. I’ve noticed this in every state I’ve hunted that has acorns hit the forest floor. Why? Hell, I don’t know. One guess is I think it is so hardwired in their DNA to seek acorns during the fall they can’t help themselves.

Two, corn is a high-energy, low-yield food while acorns are high in all kinds of proteins and nutrients. Yellow corn will fill stomachs and make hogs fat, but much like if you compare it to Big Macs, who wants that when filet mignons are falling from the sky?

Just a couple theories. Some biologist can explain it better than I.

Back to practical hunting. The option now is to stalk the thick, swampy, small property with a bow, thus dusting human scent all over the place, if we want a hog. This pressure will probably spook them off for the months when acorns aren’t on the ground or send them completely nocturnal. Hogs will succumb to hunting pressure must faster than people think.

I'm here to tell you, feeders are not a magical cure-all. Some actual hunting skill is usually required. Over a decade or so I've killed many, many hogs off feeders (and not a single trophy buck, either). It's not 100%, and in fact, they will avoid offered corn at all costs if the hunter screws around it too often.

I’m practicing patience and will wait to hit the woods until later. I want a big boar. I want another shoulder mount. I want to pop him while he’s banging on my corn feeder. I've been biding my time, scouting by camera, and staying off my stand since we got the property.

On with the pictures! The camera sat in the woods for two weeks and only captured 80 photos, mostly of raccoons. (Quick tip – if you find crunched-up corn under your feeder, it is raccoons. They don’t eat the whole kernel like deer or hogs. They munch the germ and leave the rest for the birds.) 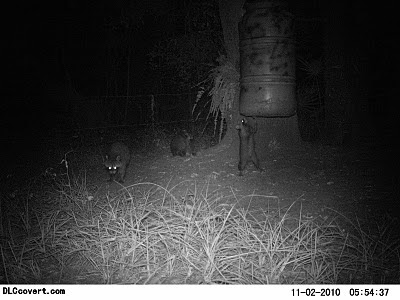 I'm not sure if this creature eats corn or not. He may eat a .17HMR if I ever catch up with him, though. 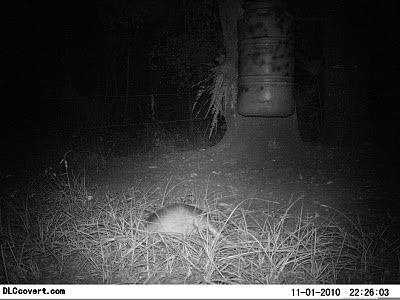 As will this one. But I KNOW they eat corn. Judge for yourself. 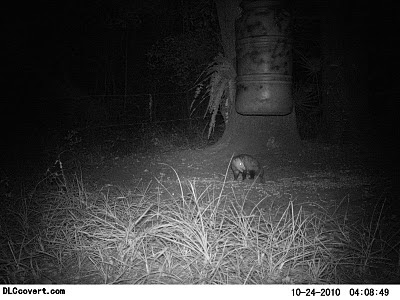 My only evening of hog pictures in nearly a month. Not a single one taken during daylight, shooting hours. And certainly no trophy hogs. Geeze. 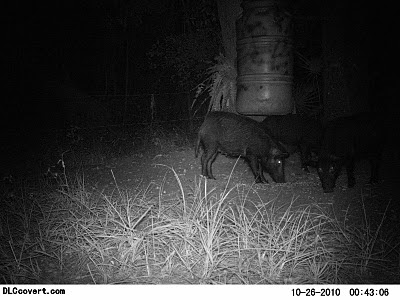 Personally, I'm not against feeders. I use them to get hogs from over there to here, and then I figure out how they got from there to here.

As you said, if you hit them at the feeder they'll won't be back when you can get them.

I prefer to ambush them on the way to or from the feeder preferably at dawn.

I've never had the opportunity to see deer at a feeder, but I am seriously considering putting one up when and if I am in the states through a late summer to winter season. I live in the 'burbs now, and I know there are tons of deer. Just a matter of getting them patterned. and that is where a feeder can help.