I’m not going to lie to you – well, not this time at least – so in the interest of full disclosure, I will admit I powdered a young buck with all the potential in the galaxy to become a great trophy. Remember this in a few weeks when I post a blog about not harvesting cull bucks and letting deer age to maximize antler potential. Hypocrite, yes, but at least an honest one.

I just couldn’t help myself. Sure, he was scrawny-bodied and thin-antlered, who, judging by the scars on his face, kept getting bullied by larger deer. There was no way I could argue he was bigger than I thought, especially when I popped him just feet from the stand. He rut-stunk to the point the stench still lingers under my fingernail beds and was stricken dim-witted by love.

Wow, that’s a God-awful eulogy. And not fair. Happy to take him. But why did I? Well, let me account myself in a Top-10 list, if you please. A few of them contradict, but what the heck - I’m a hypocrite anyhow.

10. For the freezer – In all truth, I’m an unabashed meat hunter. My girlfriend loves venison, I love venison, and quite frankly, the five deer in the freezer now won’t make it to next October. I’ve been trying to whack a doe since September, but have had no luck; all I’m getting are antlers. I find there’s not much sympathy for me here.

9. Last Georgia Trip – This was my last Peach State trip for the year and possibly for a long time. Doubt I’ll be able to afford the lease next year, and in any case, I’m kinda ready to explore a new place. I get restless. Just this season I’ve been invited to Montana, Kansas, and Arkansas and could have paid for all three with money to spare for a cocktail at the airport lounge for what I’ve doled out to the deer of SW Georgia. On the last day of the last trip, think it’s neat to walk away a winner – or as I tell friends, give the critters of those woods some fear to remember me by. Kilroy was here. 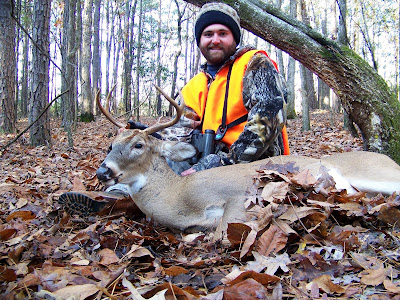 8. A Great Stand Location – As I wrote about the “One Hitter Buck," I love when a plan comes together. I’ll be the first to admit, I’m not the best deer hunter, but from time to time even I prove to myself I may know something about deer habits. This stand sat a hundred yards into a pine and oak-wooded edge bordering a large soy bean field. Other hunters placed ladder stands overlooking the field, but I surmised the deer would hole up here before dark or pass through in the morning avoiding the open after the first of rifle season. Two years ago from this stand I killed my two largest bucks as they wandered around the field in the morning and two fat does who fed amongst the few oaks in the evening. And saw plenty of other does and immature bucks. This smaller six-point served as an ego-boosting, pat-on-the-back reminder that occasionally I can dial up the right play, even if it doesn’t result in a trip to the taxidermist.

7. Revenge for Last Year – Revenge, spite, reprisal, call it what you will, but I spent over a month hunting that lease last year and saw one buck, a piddly five point I let walk. With the One Hitter and this guy, I sorta evened the score, though I risked angering the QDMA gods and dooming myself to four years of buying beef at Publix.

6. 28 degrees – The temperature had dropped to 28 degrees from 42 the previous morning. My toes were frozen, and I wanted something reward this vigilance.

5. Beat the Moon – In the same tune, the moon was bright full – fullest I can remember in a long time. Deer go vampire and avoid the daylight when this happens here. With the cold weather, I just about stayed in bed. Busting this buck at 9:15 was an accomplishment. Not a single other hunter even saw a deer during the week.

4. It Wasn’t a Spike – I’ve joked this season that I’d like to harvest a spike for no other reason than they are the most protected deer in the woods anymore. After hunting all season on lands I’m not supposed to do such a thing, I was free to do so here at my discretion. I imagine it’s akin to visiting some remote tropical island and spearing green sea turtles – wrong in most places, but when you get a rare opportunity here, take advantage. I saw a spike the night before but didn’t shoot, with no regrets. But why OK on the 6 when both were young deer? Wasn’t all that long ago that 6’s were true trophies in our camp, and while I generally have shown restraint in the past few years letting bucks bigger than this one walk, well, I guess there’s still enough young hunter in me to get excited about any set of branched antlers.

3. Other Hunters Hadn’t Seen Anything – That “young hunter” thing is true too about bringing deer back to camp when no one else has had any luck. Immature? Obnoxious? You bet!

2. For the Lodge Pole – Honestly, I’m generally not much of a braggart, but I’d been shooting my mouth off all year about just having fun again, abandoning trophy hunting, and stocking the freezer. Thought I’d be way-laying does. By the time this 6 meandered up by the Summit, three sets of antlers were back at home and another pair sat in the kitchen at camp: the Duette Bow Buck, the Levy County Buck, the North Carolina Mistake Buck, and the One-Hitter Buck. Never had such a string of luck. I’d planned on mounting these horns to a piece of driftwood to commemorate the season; this guy just capped it off. (By the way, if you have seen or have or know anyone who has a similar display, I’d love to see pictures.)

1. Because I Could Do So – That’s the freedom of hunting. I know I’ve written before, somewhere, that shooting a deer just because I can doesn’t do it for me much anymore, but reasons – like the previous 9 above – change. Next season I’ll probably return in earnest to adhering to the tenets of trophy hunting and QDMA. But I will tell you one true thing about deer and deer hunting that is forgotten, sadly, in these days of tall tines and TV shows. This deer was ethically hunted and harvested with knowledge of the land and deer habits. The guys at camp responded with hearty handshakes and congratulations from one deer hunter to another. The meat will entertain and nourish family and friends, while the antlers will forever live with me as a one-of-a-kind piece of artwork to remind me of that morning.