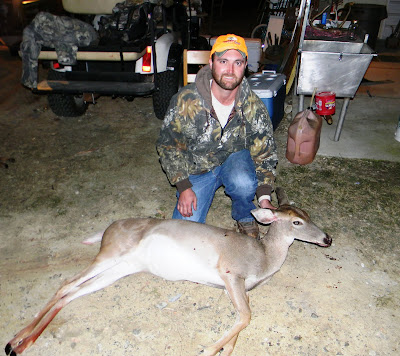 The spike mowed through the sweet potato pile smacking his lips and paying very little attention to anything around him. This deer had been seen several times before. He was thick-bodied for a youngster, probably 120-130 lbs, with 7 inch antlers that forked slightly at the tips with one freaky-long chin whisker that illuminated in the remaining daylight. For an hour he fed in the bait pile.

Two does emerged from the opposite corner of the cut corn field, lingering under a ladder stand. One ate the edge browse while the other held sentry. They looked to be about the same size, but the one acted more mature. I have a difficult time judging the dimensions and age of does without a reference point. I kept thinking about the alert doe, talking myself into believing she was a tad bigger than her counterpart. It would be a 250 yard shot so I held off for a bit.

The spike finally spied them and abandoned his binge eating. He lowered his head and walked to the does. They were unimpressed and coldly shunned him. Embarrassed, he retreated into the block of thick North Carolina woods. 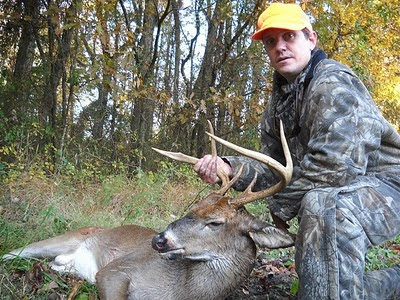 I watched all of this from a Porta-Potty. OK, it was a Porta-Potty hoisted up on a wooden support with a swivel chair inside instead of a commode. It made for a fine stand. Darin had hunted here the previous morning and shot a wide six-point. That evening I dusted a doe, my first of the season. I was so excited about finally being lined up on venison, I had the shakes. I pulled my eye off the scope and calmed myself before cleanly dropping her in the dirt. Finally. Meat.

We were on our annual trip to Sampson County, NC. The land is primarily agricultural fields in between blocks of hardwoods that’s nigh impenetrable on foot. There are a ton of deer up here, does especially. There are whopper bucks in the area, for sure, but the average mature buck won’t grow to huge proportions. The locals think this may have something to do with their narrow confines, and the antlers grow accordingly.

The rut should have been in full swing, but warm weather had settled in for our trip. Darin’s buck was indeed rutted out, stinky and gaunt on his frame. It was a representative buck of the area, and I was proud he took him. Me? I needed meat and was none too bashful about popping that first doe. After that shot, three smaller bucks came into the field and circled the downed doe. Not a one of them made me think of pulling the trigger.

The rest of the guys were doing well on does. A pair of young bucks were killed in error or inexperience, pick one, by one gentleman in camp. Besides that, some mature nannies were filling the coolers. The mature bucks, though, just weren’t participating.

This is shameless bait hunting up there. Before stand hunting took hold, running dogs was the primary sport. With land sectioned off into leases and smaller parcels for indivudual use combined with the sudden emergence of QDM experts, this has largely ceased. In a few more years of a solid doe harvest, I expect the buck hunting to vastly improve.

Not that I have not seen a few nice ones in the past. A buck two years ago still haunts my dreams. I’ve changed since then. My opportunities at deer – any deer – have thinned out and venison is delight to work with in the kitchen. I’m just not going to let whitetail opportunity pass me by waiting on antler. I’ll get back into that trophy hunting one day, but for now...

Those two smaller does slowly walked across the corn field towards the bait pile. Again, I was trying to make the one grow, but I just couldn’t convince myself she was much over 75-80 pounds. I needed another doe to stand her up against.

I came off the glasses and saw a gray doe enter stage left. Ah ha! That’s the one. A longer nose with bigger ears and rounder belly, she was what I needed to train on. She sauntered up to the sweet potatoes. I stuck my Savage 110 Tactical .300 Win Mag out the venting window and sent a 180 gr. XP3 her way.

About 10 minutes later, in the now fading day, a small six walked up to her sniffing, and otherwise disrespecting her. He was clearly rutted up. His attention wasn’t even broken by the four other full-grown does that had joined the action. Well-versed in the delicate female mindset and insecurities, I pitied these ladies who were blatantly spurned for the Recently Deceased. 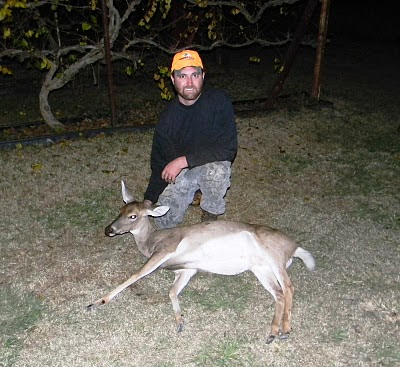 I could have taken a third doe, no sweat, but I was up to two does and this was one of the hotter stands; other hunters needed meat, too. Plus, I held out hope that maybe Ol’ Big Buck would show up.

I nearly soiled myself - Get it? Hunting in a Porta-Potty. Soiled myself. Ha! No, huh? - when a dark shape trotted out of the western treeline and ambled slowly, head down towards the group of feeding deer. My Nikons strained to find antler in the twilight. It turned out to be another little buck.

Nearly total dark now, I left the John. At the base of the ladder, I peeked around and watched the 6 continue to offer his affections to my doe. Sicko. I slipped around through the woods without spooking them and awaited the ATV to haul my deer out.

This land in Sampson County and the friends in camp are a blessing. With 10 hunters, we took 16 deer, not too shabby. It was Buck-Lite this year, but I’m sure in the future this will change. I’m already looking forward to next time.
Posted by Ian Nance at 11/23/2010 03:41:00 PM

Thank you. NC treated us well this year. Hope she does the same for you!!!

Wow! 16 deer - that reminds me of one time my husband and I were at a gas station in Wyoming. A couple of guys pulled up and had the truck bed literally FILLED with antelope. They were all does. I should have taken a picture.

Congrats on your deer!

Is it even legal to take that many antelope? Yikes! Most plpaces in the south have liberal doe harvests. Georgia allows 10! High populations of does is a real challenge down here!!!

Thanks for stopping by!

Great job Ian and my congrats to you on gettin' some venison for the freezer. I'm hoping you're going to share some more recipes with us. It's to you I owe my mad deer cookin' skills to! Thanks again!

PS- I also have to add that it just seems fitting you were on the Porta- Potty stand... I'm sure you know why! lol, j/k ☺

My mad deer cooking skills? You mean me, the Marinade Man? i've stopped just shy of dumping Nesquik Chocolate syrup in with the venison.

There are a lot of reasons I am appropriate for the porta potty stand.