TWL Classics - The One Hitter Buck

The doe bailed out of the woods, skipping through the dog fennels as her six-pointed paramour paced on her heels. Just looking at him you got the sense you could smack him between the brow tines with a 2x4 and he’d shake it off and restart the pursuit of passion.

Ah, love, as much as it can be for deer.

I really wanted a doe for the fridge, but my luck convinced me otherwise. Here I thought I’d missed the best of the rut, and it’s only 2:30 and bucks are chasing. Something great was in the December air, and I fist-pumped a couple of times, just knowing this would be my evening.

A quarter past 3, a larger buck weaved his way through the pines, down a ridge heading towards the creek bottom, nose to the ground searching for a girlfriend. I twisted in the Summit Viper, trying to steady for the hundred yard free-hand shot. All he had to do was hit this one small gap in the underbrush and I could lower the boom on my .300 Win. Mag. 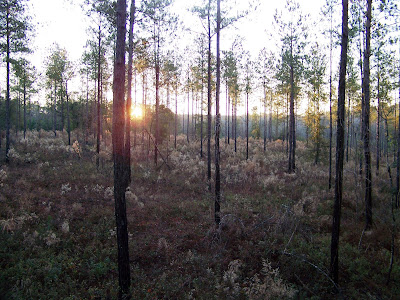 C’mon, boy! Seemed everything about this trip had to transpire within a narrow window – the weather, the moon phase, the rut, the stand location, even the actual shot.

I’d left Lakeland at 7 that morning for my lease, racing up 471 and 75 to Valdosta where I beat it west through Thomasville and a scattering of small towns until I neared the Alabama border. My urgency was not unwarranted. A day-and-a-half later, a frog-choker of a front would settle over and proceed to smother this portion of the South with unending wind and rain. I try to stay positive and realize it’s beyond my control, but even the possibility of foul conditions launches me into a polluted mood.

Even though I’d planned on staying a week and through the storms, by the end of it a full moon would be rising at dusk, and while it may sound beautiful in verse, moonlight through the pines can be rather ugly for the Georgia stand hunter. At least in this part of the state, daylight deer movement nearly ceases as the Man-in-the-Moon watches them feed at night.

And really, diurnal buck activity is not all that high outside of the rut. Sure, every year many hunters get lucky pulling gigantic bucks from the woods in October, but the money time is from around Thanksgiving weekend to the second week of December. On our lease, several guys had already taken nice bucks, or had seen some monsters, but they hit the rut at the peak; I was on the tail-end, hoping their hunting pressure or declining buck libidos hadn’t sank any hopes of filling the cooler.

Luckily, one of my stands hung in a location where deer regularly travel regardless of sexual frenzy, and few people have cared to explore. Or maybe they did, but it’s such a witch trying to get to it they never bothered. I named it the “One Hitter” a few years back after observing the deer that traveled by.

The climber hangs in a dynamite funnel on the southwest side of a ridge rowed with tall pines. To the east is a thicket of smaller pines that serve as a bedding area. Behind me to the west is a creek bottom filled with oaks and small gum trees, and beyond that is another thicket of small planted pines. To the north is the highway, and the south an intersecting, near impenetrable swamp bottom. Deer come from each stand of planted pines and feed on the blackberry bushes, scattered acorns, and whatever else they can find. They also find a false sense of security in the dog fennels that grow shoulder high on me.

By running my stand 25-30 feet up a pine, I can see down into the fennels, but since the ridge is so high, I’m eyeball to eyeball with anything coming from the east. Neat area.

But – and this is the big “but” – with all those dog fennels and thorny blackberry bushes, it’s impossible to get in and out and not make a ton of noise. Next, with all that vegetation grabbing at you, your scent is well-marked.

It took me a while to figure this out. The first time I sat here I saw a ton of deer, then next time, none. I was confused until one day I spied a doe coming down off the ridge. She crossed my trail and began smelling the dog fennels, tossing her head in the air to check for airborne scent, before finally blowing and running off. She was 150 yards away. And upwind. Then I knew that no matter what kind of scent protection I use – and yes, I have the suits, the cover up, and all those fancy tricks – this stand could be burned up in a hurry. So, I restricted myself to hunting it once a trip, and only on days I thought would be the best.

And that’s worked fine. Taken a few does and a solid 7pt over the years, but I knew a big buck worked that area. People had reported seeing a 150-class ten on several occasions near here; with all the trails between the two pine thickets and the corresponding doe traffic it’d only be a matter of time.

This would be the first time I’d hunted “One Hitter” this year, and I’d like to tell you this buck was the beast, but he wasn’t. At first glance I knew he was a decent buck, but no monster. More important to me than antlers though, is when a plan comes together, especially as forces beyond your control battle against you. I’d saved this stand for just this trip and broke many speeding laws to ensure I’d be sitting here in time for this guy to pass by. With weather and moon limiting future opportunities, the crosshairs followed the buck down the ridge until he paused in a thin gap between two pines.

The buck did not move at the first crack of the rifle. Confused I’d missed on what felt like an excellent shot, I re-chambered and sent another .30 cal. his direction. This time he popped up in the air and ran to the creek bottom, calling it quits under a large gum. Both shots were an inch apart behind the shoulder, the first killing him before he knew he was dead. If a 2x4 won’t cure love sickness, a .300 sure will. 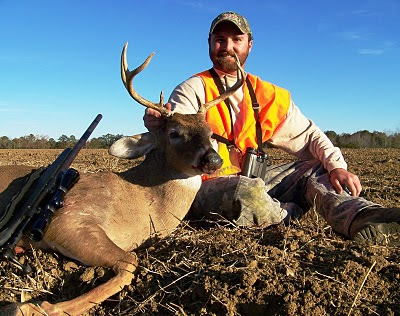 Just a hair under 15 inches wide, his 140 pounds held gaunt on his large frame, no doubt from spending the last few weeks speed dating. He’s not the biggest buck in the woods by any means, but I was right proud to have him.

This whole hunt ended in 30 minutes – after all that hurry, I still had a couple of hours of daylight left. Some may have stayed in the stand, but I know how rare it is to get a win like this. I hauled him back to camp to snap pictures as the waxing moon rose in the east.

As I was about to leave the local game processor, the man cleaning deer asked, “You headin’ back out to the stand?”

“No, sir, I think I’m just gonna pour a toddy, count my blessings, and enjoy the rest of the evening; it’s been a long day.”

“Well, it’ll be raining the next few days”.