Bowhunting and I have had a stormy relationship over the last decade. There’s been name-calling and threats and throwing things. Abandonment on both sides. Even today, it knows I’d leave it in a second for Full Season Rifle Hunting, and there has been casual to serious flirting with purchasing a crossbow as that season expands. We don’t have the most stable foundation.

Still, bow season is a great time to be in the woods, and I need that companionship. Things have settled down to a degree where we’ve learned to work together, but, man, I just couldn’t help but rehash the old days as we sat in the stand a couple weeks ago and whittled the hours thinking through the What-Could-Have-Beens.

1. In 1999, I perched in a lock-on in Manatee County on a rather coolish October morning. I was fresh to this archery game, but the rubs and nice weather had me jacked up. About an hour into the sit, I pulled out my grunt call and gave it a few notes. From the swamp bottom, a six-point came rushing up to the stand and stood broadside 25 yards away.

Now, this was a young deer, but I was a young hunter. His close proximity and 30 inches of antler disturbed the Shakes within. Still, I rose carefully and clipped the release onto the string, ready to send my first broadhead into a buck.

This release was one of those palm deals that would be totally suitable for a bow that shoots arrows with plastic suction cups but not ideal for the real thing. Despite the fact it had performed flawlessly through hours of practice, as I came to half-draw the 65 pound pull caused the mechanism in the release to fail. The string snapped forward limply flying the arrow about as far as a three year old can toss a baseball, and my hand flew back into my lips, instantly fattening them.

If only deer could laugh. But as I said, this was a young deer, and I was a young hunter. The buck paced in a circle and again stood broadside. I re-nocked another arrow thinking, "There’s no way this would happen twice."

Angelina Jolie does not have as pouty lips as I did after that morning.

2. A couple years later I sat in an old wooden ladder stand guarding a corn feeder and watched a hive of yellow jackets fly in and out of a palmetto clump, no doubt plotting a vicious attack on some poor creature. A doe slipped out of the gallberries behind me and fed in front of my stand. I had no bowhunting mentor and had to learn by trial and error and error. I shifted in the seat ever so slowly and drew back on the doe.

When I hit the release, the arrow tumbled through the air not unlike Darth Vader’s ship at the end of the original Star Wars. The doe hauled tail as I wondered what the hell had happened. Then I noticed my string had come completely off the wheel and cam. When I shot, the bottom limb had been resting against the wooden rail. The force of the shot unspooled and snapped the bowstring.

I know not to let that happen again. To make matters worse, as I sat there with no functioning weapon, a herd of meat hogs arrived at the feeder.

3. Speaking of hogs. I had fashioned a ground blind out of palmettos and old logs in a scrub hammock. I grunted in a nice 8pt my first sit. As they tend to do, this buck showed up on the one weak side in my concealment and busted me immediately. Hoping for redemption, I patched the problem and returned that night, but as we all know, Second Chances are few and far between.

As dark came to the hammock, I elected to slip out to a feeder on the edge of a large palmetto flat hoping to stick a hog. When I arrived at the feeder, no hogs were to be seen, and I desperately needed to answer the Call of Number 1.

So I sat the bow down and unzipped because, you know, peeing where you are trying to attract game is always a professional idea. I had gotten down to the last drop when I heard an oink behind me. All of a sudden I had a herd of 30-60 pound porkers literally feeding within a few feet. 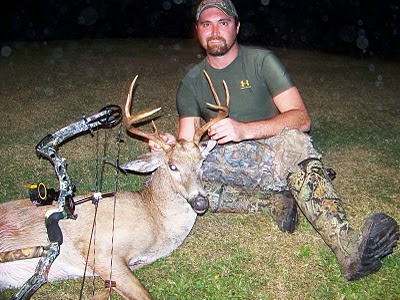 There I stood exposed, bow on the ground, The Great White Hunter. When I stooped to reach my bow, they alerted and slowly trotted back to the palmetto flat. I zipped up and hurried to catch them. When I hit a fire trail that circled the hammock, a large boar was wandering his way to the feeder.

He turned broadside, just inviting that perfect shot. I sailed the arrow a foot over his back and cursed my way back to the truck debating whether I should tell others about this story.

4. I had this buck dead to rights. He had just enormous rubs near my stand. I was cautious about entering this area on anything less than the right moment. But, I did hang a film canister filled with cotton on a small pine tree that I’d occasionally touch up with store-bought doe urine.

You know it’s a nice buck when the first thing you notice is the horns. Dark chocolate, like so many swamp bucks in the area. Nine points outside the ears. He had followed the doe's trail right in front of my stand, and when he walked behind a palmetto patch, I drew.

The buck stopped to sniff my film canister. A lot of things went wrong. One, my bow at that time – which came across on the Mayflower – had no let-off and my arms were fatiguing. Two, I never stood to get a solid anchor point and my body was torqued. Three, I didn’t follow through on the shot, lifting my head to see the arrow fly high and right into the meaty part of his neck. I should have just lowered the bow.

The buck bounded away, and I waited an hour before getting down. I found the broken aluminum shaft a few yards into the woods where he ran, no more than 3 inches severed from the broadhead. I located the blood trail and realized if I didn’t find him fast, I wouldn’t. A shot like that either hits blood or air. Anything else is about a lost cause.

My tracking job ended well past dark, caught in a tangle of thick swamp vegetation with no more blood to find, and what sounded like a pretty riled up pack of hogs that would be at eye-level as I crawled through that mess.

I was so sick and disappointed in myself. I came close to killing my bowhunting relationship for good that evening. The experience still haunts me every time I pick up archery tackle.

5. There stood the biggest buck I had laid eyes on in the woods, up to that point. He slithered out of the pines behind me. This was a truly large Florida buck, golden antlers from rubbing pines, ten points, at least 17 inches wide, massive - every bit a wallhanger. You’d have to be a much more dedicated hunter than I to let this guy walk.

He appeared ragged and tired from a night of chasing does and was in no big rush. A friend had invited me to his family’s ranch and strict rules were in place about the size of bucks one could take. This guy met the standards, for sure.

The buck turned away from me to cross a small creek and walk out towards an open wet-weather pond. I took the opportunity to stand and get ready. But, he only offered me the rump shot until he meandered to a myrtle bush and stood broadside, surveying his land.

The shot might have been 50 yards; it may have been 35, but I never drew the bow. Two weeks prior I had sent that arrow into the neck of the aforementioned buck, and I just could not harness the confidence. I know they say you have to Cowboy Up and get back on the horse when the iron is hot and the tough get going, but I watched that trophy buck stand there for an interminable length of time until he moseyed into the swamp and out of my life forever.

I can’t say if I did the right thing or not. Hopefully a deserving hunter did finally tag him. I never heard.

Like all relationships, one must learn from their mistakes, how to compromise, and how to move past it all to become better.

I've been bow hunting for a few months now and quickly building some top 5 moments. Starting with trying to take my first ever shot at a modest 50 yards(unsuccessfully). I have a feeling I will have an interesting bow relationship myself.

You've got the fever bad.

What a great post Ian. I think this one is my all time favorite as I can relate to those "live and learn" situations!

Thanks, Kari. I know you have not made such mistakes!!!

This is my second year bowhunting and just got home from a weekend that I can definitely add to a similar top 5 list. I am not feeling too hot on bowhunting deer right now but reading this makes me feel slightly better knowing I'm not the only one who had made some heartbreaking mistakes. Thanks for sharing, good story.

This is my second year bowhunting and I just got home from a weekend I could add to a similar top 5 list. I am not feeling too hot on bowhunting deer right now but it made me feel slightly better reading this knowing I'm not the only one who has made some heartbreaking mistakes. Thanks for sharing, good story.

Learning from bad things makes a better hunter and person....don"t give up