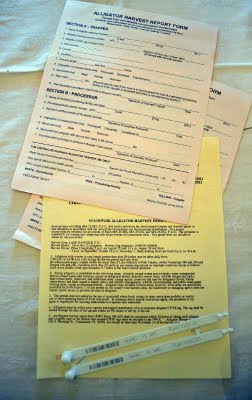 This week I will be taking delivery on a new harpoon from Central Florida Trophy Hunts. Their combo package includes a stainless steel base, driver, two Muzzy harpoon points, 100 feet of rope and two Styrofoam buoys. For 120 bucks plus shipping, it ain’t too bad. Just gonna have to run to ACE to get a dowel to mount it on. Shy of a boat, this will complete my crusade for gator hunting gear. But once you have all the gear, boats are easy to come by.

For those of you raised on Swamp People who believe gator hunting is as easy as shooting a gator in the head with a .22 while it chokes on a hooked chicken thigh, know Florida does not allow the use of firearms. Nor baited hooks – baited pegs, yes.

To wit, there are numerous tactics hunters use to land gators, most of which are dependent on the elements of the Happy Hunting Grounds. Some folks, especially those who hunt shallow, weedy areas, prefer a run-and-gun style. They spotlight red eyes and floor it to that location and try to spear or arrow the gator. Or track their bubbles and pitch snatch lines provided the vegetation isn't so thick that it hangs hooks.

For some who hunt large rivers and open waters, using baited lines to chum gators is their preferred tactic. They are not allowed to set lines from shore – and catch those “Tree Shakers.” Baited lines must be hand-held or secured to a boat. Plus, no hooks may be used; only 2-inch wooden pegs wedged into the bait and thrown in the vicinity of a gator or in a likely location. Common baits are beef lung and rotten chicken and are pretty repulsive. The gator swallows the bait and the Tug-O-War begins until it is hit with snatch hooks or harpoons.

Still others take the silent approach, spotlighting gators from a distance and stalking within range with minimal light and by paddle or trolling motor. If the gator sounds, an anchor is eased over. Most times the gator will not travel far. When the gator is sighted again within range, the snatch line is cast over the beast and the fight is on. Hunters must be quiet not to kick equipment and beer cans around the vessel as this noise easily spooks the gators.

I cannot speak much more than this about baits and harpooning and bows and arrows; I’ve never tried these methods. We’ve relied on this final model, and it is the equipment needed for this that I would like to discuss.

Let’s start with lights. Q-Beams are near-essential tools for the gator hunter to spot game at long distances. Not surprisingly, different hunters disagree on how much a spotlight should be used; some feel if you keep it in their eyes, it keeps a lizard from submerging. Others feel you should douse the light and sneak in the dark. I agree with the latter camp only because I’ve not witnessed an effective execution of the former strategy.

But, you must still see where you are throwing. We use low wattage headlamps. It can be difficult for others in the boat to see the game, but for the person wearing the lamp about to cast a line, the light is just enough to shine those eyes.

Which brings us to the pitch rods. Last year Harris introduced a new strategy. On previous hunts with him, he used two stout rods with large treble hooks. The muscle was there, but the casting range was limited and inaccurate. Plus, large three-pointed hooks slinging out of the boat made everyone a little antsy. So, last year he decided to bring a smaller rod with lighter line that cast farther. We were hunting open water, more or less, so we could quickly maneuver close to put more lines in him without much fear of the gator breaking us off. Worked twice in the night. 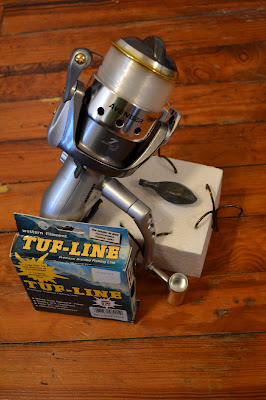 Dad visited Bridgemaster Fishing Products in Lake Wales to find a gator set-up for my birthday. On the advice of a seasoned hunter, he bought a 7-foot E-Class Roddy Gator Tail with an Okuma Avenger and 150 yards of 80lb. Tuf-Line. The gentleman also recommended rigging a line with three treble hooks and a weight on the end. Previously we had just used a weighted hook, but I can see the benefits of adding a couple more. (I do fear my knot-tying skills for this operation. I’m usually surprised when I tie my shoe and don’t have a finger wrapped in the bow. It's why I wear sandals.) After a gator has been hooked, we try to put another line in him. It's important that people work together because lines will tangle and snap in the frenzy.

Once you’ve spotted a gator and put a line or three in him, the next step is the harpoon. Gators roll up and down lines like yo-yos when boat side. That harpoon line is insurance and makes the situation more manageable. The one I’ve purchased – and there are numerous companies that sell them – is a straightforward design. A harpoon tip is rigged to rope and a float. This is then placed on a driver. The hunter leans into a strong jab to get under that tough hide. The tip comes off the pole and the floats are free to go overboard if the gator takes off. Now comes the dangerous part - getting the gator boatside and subdued.

I’ve written about my bangstick before, so I won’t repeat myself today. The goal is to send the slug in a spot directly between the eyes and two to three inches behind and angled towards the brain for a humane kill. It must only be used when the gator is a few inches below the water and only when the gator is secured to a restraining line as described above. 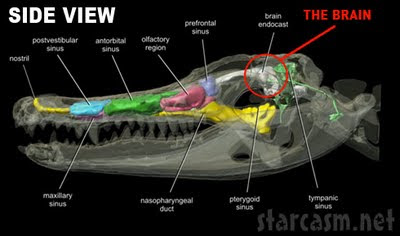 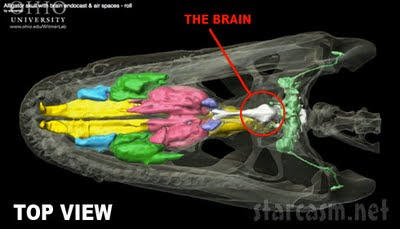 This typically knocks the wind from their sails, but gators are dangerous critters with small brains. It’s prudent to wrap their snouts - very carefully - with electrical or duct tape. Then, sever the spine behind the skull. Their eyes should shut after giving up the ghost.

As I noted earlier, this is the basic manner in which I have gator hunted. And I will confess, I've never personally dealt with a true dinosaur. How each captain or guide or hunter performs is dependent on their experience, and I welcome any advice should one want to share it. Gator hunting, for us, has been a team sport and very enjoyable as long as everyone is on the same page.

One last thought if you’re the captain of the vessel. Make sure you have all your running lights, throw cushions, flares, and life jackets on board. The Man is relentless. A trapper’s agent license is required of all those who aid in the capture of a gator and can be purchased online and at the local Wal-Mart or sporting goods store.

Had a great time at the Gator Expo at Camp Holly last weekend there on Hwy 192 W. of Melbourne... Lots of good gator hunting hardware... Evidently they will have a bigger event next year at the nearby Platt ranch...

Why is FL so bass-ackwards when it comes to hunting some creatures? No hooks for a gator? You can't hunt nuisance animals at night. It seems like the state pretends to show interest in maintaining population levels (as in the gator) or in eradication of a feral, nuisance species, but doesn't really want the hunters to actually be able to effectively take care of the issue at hand. It's so irritating.

Its matter of how keen your eyes are and how active your ears are..Just be careful and make your Hunting Gear all set!

Check out alligatorhuntingequipment.com they have great stuff.