Two years ago I started my volunteer outdoor writing service through a local newspaper's public blogging site. Unfortunately, through powers beyond my control, my archives from that source are gone and lost forever. Luckily, I saved rough drafts of this work on my computer, and once in a while I'll re-introduce a past column back into the wild of the World Wide Web. Enjoy!

Floating on the water, drake wood ducks resemble shiny toys. Or maybe Christmas ornaments. Either way, they are handsome, tropical-looking birds that I almost, almost hate pulling the trigger on. Unfortunately for them, they are serious-good to eat and a great deal more fun to hunt!

I’ve sometimes wondered why they bothered domesticating the mallard or Muscovy when this treasure of a bird would make every child’s Easter basket special. And then I remember what all I go through to put a duck or two in hand – these birds were never meant to be tamed. Where they live is too wild. Wooly river swamps, booger bottoms, small ponds, lakes and ditches – heck, as fledglings they enter the world by leaping from treehole nests and splat into the water below.

No, these birds can’t be broken, at least not without help from a solid hunting plan and a salvo of #4’s

On my lease in Georgia I have two places to shoot woodies. One is a beaver pond where the birds arrive early in the morning to assemble and feed in the shallow water. Here, I construct a small blind from branches and small saplings, cut courtesy of that buck-tooth rodent.

Not too long after first light I hear them whistling in flight, and make it rain as they pitch down to the water. Timed correctly, the whole hunt is over in maybe ten minutes. It's fun, but often I’m back in camp cooking eggs and bacon wondering why I didn’t spend the morning deer hunting.

The second place is a bit more exciting to hunt as I jump-shoot the ducks and can do it after the a.m. deer sit.

A lease member showed me the site. Essentially a hole in the middle of planted pines and thick swamp, he had originally scouted it for deer – and indeed the scrapes in here were mythical – but found it too tight for a blind, stand, or anything else. But I did jump woodies off a small creek - my grandfather would call it a “crik” - each time I went to explore. And the wheels got to turnin’. By creeping from the road through the pines, I could peer down at the crik, charge forward ten yards, and flush the birds. Even without waders, I’d have no problem retrieving my bag in the narrow waterway.

My first attempt last year was a success. I pummeled a beautiful drake that’s still at the taxidermist – looks like he was scared from the sky without a noticeable mark or ruffled feather. I simply took a branch and pulled him from the water and that was that.

This year I was again determined to utilize this tactic after deer hunting. So the plan was hatched. Hunt deer until ten, then slip down to the hole, bust my limit and be back in time for lunch.

Well, the deer didn’t cooperate, but the ducks sure did. I slowly stalked through the pines up to the edge of the hole armed with my do-anything Mossberg pump. Didn’t see them immediately, but as I glanced to my right, I caught just the smallest ripple, then movement – a drake. The ducks, at least twenty of them, were a few yards downstream, brush screening them from a charge-and-shot.

I snaked back into the pines to circle their position. I crept within 20 yards and relocated the flock. Still not presented with a clear shot if they flushed, I crouched and willed them to paddle my way to a small opening ahead.

Over the years, I’ve waited out many heads of game holding for that perfect shot, but I chuckled that I’d put this much effort into three ducks. The woodies fed in the grasses, effortlessly blowing about like leaves on the water.

Finally, they blew my way.

All at once I lunged up and shouldered the scattergun as the ducks scrambled to the sky. The first shot caught a drake, and a hen dumped with the second. My third was a vain attempt at a fleeing male, who circled around with his buddies and put as much distance between us as possible.

After everything calmed down and I assessed the situation, I let out that groan Bucs fans make when a routine third-and-inches play becomes third-and-ten thanks to a holding penalty – the duo dropped too far out into the crik to snag with any available branch. I tried to find a dry route to retrieve them, but to no avail.

Forget it. I pulled my boots off and waded up to my crotch into the cold creek, clinging to a slimy, fallen gum tree trunk, straining to reach my prizes, hoping that Georgia swamp bottom wouldn’t swallow me alive with no sign of me ever again, save my keys, wallet, and pump gun sitting on the bank. But I got them. Totally worth it. 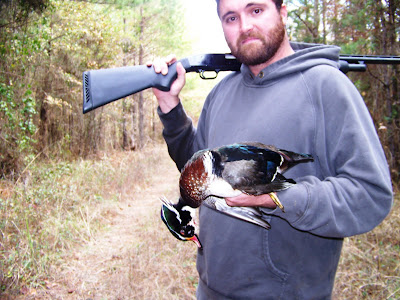 Next time you get a chance, check out your own piece of property to see if there’s a little ducky hidey-hole somewhere, and give the jump-shoot a shot. Just remember to bring your waders.