The doe’s ribs stuck out and her back swayed, resembling a forgotten pasture mare with a similar nonchalance about her surroundings when it’s feedin’ time. Old doe. Trophy doe. I gave her the taxidermy thought, in fact. She had wandered out of the swamp bottom behind me - like I’d planned when I hung the lock-on - with a younger, though certainly mature, doe, possibly one of her numerous progeny from years of dwelling these woods. I know I’d seen this animal before in my days of hunting this hammock.

I wasn’t in position for a shot. As I said, I had counted on deer emerging from behind and wandering past my stand on both sides to feed on acorns. It was the classic transition zone set-up. A funnel of trails led into the swamp at my back. In front was a string of oaks that lined a sea of palmettos and gallberries.

When I hung the stand, I had to decide whether I should point my arrows at the convergence of trails and turn my back to the oaks, or face the food.

Food. Besides, they are coming out of that swamp to feed, and that wasn’t exactly the only pathway to the groceries - would hate to miss the forest for the trees, so to speak. I positioned the stand at such an angle that a clearing in the oaks would sit offset left allowing an easy shot, but I also had a shooting lane behind me.

It was a solid plan that was just about to pay off. Unfortunately, the younger doe was nervous, catching my scent or alerting another sense that triggered uneasiness about that Saturday morning.

Swamps breathe. You don’t notice it a whole lot sitting on the inside, but this phenomenon is palpable on the perimeters. Evaporating moisture rolls in and out even without a breeze. Perhaps it’d mixed with my stink and sank to the forest floor and put the deer on guard.

The old nag didn’t appear to take note. She’d occasionally check back on her unsteady friend, but fed closer until she was directly beneath my stand. All I needed was a distraction for the other doe so I could lift my bow and stand for the anchor shot when she passed by. Just give me a diversion.

The turkeys obliged. The first fly-down cackle re-directed the second doe’s attention, and it held as the flock descended into the hammock. I carefully rose from my perch even though any mud clinging to my boot soles could have shaken loose on the foot grating and pelt the old lady in the head.

My target put her head back to the chow and began to feed away from the tree, circling to the first opening I had to fling an arrow through.

I’m sure you’ve willed a deer to do what you want:

I broke concentration about the same time the doe did. A staccato hiss was emanating from in front of us. A gobbler had flown down unnoticed and was strutting in the middle of the hammock, spitting and drumming like his rites of Spring.

He was a ratty bird with his middle four or five tail feathers missing. His beard was about as thin and wispy as a moustache on a fifteen year old. He strutted in a circle, puffing up and spitting every second or two and creating quite the scene. The tom’s actions put the young doe off her feed. Already unsure of things, she trotted back into the swamp with haste, probably as confused by the gobbler as I was. The old doe took notice and slowly retreated, never offering a shot, and disappeared into the vegetation. 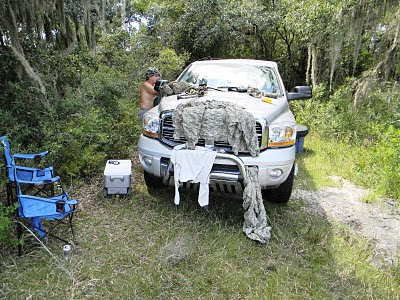 Such is life. That was my only action over the weekend. The biologist at Duette told me Sunday morning when I left that the deer were feeding at night, and only one doe had been brought to the cleaning station, atypical for this place. Dad saw a bunch of hogs and turkey, and I heard some swine. The weather was gorgeous for early Bow Season – 65 degrees Sunday morning. I would have guessed at a spectacular morning of antlers.