I’ve never held alligators in high esteem. For one, I’m a native Floridian who’s been around them my whole life and know better than to go swimming in infested lakes after dusk, and who doesn’t troll my dog on a leash up and down South Florida canals. Such are the common characteristics of the Alligator Attack.

It was ingrained at a young age. Growing up ashore the Stink Pit on the west side of Banana Lake, gators sightings were nothing unusual. “They can scoot faster than a quarter horse over short distances - run in a zig-zag pattern if one chases you," the folks used to say. Of course, this was also the point in my life my father told me he’d windsurfed around the globe. Never could – and still can’t – get a good bead on the jive those two sold me. So, my sister and I merrily launched tangerines and oranges at reptiles swimming on the surface of the pit, faces lighting up when they’d stop to chomp at the citrus missiles.

I carried this nonchalance with me through college. The University of Florida owns Lake Wahlburg. Students sporting a Gator One ID card could use the facility’s kayaks, canoes, and paddle boats free of charge. Wahlburg teems with gators. We’d borrow kayaks and stroke it to the far reaches of the lake, getting as close as we could to the beasts. Sober. One of the few things we did for thrills in our time there that didn’t involve beer.

Even today when someone asks me where they can spot a gator, my crass response is to pee in a parking lot, wait 20 minutes, and one will show. I don’t know, but for some reason gators don’t unscrew me quite like, say, sharks. I’ve always endured under the theory if you leave them alone, they’ll do likewise.

Which got me wondering why I’d upset this status quo by applying for a Florida gator license. My indifference for them notwithstanding, I still recognize they are large, powerful critters that, oh yeah, can rip your arm off if you’re not careful. Three men in a boat with 800lbs. of twisting, snapping lizard on the end of a fishing line sounds like a delicate proposition.

Mom has always pleaded with me not to hunt things that can bite back. Little does she know, first chance provided, my plane ticket is stamped for Kodiak Island, followed as financially able as possible to wherever they kill a lot of leopard. And besides, I remind her, wild boars are dangerous if you’re not careful.

A few weeks after learning I’d drawn my tag, a license and packet from the FWC arrived. I imagine, in terms of thickness, the manual for adopting a child is smaller. In this manual is the history of the alligator hunting program, rules and regulations, equipment and harvest strategies, names of number for meat and hide processors, and a handful of other things. Then you arrive at the section titled, Alligator Bites and Infections. A couple pictures of dismembered arms, hands, and grave warnings about bacterial infections stemming from bite wounds have a way of grabbing your attention.

Not that I am worried; I’m hunting with an experienced and competent crew - for the most part. I do find the manner of harvest rather crude. You can either snatch them with a treble hook on a stout stand-up rig and terminal tackle. Harpoon them, Ahab, or pop them with archery gear tied to floats and ropes and whatnot. Honestly, the ropes could be the most dangerous part of this whole gig. I don’t know what manner of twine is traditionally used for gator hunting, but your average dock line has a habit of uncoiling, knotting, and wrapping around things on its own volition. Secure an angry gator to one and see what gets yanked over.

The easy answer is to shoot the gator from afar. As a matter of public policy though, this isn’t possible. Let’s imagine Lake Generic for a moment under this scenario - half dozen rifles, their aim fueled by varying BAC’s, after dark, blasting at glowing red eyes. Severed arms and free-willed rope would be the least of my concerns. 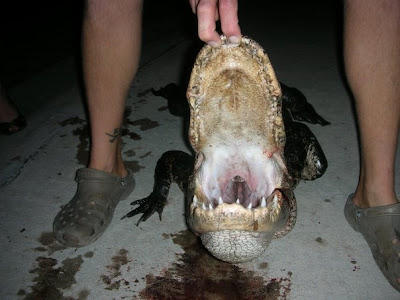 Still, I’m excited. Something primitive certainly resides in all those who go chasing gator tail. Given my druthers I’d tote along my .300 and start sharpening my knives. As it is, we have to go all native, wrestle a leviathan to the boat and level a bangstick between his temples.

After having trouble flagging down help with the FWC, I was put in touch with Jeff McGrady who was very helpful, and very familiar with the alligator hunt program. Tiger Lake, Lake Livingston, Lake Buffum were a few of the public waters we discussed. Ask for him at the FWC office in Lakeland (863 648-3200); he should be able to aid you from there.
Posted by Ian Nance at 6/09/2010 07:47:00 PM