The scallops were thick last weekend. The boats were out in droves, also. Based on the Homosassa area, I’d say Governor Crist’s Early Scallop Season was a success.

With the oil panic and its effect on Florida’s tourism, Crist opened scallop season June 19th to encourage folks to visit the coasts where scalloping is permitted. The people responded. And it worked for me, too. I was gonna miss the opener while away on my honeymoon.

As for the scallops, depending who the captain is, you’ll look for different environments on which to focus your clamming efforts. Some seek white sandy patches. Others love searching the thicker turtle grass. Deep water, shallow water…really, if the scallops are there, it doesn’t matter. 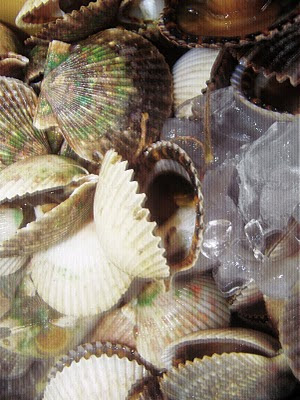 Our first stop, ¾ mile north of Marker 10 at the mouth of the Homosassa River, was productive. I was pulling up three and four at a time - quick action compared to the dregs of last year. We lifted anchor and ran farther north to dodge a rain shower. This was the honey hole.

The swift outgoing tide had attracted the scallops to the top of the seagrass to filter feed. I had a confirmed 7 Grabber on one dive. Other times, I couldn’t put them in my catch bag fast enough. My bag was weighing straight down despite the current.

None of the scallops were big. It seems that extra month helps them put on the size. I tucked a few of the very small ones back under cover lest some derelict add it to their bag. As always, it’s such a pleasure to snorkel these crystal clear waters. Swam up on a striped burrfish and the usual selection of porgy and grunts.

After we sufficiently vacuumed up this honey hole, we made one more stop and did well. The total stats – 1 hour, five people, 8 gallons. We probably could have secured our last two gallons, but with the current pulling like it was and the inevitable rush back into the river, we decided to bail early.

Despite the small size of the scallops’ shells, the meat inside was plump for bay scallops. Cleaning them, as usual, was a messy deal of shop-vacs and bourbon, but cooked that night in a skillet with olive oil, lemon juice, and Everglades Seasoning, it was all worth it.

The Florida Scallop season September 10th. The scallops are plentiful, the Nature Coast economy would appreciate your patronage, and you’ll enjoy this simple outdoors pleasure.

Hi Ian,
Sounds like you had a good day, had my first taste of scallops just the other week, shop bought n frozen (I know, I know no need for comments) but even these tasted good, to try fresh caught like yours must be heaven, one day maybe I'll get round to catching my own, one day.
Regards,
John

That sounds like fun! Outside of fish I've never found my own sea food. Hmmm, I may have to add another to my bucket list...