The Trouble with Black Guns

I remember exactly where I was when I read about Outdoor Life giving long-time hunting editor Jim Zumbo the heave-ho. It was in the basement of my aunt and uncle’s home in Westerville, Ohio, February 2007. Outside a flock of hens fed along the little creek, frozen over and surrounded by the crunchy late-winter snow. The chills, however, came more from what I was reading about Mr. Zumbo’s dismissal than Jack Frost’s shenanigans.

His offense? Mr. Zumbo disparaged the use of AR-style weapons. Here are his OL blog comments as they appeared in an article from the Washington Post:

“Excuse me, maybe I'm a traditionalist, but I see no place for these weapons among our hunting fraternity. As hunters, we don't need to be lumped into the group of people who terrorize the world with them. . . I'll go so far as to call them 'terrorist' rifles."

Look, Zumbo was definitely in the wrong and definitely ignorant. Gun owners and hunters have enough image problems without one in the ranks casting dispersions. Yet, I couldn’t escape the irony of how fast he was turned on. Here’s a guy who championed gun rights for years. Also, he’s one of the most knowledgeable hunters I’d ever read. And here is Outdoor Life, the NRA, and numerous other organizations that so fervently support the 2nd Amendment hack down his right to the 1st. I understand OL needed to protect their business. I also thoroughly understand that calling these guns “terrorist rifles” – or to that point, the more common term, “assault rifle” – is, what’s the phrase, stupid.

Not to spend too much more time on this, but I think he got the hook a little quick. I do wish he had been granted some forgiveness and time to rehab his opinion. I miss his eloquent writing, especially on elk hunting, his forte.

Really, it is the three years since this occurred that I want to discuss. In this time, numerous sources are pushing hard to introduce AR-style firearms into the woods, so much so it seems like the Powers That Be are still fighting Mr. Zumbo’s comments. 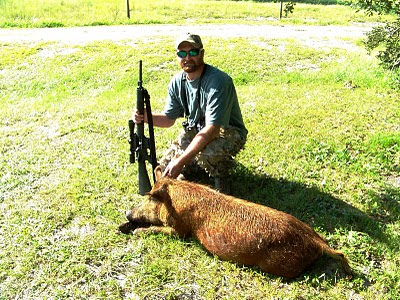 Quite honestly, there’s nothing more practical or groundbreaking in their use. The bullet still fires out the same way, and the first shot always counts. I do find them a tad unwieldy in a treestand.

This is not to say there aren’t some benefits. They are gracefully easy to shoot with low recoil, though a little tough on the unprotected ear drum. And now they come in a wide variety of calibers manufactured by a healthy list of companies.

But let’s not be so foolish as to not think the reaction of people, even hunters, is different than if I’d toted into camp my heavy-barreled Savage, which, incidentally enough, is often dubbed my “sniper rifle” when I have a bipod attached. I’ve gotten the Rambo comments. The machine gun comments. Some people just want to hold the thing, but yeah, there’s a stigma to it.

The outdoor industry has jumped at this opportunity to correct people’s opinion. The November 2009 issue of, you guessed it, Outdoor Life is a good example. After page 64 is a four-page advertisement from the National Shooting Sports Foundation promoting the “Evolution of the American Hunting Rifle.” Here we can see the lineage of military rifles from WWI and beyond deployed in the deer woods, with our friend the M-16/AR-15 as the sexy centerfold. In the July 2010 edition of Guns & Ammo, Wayne van Swoll pens the “ugly-as-sin-but-I-like-them” angle. I wonder if this was a test of allegiance for him.

He’s not the only one. In the May/June copy of Petersen’s Hunting, Mike Schoby runs the similar curve but with the added claim that “they can be hell on big game.” Then you flip back through the previous stories of reindeer, coyote, and African hunts and spy nary an Armalite.

The TV programs are even better. They remind me of the lady who peddles the cooker that, in ten minutes, will prepare a perfect steak and baked potato as the audience gasps in amazement. From the outdoor shows, you’d think the AR-15 could not only be used to harvest game, but will skin and ice it, too. Gosh, just having one nestled in your hands is enough to prompt ol’ Big Buck to emerge from the woods, hooves in the air to surrender his fate.

For me, the whole deal is a tad pushy – we get it, they’ll kill a deer, coyote, polar bear, and tyrannosaur, but that’s the cartridge more than the gun. I will applaud NSSF, NRA, and whoever else for educating fellow gun owners on the use of AR-15’s in the field. Lord knows we need someone fighting the PR battle. But, this style of gun, and others like SKS’s and AK-47 variants, have been used for years and years. Just check out the Green Swamp WMA during general gun season if you need proof.

Maybe the issue is these guns aren’t selling like people think they should and this is a marketing strategy. The industry of advertising is too apparent. They are generally more expensive than your standard bolt action. Heck, the whole reason those old military arms were so popular was because of their cheap price. They were surplus firearms, not redesigns like manufacturers are doing with Stoner’s rifle.

Still, in my cynical little mind I wonder, too, if there’s a bit of agenda at work here, rooting the concept of military semi-autos into the hearts and hands of sportsmen as a “looky-here” defense for when, inevitably, President Obama or other like minds push for a new round of gun control legislation on such firearms. Really, that’s not a bad idea.

For hunting, they do, and will, have their place. Schoby does present a fine point at the end of his article that represents the freedom of hunting and gun ownership:

"The hunter's world has never been all or nothing - there is a time and place for all types of rifles afield. Some days I may grab an old lever gun or I may reach for an AR - I'll let the hunt and my mood decide."

As for Zumbo, I find it a real tragedy. I wish he’d been given a better chance to redefine the nature of his association with these guns. I mean, he was a paid outdoor writer who went on sponsored hunts all the time. Hand him an AR-15 rifle, find a herd of hogs, and tell him to get busy.

I’m gonna keep on hunting with my AR-15 when I feel like it and defend others’ rights to do likewise. They are fine, reliable firearms that have plenty of utility in the field.
Posted by Ian Nance at 6/16/2010 04:15:00 PM

I have to admit, when I first saw the AR rifles making an appearance in the hunting world, I didn't like the idea. It is hard to shake the stigma that they are automatic weapons used for war - which means killing people, of course.

And I guess I still have a preference for guns with wood stocks. Throw some engraving in there, and I'll call it a piece of art.

But - I spent a few years in Army and while on training exercises in the mountains of California had deer and hogs in the sights of my weapon on many occasions. And knowing their effective range back then, if I had the tags, I would have hunted with it.

I guess I could have made this comment a bit shorter by saying "If it works for you, shoot it!"

I certainly prefer bolt actions...but they are fun to hunt with from time to time

Ian-
Hi! I found your blog through Mairan's. I hope you are doing well! I really enjoy the way your write. I am your newest follower. Hope you will make your way to my blog.