The Trouble with Spikes and Culls I

Harvesting a spike buck remains one of the most controversial topics around campfire - and otherwise uncivil - deer management discussions. Most people accept shooting does as a responsible practice, and hunters on trophy leases tend to agree on an 8pt minimum for bucks.

But spikes are different. Hunters as a group have difficulty coming to agreement on when or if they should be culled from the herd. Some hunters believe every one of them should be removed to prevent the spread of genetic inferiority throughout the population. Others characterize all spikes as being young (the devil horned deer) or all spikes as being old, having seen their better days antler-wise (the cowhorn). Each argument can be backed by a large number of scientific or pseudo-scientific reports easily accessible on the Internet.

What do I think? I think there is probably a little of truth in all of these theories. I’ve seen a couple legitimately ancient bucks with little spikes, and seen very young deer taken by hunters who rationalize that their horns will never get any better. If I had to lean to one side, I think many hunters shoot spikes under this latter category of thought.

The trick is telling the difference between the two; however, how can the average hunter correctly age these bucks? I get a kick out of some of these hunting TV shows or magazine articles that stiffly look down on hunters who shoot deer under the magical 5 ½ year old mark. I’m sure it is easier for guys who hunt manicured food plots in wide open Illinois and Iowa, or Loaded With Bucks, Texas, to have the time and numerous opportunities to discern an older deer from a younger one. Someone hunting a property where visibility is measured in tens of yards, not hundreds, and may only see a couple deer a year is not likely to have this time. And in fact, if that hunter spends precious seconds trying to determine the deer’s age, the experience will probably translate into a missed opportunity and unpunched tag. Many shoot first and ask questions later - or ground check, as it’s known in many circles.

The number of places where this style of hunting exists is shrinking, though. State agencies around the nation and managers of private lands are increasingly tightening the rules on how big a buck must be for harvest. The penalties for shooting undersized deer are pretty severe, keeping responsible hunters from pulling the trigger too hastily, which is really the proper way to operate anyhow. Still, private game managers want bigger deer. Public land people often want more deer, and hunters reporting increased numbers of spikes enhances the perception of the hunting quality on that land. Thus, antler restrictions have become a popular tool in manipulating a deer herd.

Just for definition’s sake, let’s say that the goal of any property is to maximize antler potential by restricting the harvest of young deer and removing genetically inferior “cull bucks.” Certainly there are other elements to consider when diagnosing the health of a herd, but these two common objectives are difficult to obtain in the field with hunters of various experiences and sets of standards.

For example, I have a 2 ½ year old, 220lb 8pt on my wall that is an excellent buck now, but there is no telling now how big it may have grown had it avoided my Summit climber that November. Based on his behavior and size at the time, I guessed he’d go 3 ½ to 4 years. But I was glassing through the pines, bucks in this area are notoriously nocturnal, and there stood the biggest buck I'd seen in Georgia up to that point. Bang! Under the theory that bucks should be 5 ½ years before harvest, I screwed up huge. He certainly was big enough to satisfy the rules of the club, but I’ve been reminded time and again that I should have let this buck go. In Kansas, I probably would have. In Georgia where the bucks are spooky, come out of nowhere and return there in a hurry, he is going to the ground every time.

The same year I took this buck, I was forced by club rules to pass on an assortment of spike and ragged horn bucks. To my best guess, they ranged from 1-3 years old; however, their antlers came nowhere close to the 8pt’s, and I doubt they ever would. But I messed up judging the 8pt so how do I know if my opinion is worth anything on these deer?

This is the purpose of antler restrictions - especially on privately managed land. If you have an 8pt that meets or exceeds a 15 inch spread, it’s not likely that deer is getting any smaller in the coming years. Then you have an assortment of misfits that may or may not become anything in the coming seasons. What you don’t want is a paying hunter or club member to tell you how experienced they are and leave it to them to dictate what a cull buck may be or declaring that any smaller buck that doesn't sport a symmetrical basket rack should head to the cooler.

We often have to live with the knowledge that antlers usually aren’t a great indication of age or trophy potential. A decent number of supposedly genetically inferior deer will be allowed to walk in a given season, while some future bruisers are going to be taken too early. It’s the nature of the business in a lot of places.

I’m not really sure if any management system - outside of large private ranches see: Texas - can adequately balance the health of a herd and the needs of the hunters. Too restrictive of a plan on WMA’s and hunters will go elsewhere and game departments will lose money. Too relaxed of a plan will result in a high, unhealthy harvest of young deer.

So what should you take from all of this? Public land and hunt club game managers have their hands tied when trying to realize everyone’s goals whether it is managing a deer herd or satisfying hunters’ desires. If you don’t want to be on a lease or hunt a game plantation that institutes antler restrictions, look elsewhere. If you hunt public land and see a spike and it’s legal to harvest, pull that trigger and don’t apologize to anyone. 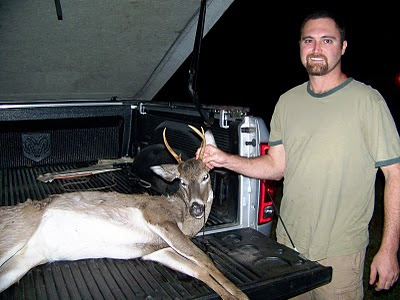 As for me, well, I know I’ve not shot my last spike – by accident or otherwise - but I need more of a reason to do so than in the past. The doe season in Florida has been lengthened, and the other southern states have very liberal doe harvests. They are typically better on the dinner plate anyhow, and I know they won’t be growing any large antlers in the future.
Posted by Ian Nance at 6/03/2010 10:19:00 AM