The Trouble with Spikes and Culls II 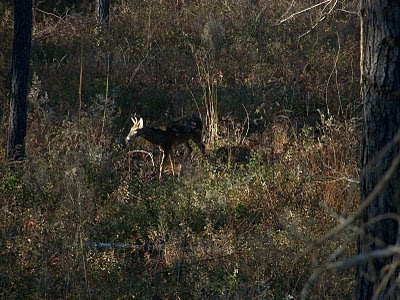 This last fall I received an e-mail from an old hunting buddy and one of the finest outdoorsmen you’ll ever meet. It was a picture of a spike with a couple knobs off the main beams you could call tines, but “spike” would still be the proper categorization. The sender wrote that the deer had gray on its face so he must have been old, wouldn’t get any bigger, and needed to be shot. The deer, leggy and thin-necked, did not appear to be a veteran of many seasons by any means.

Don’t think I’ve not drank this Kool-Aid myself. Hey, when you’ve decided a buck’s antlers are puny because of an alleged deficiency, it’s not a far leap to conclude the rest of the deer’s body must be stunted too. I’ve whacked several bucks in earnest practice of skimming some scoundrel seed from the ol’ gene pool and have stood by and encouraged the death of several more miscreants deemed unworthy of procreating with my fine does.

Last time I wrote about the debate in deer camps regarding the harvesting of spike bucks. Now we’ll advance this concept to include so-called “cull bucks,” or animals whose antlers hunters believe possess a genetic deficiency that precludes them from growing perfect, trophy-quality racks. In theory, removal of these animals will sever their genetic influence from disseminating throughout the herd thereby assuring no spoiled apples, so to speak, in the future. Increasingly, this supposition is being argued as hooey.

Two resources have brought this issue into focus for me. The first is an episode of QDMA Quality Whitetails TV on the Outdoor Channel about the effectiveness of harvesting spikes and culls on trophy potential. Wildlife biologist, Joe Hamilton, discussed three factors that affect antler growth: age, nutrition, and genetics.

Mr. Hamilton suggests hunters “put genetics on the shelf.” Hunters and game managers are more capable of controlling the age structure of their herd and improving nutrition than manipulating genetics, saying that DNA’s influence on antler development is “overrated.”

1. What are your herd conditions, such as buck-to-doe ratio, age structure, deer density, recruitment rate?

2. What degree of control do you have over what’s taken and not taken?

Analyzing the first question, Mr. Brothers addresses, in a round about way, if there’s not a better way to grow antlers. In a simplified explanation, if the buck-to-doe ratio, deer density and recruitment rate is too high, the elimination of does will increase browse, supplying more nutrition for antler development. If a deer herd is too young, hunters may not be observing the full potential in the area.

The second question is particularly salient for anyone who manages deer. If one elects to let a buck walk, what assurances are there that this patience will pay off in the future? Smaller leases and properties routinely run into this issue. Hunters may not realize the fruits of their labor if those surrounding them do not engage in similar management goals. Educating and convincing neighbors about a deer management mission could go a long way towards establishing a healthy, trophy-producing herd.

The second resource is an excellent article by Wildlife Biologist Chris Cook I saved from the December 2008 edition of Woods ‘n Water. The thrust of Mr. Cook’s argument posits that there’s insufficient research, knowledge, and understanding of whitetail genetics to justify culling bucks as an effective trophy management practice.

Mr. Cook brings a fresh argument to the table – the genetics of a doe have just as much, if not more, influence on the health of their fawn as the sire. How can you judge trophy potential from a slickhead? Additionally, he wonders how thousands of years of breeding will be erased in a few seasons by hunters?

So what causes one young buck’s antlers to blossom into those that give us the nervous sweats in the stand, while another’s poke straight up like daggers, or are broken and jagged like a hockey player’s smile?

Mr. Cook states lack of nutrition is one factor, but physical injuries to the animal may cause abnormal or underachieving antlers as the body focuses on repair. Drought and environmental factors influence growth. Also, damage to the pedicles, or the soft, growing bases of the antler, will cause malformed horns that can take a year or two to mend. Regardless, numerous variables influence antler growth and may actually stunt inherent genetic potential.

What does all this mean to game managers who’ve allowed this concept of cull bucks to seep into our culture? It means, and yes I quote Yoda, we must unlearn all we have learned. It is certainly true some bucks just won't grow B&C antlers; however, they should be allowed to age a few years before making this determination. Those big ranches in Texas that offer management hunts aren't serving up 2 year old spikes and raghorns. They are 5-6 year old bucks that have maxed out their antler potential, and are approaching the back side of their prime breeding years. At that point, it's not that much different than eliminating a few does to improve browse. Learning to age deer is the key, and the old-school methods - gray hairs, thick pedicles, just saying it's old to salve the conscience - won't cut it. The proliferation of trail cameras will be a big help in coming years. Also, I'd recommend taking jawbones of all harvested buck to the local biologist for aging. 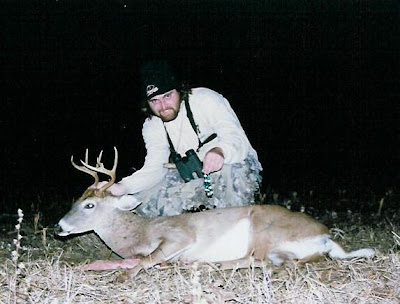 It appears hunters can do very little to influence the genetics of a herd and may do more harm in their quest than good. Improving browse and nutrition through fertilizing procedures, supplemental feeding, controlled burns, amongst other methods, while working to reduce the number of does in the herd is recognized as the standard for growing big racks. This and allowing younger bucks - even spikes and culls - to walk will pay off in the future when seeking that wallhanger.
Posted by Ian Nance at 6/05/2010 03:12:00 PM