The Means to Attain a Happy Life

The Tudors is one of those TV shows that your girlfriend forces you to watch against your will. Eventually, though, you find yourself planning Sunday evenings around the damn series. Despite whiny protests, it took me a year to succumb. Thanks Showtime.

Really, though, I do like history programs, and The Tudors fits that bill. This Sunday is the series finale.

Over the course of four seasons, The Tudors has delved into the life of King Henry VIII, the once proud, athletic king who descended into murderous gluttony, paranoia, and madness. From Season 1 to the end, a ceaseless parade of caricatures of history's characters have graced the King's presence only to have their heads lopped off due to his intolerance and the scheming of ambitious sycophants.

Of the most fascinating of these people is Season 4's Henry Howard, the Earl of Surrey. Surrey was born of noble blood and all too aware of it. His arrogance and haughty behavior landed him behind stone walls on more than one occasion, but he held the king's favor, probably because he was a distinguished field commander in battles against the Scottish and French. In contrast to his brutish and boorish attitudes, he was one of the forefathers of Renaissance poetry, the sonnet, and blank verse. His work is thoughtful and quite graceful. 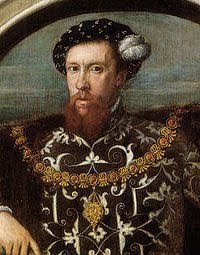 As he is escorted out of court and to the axe, you hear the voice of his portrayer, David O'Hara, read one of his poems that the directors saw fit to capture the moment.

Hearing it, and later reading it, I felt it worthy of sharing.

MARTIAL, the things that do attain
The happy life, be these, I find :
The riches left, not got with pain ;
The fruitful ground, the quiet mind :

The equal friend, no grudge, no strife ;
No charge of rule, nor governance ;
Without disease, the healthful life ;
The household of continuance :

The mean diet, no delicate fare ;
True wisdom join'd with simpleness ;
The night discharged of all care,
Where wine the wit may not oppress :

The faithful wife, without debate ;
Such sleeps as may beguile the night.
Contented with thine own estate ;
Ne wish for Death, ne fear his might.

I've thought much of the pleasures of hunting - as I always do - as I've read over this time and again. The fruitful ground and quiet mind of the fall. The friends between the camps and the continuance of tradition through sons and daughters. Drinks with a simple steak and politics cooked on a fire, but not so hard on bourbon that you rest in the bed that night ruined.

Email ThisBlogThis!Share to TwitterShare to FacebookShare to Pinterest
Labels: Earl of Surrey, Henry Howard, The Tudors

I fell in love with this poem through The Tudors. Although Surrey is highly exasperating, to show his work as a poet and especially on this epigram by Marial was a terrific idea. So, as you said, thanks Showtime :)