I have a wound in my left foot that is taking its sweet time to heal. A couple weeks ago at Indian Rocks Beach, I drunkenly stepped on the rocking part of a wicker chair, snapping the wood. What remained looked like a telephone pole victimized and splintered by gale winds. Naturally, the next morning I impaled my foot on that disaster. My profanity is probably still floating across the Gulf, unless it was trapped by oil and drowned.

I, as most outdoorsmen do, have an assortment of bizarre injuries that scar the body. Pride. Stupidity. Clumsiness. They all know my name and have left their marks. The hunting life, for sure, has induced a few doozies.

Towards the stupidity side of the spectrum, I examine the calloused, tobacco stain-colored knot on my right hand. I’d just shot my first gobbler and I ran to the bird to secure it…do I need to keep going?

OK, as the tom flopped around, I reached to grab him and he put his spur clean through my glove and into my palm. I was so excited I didn’t notice it at first. At first. Pretty sure that won’t happen again. Well, at least until it happens again.

My fingers are unfortunate tributes to knife cuts, fishing line burns, and even a barracuda bite I received from a dead barracuda as I rigged him up for shark chum. The most sinister of these is the bonesaw scar that snakes down my left index finger.

When I was younger, the guys in camp proclaimed I was an expert at sawing antlers off a buck. At the time I was like, “Hell yeah, I am!” Looking back now, I realize what a Pain in the A performing such a chore is, and the guys were just dumping their load so they could rig up a nap or drink.

One guy, Tim, brought me a fine Florida seven point to scalp. Despite my professionalism, I had difficulty with this one as the antlers swept back far enough to prevent getting a decent angle with the meat saw. Plus, when you're young, being proficient at something is equivalent to doing it fast. Anyway, I’m glad I’m not the youngest in camp anymore. 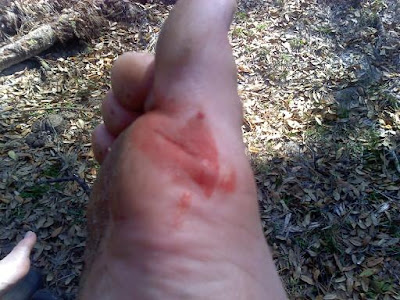 I have, to the best of my recollection, 4 different machete carvings in me, though I have been lucky to avoid any hatchet wounds. Scorpions don’t leave scars, but they tag me often enough to believe I’m a targeted man. Creeping up the stocks of scoped rifles has clipped a divot or two from my brow. But few of these are very serious. My right arm is a different story.

About eight years ago, Dad and I were driving through the 1000 Acres in his 1986 blue diesel Suburban. It was a tank. At one point on the trail, the road narrowed between the barbed wire fence and an ancient pine. I thought the pine would bang against the sideview mirror and reached to pull it in. Somehow, my arm got trapped flat-palmed against the pine trunk. I yelled and Dad stopped the truck.

Pulling my arm in, I thought it had broken. A crease had been left in my tricep without bursting the skin. Took a minute for the panic to subside to remember my anatomy - the upper arm has one bone, not two like the forearm. The tricep was screwed. It went black and blue in a hurry and filled with fluid.

Probably should’ve visited a doctor. Swimming, playing darts, anything that requires heavy or consistent use of that muscle is painful, even today. The crease remains, too. Pretty lucky it didn't break.

The worst of the worst, the crème de la crème, the Darth Vader of injuries occurred to my lower back.

In 2006, I had dragged a 220lb. buck out of the Georgia woods. The temperature had not yet hit 30 when I arrived with him back at my old, white Dodge Ram. Sweating in my thermal gear, I'd stripped down to my long johns to - strangely enough - cool back down and catch my breath. I climbed into the bed of the Ram and grabbed the buck by his antlers. As I heaved the behemoth over the tailgate, my boots slipped on the layer of ice that had frozen over during the night.

Both of my feet shot out from under me, and I landed butt down on the bed. I darn near bounced out of the truck. At first, I was embarrassed. It would have been a YouTube sensation. Then the pain started. That night I shifted funny in bed and my days of enjoying boat rides officially ended. Slogging through marshes in duck waders is murder, as well.

Of course, I am too foolish to visit a doctor. Occupational hazard, I always say, though this line of thought doesn’t attract much sympathy. Besides, if the back starts hurting, I can always pour a drink.

Nice post there Ian! I found my self laughing, then crying, at your antics. Why crying? Well I injured my tail bone whist riding that lil' red truck around at the camper while drinking the other weekend so now it hurts when I move. Laughing causes movement ya know, so laughing equals pain. But the pain is worth it to know I'm not the only one who has mishaps after the bottles been opened!

Nice work on the foot! Hope it heals soon because the other could be in jeopardy at your next outing!

Ian...sorry about your accident on your foot. Gosh, you have been through it man. Take care of yourself and don't let it get infected...it CAN get worse. Hope it heals up soon and you will be back to normal my friend. :)

That is actually a different foot injury picture. Probably should wear some shoes