I love this. Just in case you can’t read the text from my sorry camera phone picture: 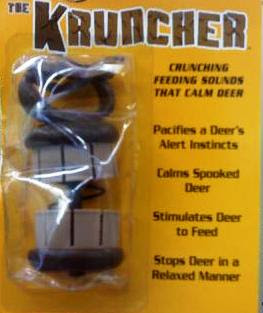 “Stops Deer in a Relaxed Manner.”

What will they think of next?

I have to be careful because I do represent Mossy Oak and I’m not sure who all they are in league with, but I had a good laugh at Wal-Mart last week. If it’d been on the other side of Christmas this could have ended up in a few stockings.

My best guess is that a hunter mashes this thing together to resemble the sound of a whitetail feeding and this, what, calls in deer? How close does the animal have to be for this to work? And how does the deer discern this noise from the cacophony of crows cawing, owls hooting, turkeys clucking, and squirrels themselves crunching on acorns? I suppose some things are best left for the eye to witness.

The thing is if you’ve arrived at the point where you’ve bought the Kruncher, you probably own every other grunt call, bottle of deer urine, rattling bag, and doe bleat that’s hit the market. No way can this be any outdoorsman’s first call. Reminds me of a hair loss lotion or male enhancement product you see advertised – you’ve tried the rest, now try the best! A hunter’s own chance at battling their deer hunting insecurities.

Gadgets, by definition, are devices that probably aren’t worth what you paid for them regardless of price. Hunters are a gadget-intense bunch. I’ve had my own. My very first, as I recall, was a boot knife I purchased at a gun show for ten bucks when I was twelve. Functionally, it was about as practical as my nipples, though it did possess the same aesthetic appeal. The “blade” was some aluminum/plastic compound that was only fitting for throwing into the sides of trees. Not much help skinning a hog. All the guys in camp were realllll impressed. Or nervous. Pick one. The vendor at the show had no qualms hawking it to me, and I’m sure has slept fine since.

One year in college I acquired a “Spit & Drum” turkey call from a manufacturer I’ve long forgotten. It came with a video. One half looked like - and probably was - the mouth piece from a standard grunt call and made a very similar noise. The other side was a rubber ball somewhat resembling the float in the back of a toilet. The concept was to blow on the grunt tube end to simulate a gobbler drumming, then you flipped it over and slammed the toilet float half on your leg creating a sharp hissing noise, that, I guess, sounds like a tom spitting. It left bruises.

Now, I’m not a professional turkey hunter by any means, but the first rule of this sport, clear as I’ve understood it, is to stay as still as possible; I don’t see how this fit in to that strategy. Same goes for the plastic turkey wing I once bought and toted for years. It worked for the guys in the video. It’d be probably noon judging by the sunlight when they would spit and drum, and sure enough, the camera would cut away to a gobbler beelining it to the decoys, though it was much darker outside then for some reason.

Gadgets have a powerful pull against one's common sense. For a large portion of the county - who nonetheless sees this regularly occur on TV at a variety of exotic private locales in Texas - rattling antlers are pretty serious, make-your-hands-bleed gadgets. I dutifully carried a pair for years and would clack away, nervous I'd be stormed by Mucho Grande before I could hoist my gun or bow. Can't say this turned out to be an issue. But one day I had an epiphany:

“Ian, you’ve paid God knows how much money on the latest camouflage to hide in the trees, have driven many miles for a chance at a buck, and you’re out here waving your arms around and banging horns together just making a racket? C’mon, boy! Sit down and be quiet.”

It’s is remarkable the number of bucks I’ve killed since this enlightenment.

Once upon a time I had a plastic polymer shooting stick. As a teen – yes, a teen – I fancied myself a big-time pistolero. Carried a Ruger Redhawk .44Mag in a shoulder holster with two speed clips totaling 18 rounds of kick butt awesomeness. Well, I’d seen in a magazine where this other big-time pistolero used the exact stick with his .44 to hunt caribou. Not having a prevalent population of caribou in Central Florida, I figured it could at least translate into a useful hog hunting tool.

One evening a member of camp came out of my tent, presumably in there perpetrating some prank, with my shooting stick in hand. I won’t repeat the fire-side jokes and sick sexual innuendos here because there may be children reading, but to this day I still catch grief. Someone claims to have it and is waiting for the proper time to abuse me with it for old time’s sake. I showed them, though. I bought a bipod.

Perhaps my favorite gadget, that I’m proud to say I did not buy, was a little key chain device that when you hit a button it made a sound like a corn feeder spinning off. Now, I’ve seen deer and hogs and turkey literally run over each other at this noise before on private lands, but I have laughed myself to tears on the stand thinking of some hunter in the Green Swamp or some other public land romp-and-stomp hunkered by the tree, pressing this button, and grasping his gun in eager anticipation. Wait fifteen minutes, hit it again – standard deer call instructions. Maybe if he or she had a Kruncher to make it seem more realistic it could have worked.

Truth is, we rarely stop buying gadgets; they just get more expensive and sophisticated. This is especially true as we branch out from hunting just one species. Duck hunting is a mad disease. I have robo-ducks and bags of decoys, including some now that don’t have heads to make it seem like they are feeding. I recently acquired a 3 ½ magnum though I duck hunt maybe four times a year and would miss most in-flight waterfowl with a heat seeking missile.

Turkey hunting can get ya – all the scribes say you can’t have too many calls. These scribes also tend to go on industry-sponsored hunts. And predator calling is bad, too. Have this device that flips a cotton ball thing around in erratic circles. A hawk is gonna take off with that some day. Goodbye, eighty bucks! Have a digital predator call that has, of all things, terrified chicken calls, fighting toms, wounded wombat, and annoyed anteater.

It’s all in fun. The Kruncher may fill a void in some hunter’s daypack and lead him or her – though “her’s” are much less apt to buy such things – to Boone & Crockett glory. And really, I think there is still an untapped market. Just think of the other bodily functions we can simulate from your favorite game animal! Combine doe estrous with a water bottle and we have the Urinator – wait, I think that is the name of a narcotic masking device.