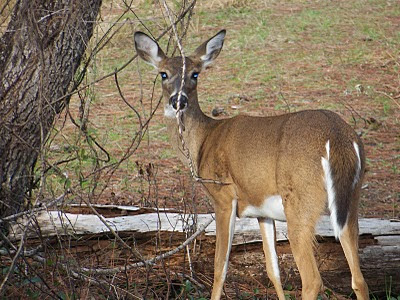 Sure, the campsite was a private paddock of palmettos, deer and turkeys ran wild – well, they ran semi-tame – throughout the park, and I was in good company, but I gotta tell you, the highlight of the trip was the restroom facility. The showers – the showers were immaculate. 10 minutes of high pressured hot water sans shower shoes, the perfect hangover remedy soak, you know, if Beam drinking were allowed in such areas. If nothing else, it blew off the oak smoke of the towering campfires I’d build to keep the wild beasts away, though one old drunk did stagger right through our camp without speaking a word, and the occasional child poked a nose in to watch the Olympic-level competition of our cornhole tournaments. 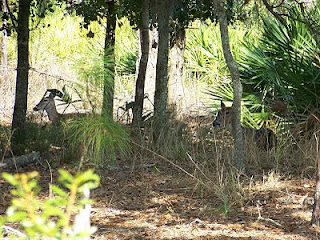 Lake Kissimmee State Park is located a few miles north of SR-60 just east of Lake Wales. Nestled between Tiger Lake, Lake Rosalie, and Lake Kissimmee, the park is a tiny taste of old Florida landscape. The fire-kissed pines and palmetto flats shelter an abundance of wildlife including the aforementioned game species, sandhills, eagles, owls, and a host of tweety birds. With 13 miles of hiking trails and photo-friendly animals, there’s a little something for every wanderer. 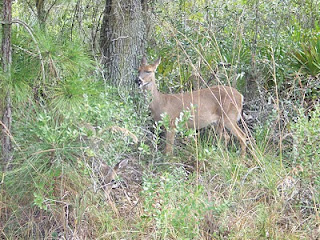 It’s been years since I’ve been camping. Most of my recent hunting excursions have come with roofed lodging. Though I had an air mattress this trip, my back is always one bad sleeping experience away from being a wreck. So tent camping hasn't been a draw in years, and I didn't really know where to go anyhow. Luckily, my good friends Chad and Kelly had visited the park in October and returned home with photos of deer and a couple huge gobblers. I was hooked. They booked a campsite, and Carolyn and I signed on, as did Jeremy and Brooke, Chad and Kelly’s neighbors. 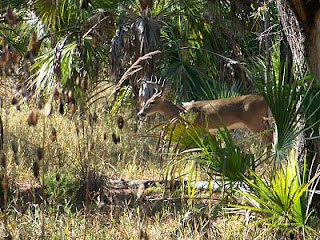 Camping always turns into a let’s-see-how-much-junk-I-can-fit-in-my-truck affair. Three coolers, a tent that you could take batting practice in, sleeping bags and related accessories, firewood (I guess they have a problem with you chain-sawing your own), and various other sundries. You don’t want to be unprepared. Case in point, Jeremy showed up with a knife strapped to his belt. No way could I let this go unchallenged. Chad snuffed out that contest with a machete. I also failed in the flashlight comparison. I am no man.

Amongst my crap, I tossed the turkey calls in the truck. Do you know how annoying it is to others when you yelp out an assembly call in the twilight hours? Very, as I was reminded. I joked – and I use the word “joke” lightly as I was the only one entertained – about bowhunting here. Wouldn’t be much of a challenge. Three minutes in the front gate and I was already snapping my first deer pictures, a doe and a yearling feeding along the road. Ironically, this was the last weekend of deer season for this portion of the state. Within 12 hours of setting foot on this property I’d seen more bucks than I had the entire fall. Grrr. 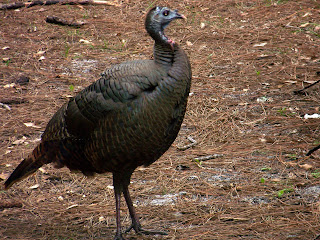 The turkeys, too, ran amok. I never did catch up with an old longbeard as I’d hoped, but did run across a bearded hen, though she was quite camera shy. Her lady friends weren’t, thankfully. Riding back to camp from a late afternoon Nature Cruise, we spied a doe and hen feeding beside someone’s camper trailer. “They just don’t know how delicious they are, do they?” Carolyn pondered. Still, that’s fast company for any nature enthusiast. 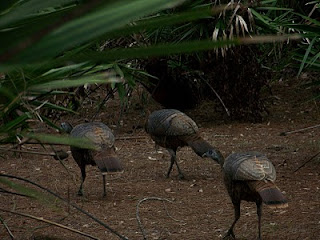 The Other People are always a hoot. I’m not sure where they shop, but I somehow missed the memo that proper camping attire was required. If you don’t know, getting back in touch with nature requires some serious fashion considerations. Never mind you could sport a Hawaiian shirt and skip down the road firing off Roman candles without spooking the game, you have to look the part to be accepted in this crowd, probably why they shunned my board shorts and T-shirt. If I had to describe this whole granola look, I’d go with “floppy.” Floppy hats, floppy shirts, floppy upper arms.

Our camp setup was pure pitiful compared to the RV’s muscled in here from places as far away as Washington and Maine. One group of tourists, their skin colors various shades of pale, hung those pink and purple wind dancer things from the awning of their portable porch. I recall ol’ Lewis Grizzard when he said, “Yankees can be tacky, quite frankly.”

The redneck coalition was well-represented, too. A steady parade of bass boats marched down the winding roads to the ramp. I don’t bass fish, but I know this is an excellent area for it. The distant din of airboats was a 24/7 phenomenon. God knows what anyone is doing on Lake Kissimmee at 11 p.m. running around in an airboat. In the mornings you’d hear the shotgun blasts of duck hunters, and I couldn’t help but wonder if they were covered with teal and ringnecks or just blasting coots off the water. 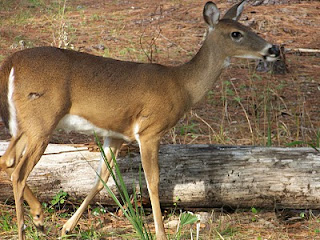 I do hope the cattleman at the end of the Cow Trail wasn’t startled by this noise. He might have thought the Indians were attacking. As it was explained to me by Chad, the Cow Trail is one of those "Journeys into the Past" out-of-state tourists drool over. It culminates with an actor playing the part of a Florida Cracker adorned with a bull whip and mannerisms of the Old Timey variety. “You here to buy or sell?” was the lead-in to his routine. The secondhand embarrassment would have slain me had I attended his act, but then again I’m not ten. As the story goes, he had been walking his three cattle for days and needed a rest. Perhaps he should wing into the Liar’s Lair bar across the road from the check-in station for some Karaoke and a sarsaparilla.

It does the heart well to know places like this exist. A Boy Scout troop wandered around the boat ramp as snowy folks on bikes took in the beautiful Florida scenery and weather. That land is never going to be developed, and it’s there for everyone to enjoy in their own little way. And though I’m an advocate for opening up as much land as possible to hunters, seeing unthreatened wildlife is a treat. I hopped out of the truck at one point to snap a picture of a feeding doe when, from out of the palmettos, a chocolate-antlered eight point emerged, careless to his dire situation of standing in the presence of a near-mythical deer slayer. 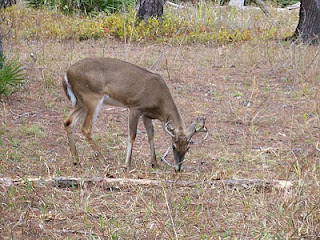 My closest encounter with wildlife I don’t even recall. Carolyn asked me Sunday morning if I remembered the armadillo assaulting the tent. Apparently, it kept bumping into the tent canvas and startled me quite a bit. She said I was about incoherent and panicked. I think she made it all up. Or, that’s what I’m going with at least. If I'd had a bigger knife and brighter flashlight I might have felt safer.

As I stood outside the bathroom area collecting my towels and toiletries Saturday morning, I heard two different hens yelping from the pines in the camp area. It is a tame version of nature, for sure. But let me tell you, it was a grand experience. If you’re looking for a camping trip with your kids, friends, or significant other, I’d give Lake Kissimmee a hard thought. The rangers were kind, cost of admission reasonable, the campsite spread out enough so your neighbor isn't bothered by your shenanigans, and there's plenty to do. The showers are probably cleaner than your ones at home. Not all state parks are as accommodating.

Speaking of machetes, MacheteSpecialists.com has a ton of different types of machetes from all over the globe for sale for use by survivalists, gardeners, campers, farmers, etc... If you have a specific use, this machete styles page helps you find the perfect machete.