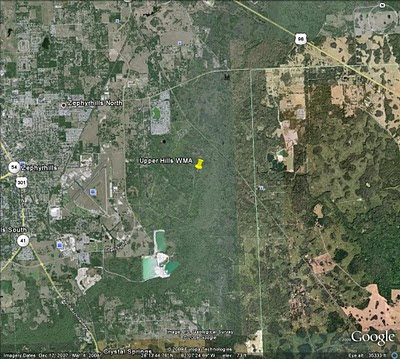 That sugar or scrub sand that is so prevalent in parts of Central Florida is some nasty stuff. One spring I feared a rain-soaked road of it would swallow Dad’s old diesel suburban. I'd paused to glass an open field for gobblers and happened to look down as this quicksand enveloped the tires. We were sinking. Luckily four-wheel low chugged us to safety.

In the summer, this dirt is baking hot. It’s inhospitable. Snakes love it, as do scorpions and spiders. And during any time of the year, game tracks are distorted to dimples making it impossible to discern what had passed through. At the very least, this ankle-turning sand makes even a simple hike seem like an interminable hump through the desert.

This weekend, though, the sand was frozen hard. Only with a quick bounce would the earth give way to crumble. Other than that, it was like walking on pavement. And in the pre-dawn darkness of Sunday morning, the trail to my stand sparkled in the flashlight like one of those whiny Twilight vampires. Twenty-four degrees the truck thermometer read. With apologizes to my Northern friends, that’s cold here, easily the coldest I’ve hunted in the state of Florida. Icicles hung from palmettos and scrub oaks. Saturday, the sleet pelted me in the tree stand as I got texts from my sister saying it was snowing in town. Record lows throughout the state. Weird.

Just for fun I’d spit on the rail of my Summit Viper to see how long it’d take to freeze. My phone kept shutting off mid-text or Internet search, the circuits seized by the cold. And the tweety birds in the tree ahead of me looked like little brown cotton balls or monster dust bunnies as they gripped their perches with ruffled, shaking feathers. The woods were quiet. This made it all the more surprising when the coyote showed up.

In all honesty, on public land, in this weather, almost any warm blooded mammal was going to catch an arrow, a coyote especially. But, I always underestimate them. As he trotted behind some bushes following a trail that’d lead him within 15 yards of my stand, I stood to draw. How he saw me through the myrtles, I won’t ever know, but between gaps in the branches I saw him lift his head, gaze the 20 feet up the pine where I stood, raise his tail and bounce right out of the area.

And that was it for my Upper Hillsborough WMA bowhunt. Spent just shy of nine hours on the stand between Saturday evening and Sunday morning freezing my keister. Strange thoughts dominated my hunt.

“I wonder how warm it’d be if Han Solo showed up and rolled Tauntaun guts on me?”

“How the hell did the Jets win/Cincy blow that game?”

“I bet they find me clinging to this bow like Hatchet Jack.”

I guess my other moment of excitement was when the bottom half of my climber escaped me during the descent down the pine. Dressed in so many layers I wasn’t exactly limber, and I was in a big hurry to return to the seat warmers in the Dodge.

Anyway, in haste, I didn't exercise the proper caution I normally would this high up and failed to properly secure my boots in the holders. As you can guess, they slid out and the foot platform went bouncing down the tree, settling cockeyed against the trunk when the safety line – the same line that had recently been tied back together; not confident it would stay together – took hold. I’m tall, but I could just barely extend my boot toes to touch the suspended half. I contemplated the situation.

“Dad’s on the other side of the property, I have the truck and keys. It’s 30 degrees and I’m still at least 15-16 feet up this pine. Hmm. After the fall do I bleed out, freeze to death, or does the coyote finish me off?”

I’ve always said safety straps are for those afraid to fall. I’ll be buying mine before September. I took a breath and used my 3rd grade gym training to lower myself on the rails of the upper half of the stand like balance beams. I managed to get low enough to jockey the foot rest back onto the tree, then slowly worked the stand back to the ground. By the way, my flimsy gloves helped none on that cold metal. 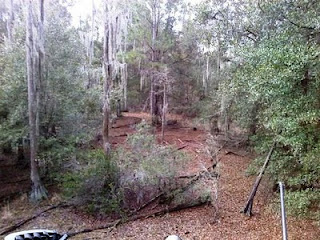 Ugghh. At first glance, the spot I sat was a goodie though it was close to a road, usually a no-no for me when hunting WMA’s. My original haunt had been violated by a lock-on some miscreant had erected on converging trails in a transition zone between a thick cypress head and palmetto flat I’d scouted months prior. Compromising, I wandered a few hundred yards to the west and settled on my location thanks to a fresh rub on a well-used trail. I fell victim to that temptation, ignoring some of my common sense.

For starters, there wasn’t crap for them to eat here unless they headed for the palmetto flat, which I expected them to do. But then again, I was hoping the deer would venture into the open on public land, which is foolhardy in itself. Tracks pummeled the firebreak road walking in, but who knows when they were made or what time. Wish I had spent more time scouting, but it was a busy fall and winter.

Dad had it right. He hung his climber on a shift between the tall pines and an open cypress swamp. In the swamp there was still some browse, and the scrub oaks surrounding the area were dropping acorns. He saw four deer, including a nice buck that was a little out of range.

On the ride out Saturday night, some guy had a little six point hanging at the cleaning station. It was a scrub buck for sure – small body and spindly antlers, but good for that hunter enduring the cold and coming out on top. I thought about that buck all night hoping to get my chance, but it wasn't to be.

And like that, my deer season is over. Fitting the weather was so strange as it has been since September when I started. Looking forward to finishing off duck season and maybe some hog hunting. For sure, I'm taking my predator calls back to Upper Hillsborough to settle the score with one coyote.